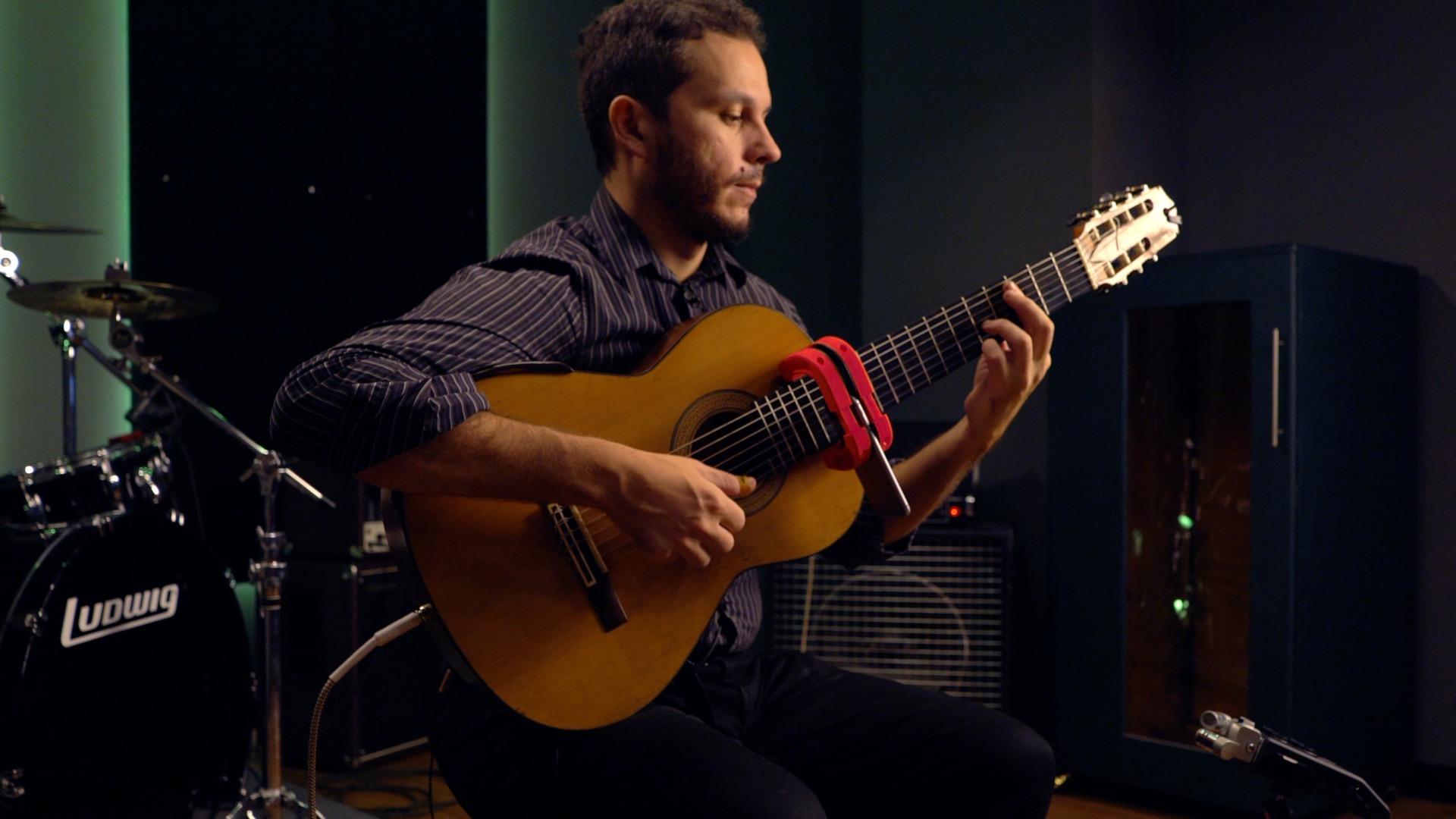 Pour yourself a caipirinha and grab your thumb picks because the awesome César Garabini is taking us on a trip to Rio for an introduction to the beautiful and grooving sounds of Choro guitar.

Choro, from the Portuguese word for “cry” or “lament”, is a uniquely Brazilian form of jazz which developed over the same time period as Ragtime and Dixieland in the States. Typically arranged for small acoustic bands lacking a bass player, choro’s rhythms are instead supplied by a seven-string nylon guitar.

Played with thumb pick and fingernails, its trademark grooving bassline or baixaria blurs the distinction between accompaniment and lead, frequently reaching up beyond the baritone register in intricate harmonized duels with the bandolim, or Brazilian mandolin. For a classic example of this sonic jousting, look no further than the opening song from the interview, “Um A Zero”:

The duet “Um A Zero” is one of the most well-known compositions by arguably Choro’s most influential exponent, the composer and bandleader Alfredo “Pixinguinha” da Rocha. Its rolling arpeggiated melodies and complex contrapuntal interpay, tackled here by César and the the fearsome Olli Soikkeli on flat pick archtop guitar, are a textbook introduction to the style. The fullness of sound and rhythm these two players laid down is way more than the sum of their parts, and seriously one of the coolest performances we’ve ever filmed in our studio.

Choro instrumentation is really interesting, relying on a seventh string tuned to C. This is only a major third below the typical low E string, and technically only offers a few more scale degrees of bass extension. But in actual practice, the voice of Choro guitar is an immediately distinct blend of a baritone and standard-range instrument.

But it’s not just the same chords and leads played a little lower. Spreading that increased sonic real estate across another physical string enables a range of chordal and comping possibilities that simply aren’t possible on a six-string guitar. The result is a uniquely pianistic playing style incorporating bass, harmony, and lead voices in a single performance.

In Magnet view, the driving force of choro technique is immediately apparent: the thumb. Experienced Cracking the Code viewers will immediately note the downward pickslanting orientation of César’s thumb pick and escaped upstroke, or “USX” picking motion he employs. You’ll be reminded of Gypsy technique, with its emphasis on downstrokes and downstroke sweeping, and of course the famous thumb technique of Wes Montgomery.

And in both cases you would be right on target. Choro guitar employs many of the same mechanical devices that Django did, including downstroke rest strokes and rest stroke sweeping, even during scalar passages. And Wes’ ability to alternate pick with the thumb alone is also present, as is his use of hammer-ons and pull-offs to streamline high-velocity passages. These standard DWPS economy devices are expanded by way of hybrid picking, with both the index and middle fingers pitching in for phrases which involve rapid movement between pairs of strings.

One of the things that make this interview such an enjoyable introduction to the choro style is César’s clear-eyed explanations of how all these parts all fit together. Like many of us, he started out as a rock and pop player, so his personal story is instantly relatable. It’s enough to make you think you could pick up a cheap seven string and a thumb pick and get some of this South American vibe happening in an afternoon, even if your rational brain knows it takes years to build his level of fretboard knowledge. But one of the hallmarks of great musicians like César is that rather than intimidate us with their technical brilliance, they inspire us to imagine what’s possible, and to go forth and fearlessly explore more music.

The one-hour interview contains 76 musical examples with tablature, with complete transcriptions to four songs. Included are César and Olli’s barnstorming duets on the choro setpieces “Um A Zero” and “Alumiando”, as well as Cesar’s solo performances of the Antônio Carlos Jobim classic “A Felicidade” and the jazz standard “After You’ve Gone”.

Watch it now with a download purchase, or stream it on the Cracking the Code platform with a membership.