Pour yourself a caipirinha and grab your thumb pick because the awesome César Garabini is taking us on a trip to Rio for an introduction to the beautiful and grooving sounds of Choro guitar.

Choro is a jazz style that originated in the latter half of the nineteenth century in Rio de Janeiro. Its rolling arpeggiated melodies and complex contrapuntal interplay recall American jazz of the period like Ragtime and Dixieland, but its emphasis on African rhythm and strings-heavy instrumentation is uniquely Brazilian.

Typically arranged for small acoustic bands lacking a bass player, choro’s driving rhythmic force is instead a seven-string nylon guitar. Played with thumb pick and fingernails, its trademark grooving bass rhythms blur the distinction between accompaniment and lead, frequently reaching up beyond the baritone register in intricate harmonized duels with the bandolim, or Brazilian mandolin.

In our interview with César we take a closeup look at how choro picking works, including César’s virtuoso thumb technique and its sophisticated handoff to picado for leads on the upper strings. We talk about how the additional bass string, tuned to C, dramatically expands the chord voice and comping possibilities of the instrument. Finally, we dive into improvisation and the kind of homework César does to build a rich vocabulary of ideas even in less guitar-friendly keys.

The one-hour interview includes 74 musical examples with tablture, with complete transcriptions to César’s duets with flat pick jazz virtuoso Olli Soikkeli on the choro standards “Um A Zero” and “Alumiando”, as well as Cesar’s solo performances of the Antônio Carlos Jobim classic “A Felicidade” and the American jazz standard “After You’ve Gone”. 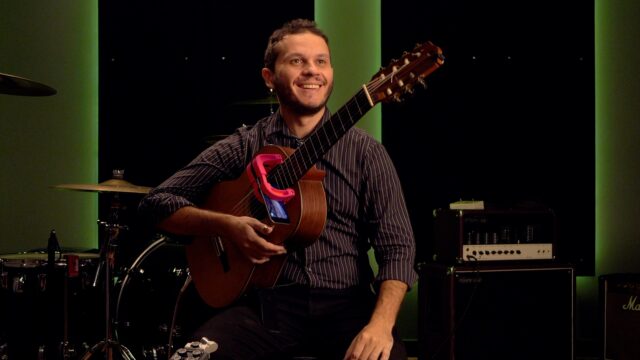