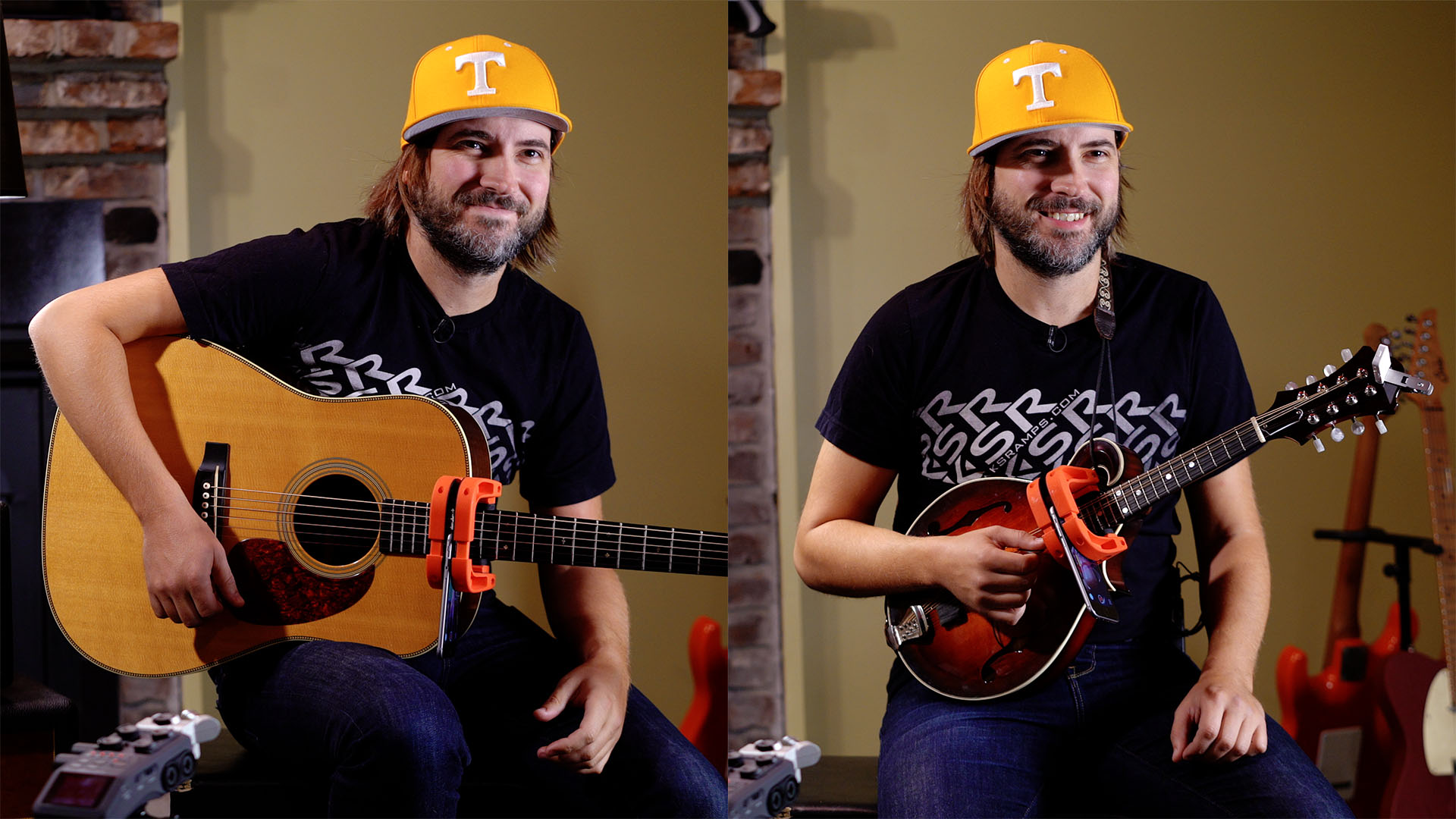 Our second interview with Andy Wood is a spectacular showcase of acoustic prowess, and a treat for aspiring multi-instrumentalists.

The comprehensive two-hour conversation covers the mechanical differences between guitar and mandolin picking technique, with a comparison of three bluegrass standards on both instruments, along with over 140 slow motion examples with tablature.

Check it out now on the platform: The Andy Wood Acoustic Interview.

When we first met Andy, we didn’t know what we were going to see, and after getting a look at the wide variety of things he does mechanically, we wanted to ask him some more pointed questions. At two hours, the new interview is filled with targeted discussion of Andy’s killer array of movements.

On both electric guitar and acoustic guitar, Andy is probably the most textbook example of two-way pickslanting we have filmed. He is the archetypal “primary pickslant” player: he uses a default orientation, in this case upward pickslanting, but effortlessly reels off sequences of rapid-fire rotational movements to get in between two strings when the phrase requires it. You’ll see him do this for blazing country-style open position riffing, as well as mid-fretboard “shred style” mixolydian scale playing. Cross compare with the selection of scalar examples from the first interview, and you can see this movement adapt from the big box Martin D28 acoustic to the smaller, slab body Suhr.

Likewise, we thought it would be informative to watch Andy play the same pieces on both acoustic guitar and mandolin. The body shapes are so different that Andy does indeed have somewhat different techniques on each instrument. We discuss Andy’s mandolin crosspicking technique in detail. He uses a supinated setup and the resulting movement, what we call in the interview the “smiley-face” movement, might be obvious to us as viewers when we’re watching him, especially in slow-motion. But to Andy, the distinction between this and the two-way pickslanting approach he uses when he speeds up is apparent only as a difference in rhythmic feel.

The various cross-comparisons we do in this interview are useful to players interested in both instruments, sure. But they are of general interest to anyone looking to understand how instrument layout, arm setup, and pick grip affect picking technique. We talk about all of these things in detail. You’ll see some good closeups of Andy’s grip and how it affects his ability to use finger movement for string changes, and to perform alternate picked arpeggio sequences.

Andy and Andy: The Duets!

Finally, we’ve assembled a selection of duets, guitar and mandolin, from three of the standards that Andy played:

We didn’t intend to combine the tunes this way, and these were not recorded to a click. But the tempos were so close that only minor edits were necessary to get them to lock up. Even in the one case where more deliberate tempo mapping was required to make the match, the resulting blend was such an awesome look at how a great player improvises that we included it anyway.

Check out our “Behind the Scenes” feature on Andy’s always musical sense of time that allowed us to sync up the duet performances!