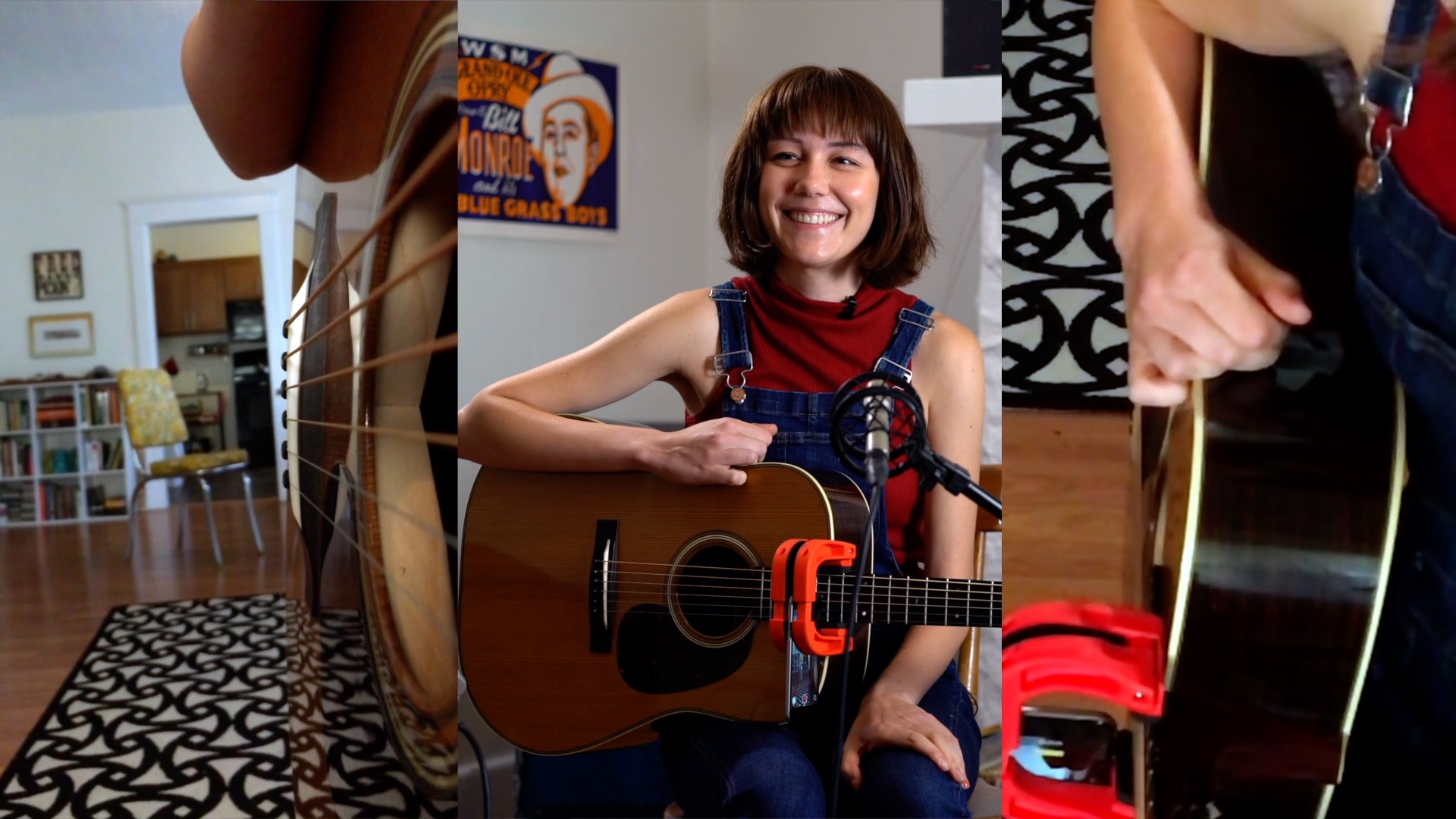 Molly Tuttle’s take on the Townes Van Zandt classic “White Freightliner Blues” has quickly become a signature tune, and a showcase for her astonishing flat pick skills. Watching her switch effortlessly between rhythm comping and high-velocity single note lead lines is like listening to at least two guitarists at once. In this clip from her Cracking the Code interview, she gives us a closeup look at the way these two awesome techniques intertwine:

Molly Tuttle’s right hand technique is a melding of several uniquely virtuosic picking approaches. For traditional bluegrass “boom chuck” rhythm playing, Molly uses what we might commonly call a “floating” approach. In truth, this is a bit of a misnomer: 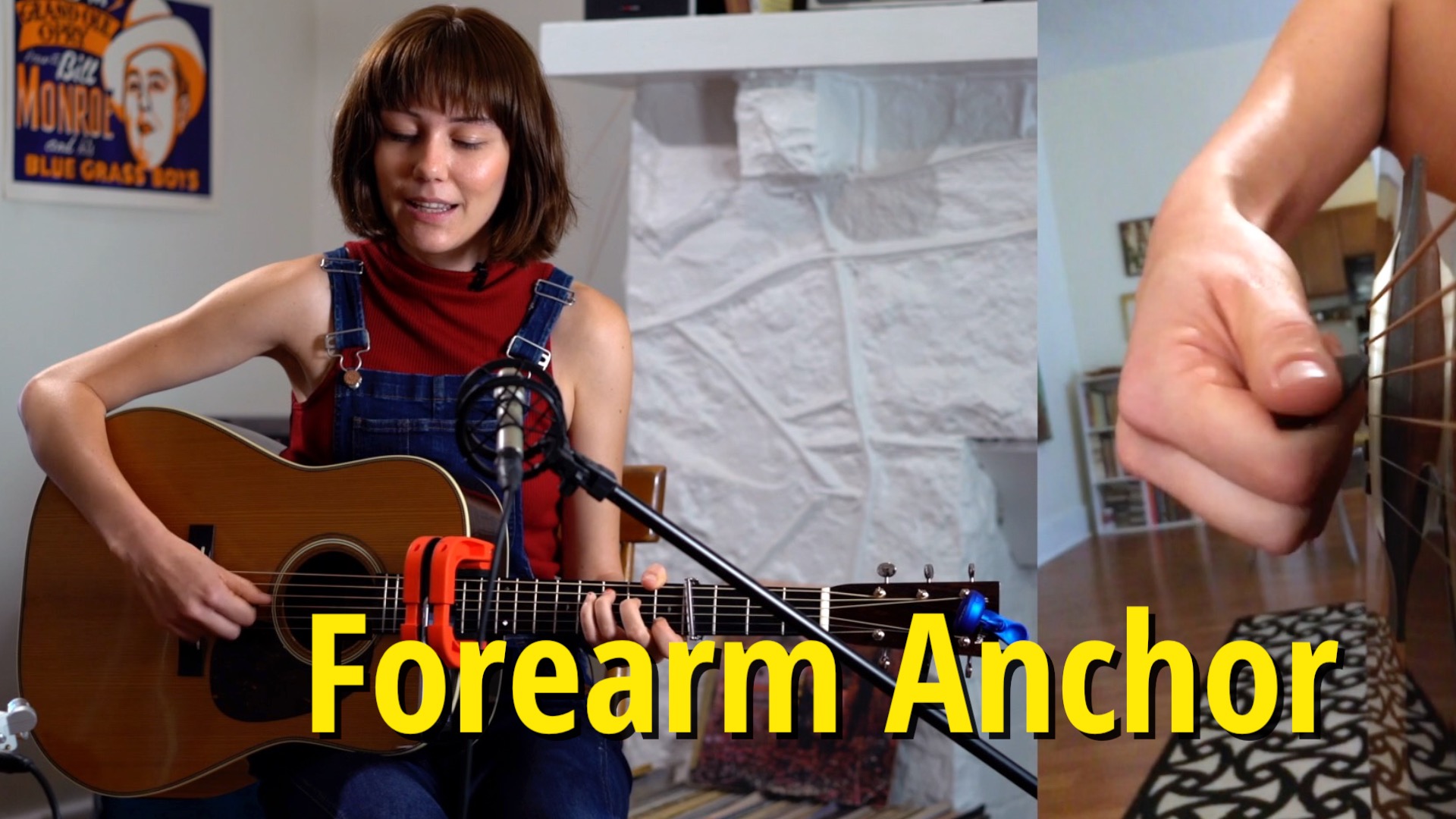 As we can see in the closeup shot, Molly almost always employs a solid forearm anchor against the body. This body anchor acts as a pivot point for the forearm movement, allowing her to quickly cover large distances from bass to treble strings.

Perhaps less obvious is how this anchor promotes accuracy. Even though the body anchor is located relatively far away from the strings she is playing, it still provides a strong kinesthetic sense of where each string is located in space. This is because the forearm length acts like a multiplier, so that only fine muscle activation at the elbow joint is necessary to move the comparatively larger distance across the strings.

Great bluegrass players we have interviewed, like Molly and also the amazing David Grier, develop the ability to finely tune those elbow movements to target any string they want. Over the three-plus minutes of Freightliner’s bustling tempo, we can see just how controllable this seemingly untethered approach really is. In the vast majority of Molly’s bass and chord exchanges, the bass downstrokes land squarely on their intended targets.

For high-speed single note lines, Molly switches to an anchored wrist mechanic. In the closeup shot, you’ll spot it right away: 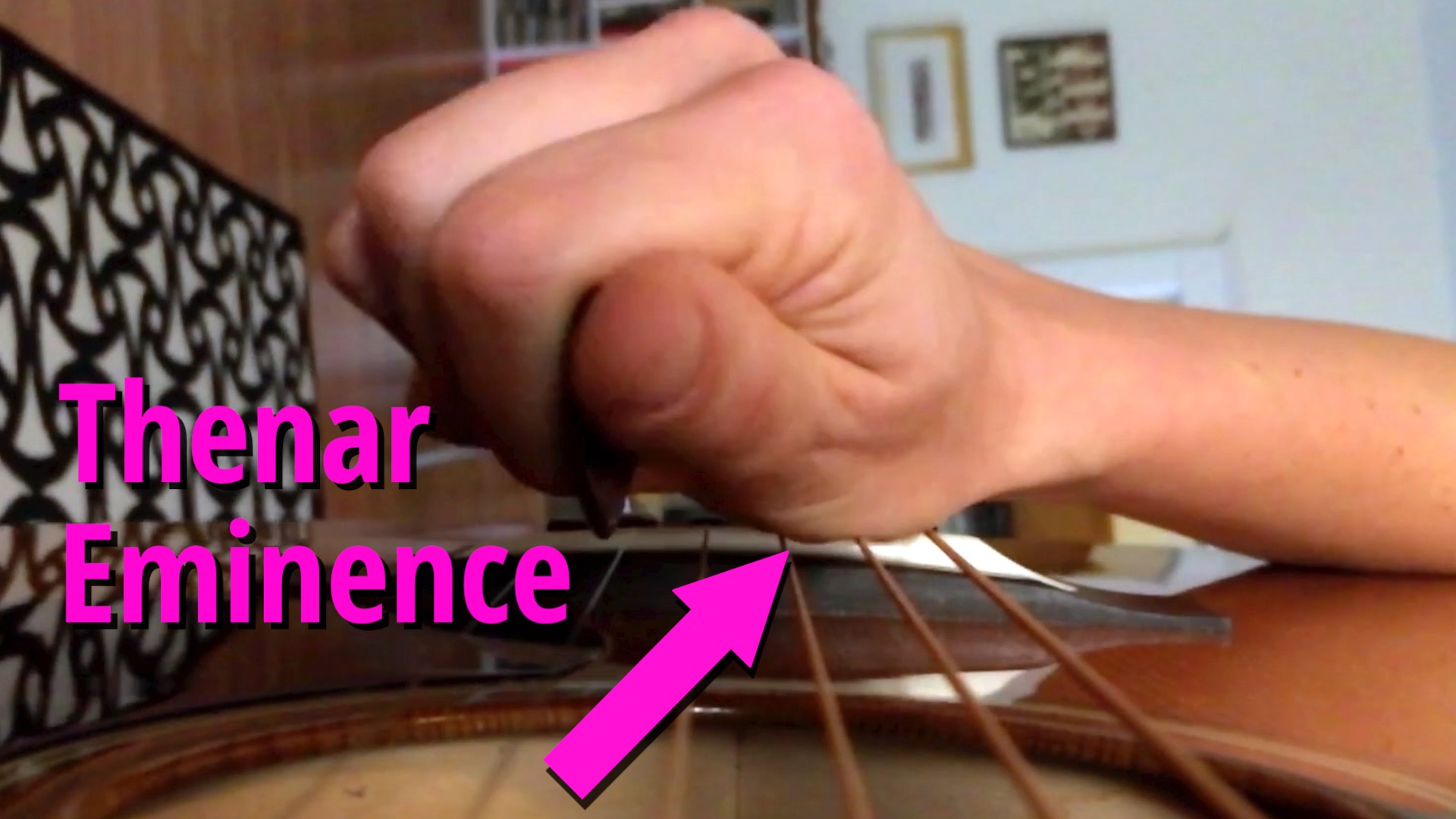 Now this is really interesting. Molly rests the hand directly on the strings, using the meaty pad where the thumb attaches to the palm as the contact point. In anatomical terms, this is the “thenar eminence”, or more simply the “thumb heel”. The muscles located in this part of the palm are responsible for our famously opposable thumbs. They are also responsible for our ability to grip a guitar pick. And that’s a great start!

But there’s an even more critical reason Molly chooses this anchor point for fast alternate picking. Although it might not be obvious while watching Molly play from typical audience perspective, in wrist anchor mode, Molly’s forearm is actually “pronated”, or rotated inward, toward the guitar’s body: 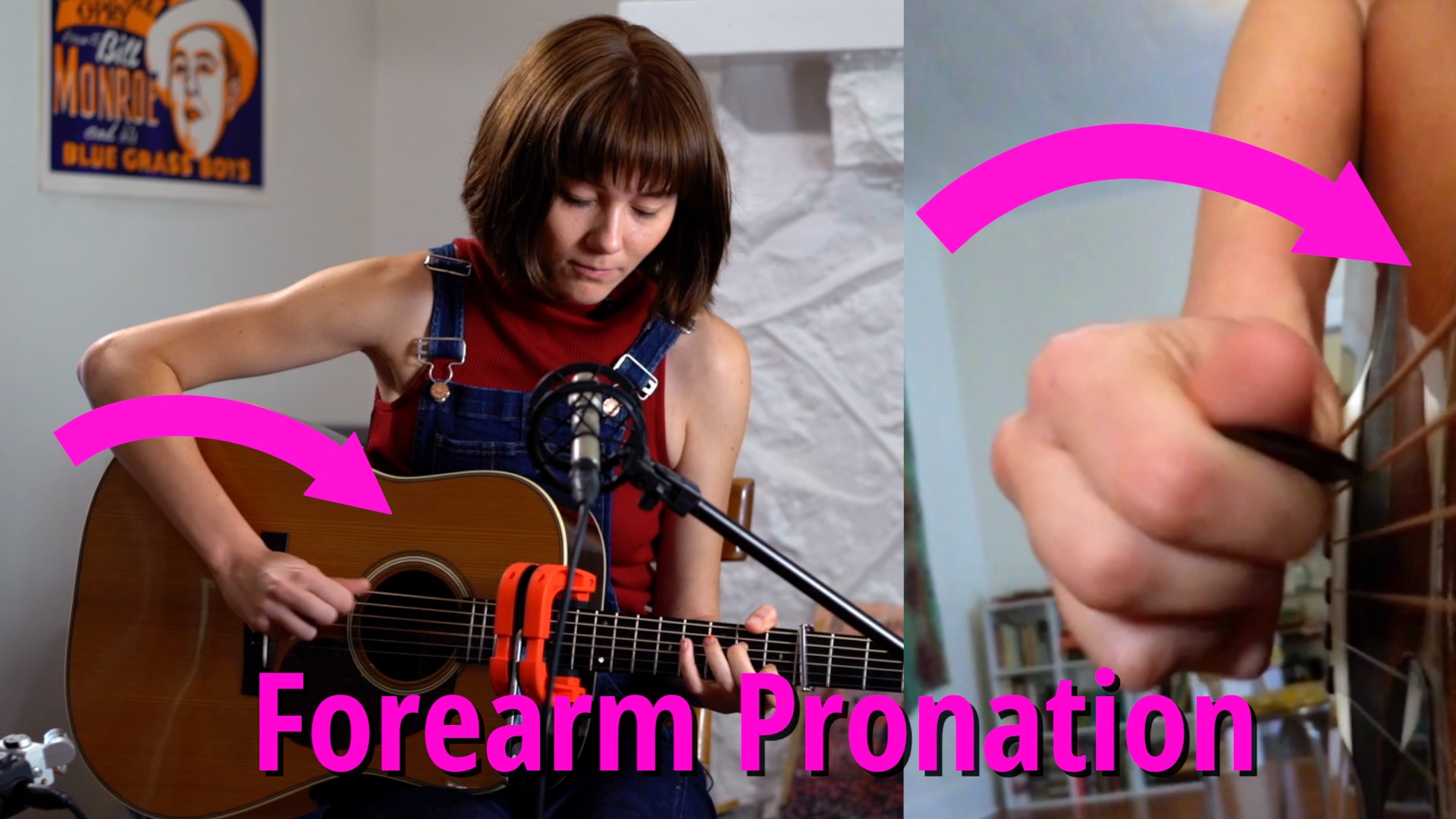 This rotated forearm orientation is what brings her thumb heel in contact with the strings. But this tilted orientation of the arm also completely changes the way Molly’s wrist operates: 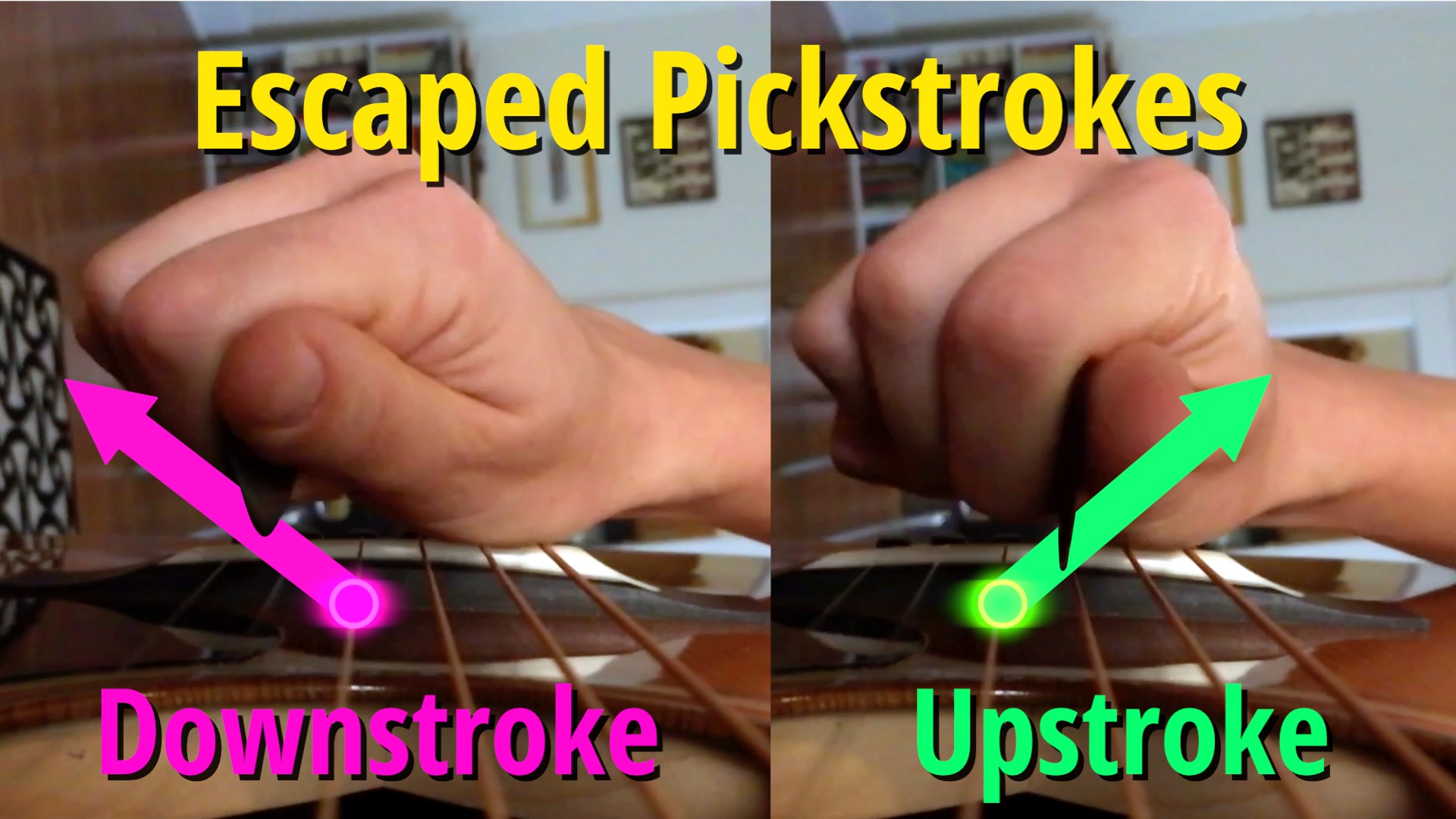 See that air gap between the knuckles and the strings? That triangular slice of space is what the forearm rotation is doing to the hand. Because of this tilt, Molly’s downstrokes now take off at an angle to the guitar, launching right up into the air along the path of the magenta arrow in the snapshot. Conversely, Molly’s upstrokes also launch upward, in the opposite direction, along the green arrow.

You can see Molly make these angled picking movements clearly in the slow-motion sequences in the clip. If you’re not used to filming bluegrass players in slow motion, movements like this might seem unorthodox. But “escaped pickstrokes”, as we call them in Cracking the Code analysis, turn out to be critical to bluegrass guitar. If you don’t make escaped pickstrokes, you’ll hit the surrounding strings, especially during complicated string switching techniques like roll playing. It is Molly’s use of escaped pickstrokes that is the secret sauce of her amazing crosspicking fluency. And it all derives from her pronated arm and thumb heel anchor. Amazing.

In the interview we discuss the origin of these interlocking mechanics, and amazingly, they were mostly intuitive. In other words, Molly figured all this out through a kind of elite-level trial and error. This type of mechanical intuition is rare. Relatively few players will make these kinds of discoveries without very specific guidance, let alone finely hone them into precision musical tools like Molly’s.

That Molly was able to learn these motions mostly on her own is amazing enough. That she is able to switch between them so effortlessly, even while singing, is another. That she can do all this while making music we actually enjoy listening to — well, that’s the greatest skill of all.