If you’re finding this post via search (or heroic blog-dive) please note that the Code Archives are a legacy product, no longer available in the form described below. They were, however, an important predecessor to our Masters in Mechanics interviews — of which you can find many on the Interviews page, with more coming soon!

—The Cracking the Code Team

The Cracking the Code project is the most comprehensive investigation of picking technique ever undertaken. And now, we’re making the raw materials of that investigation available for you to watch, study, and enjoy. Today we’re officially launching the Code Archive, the most unique collection of high-speed analytical guitar footage ever assembled, and a rare opportunity to study world-class technique up close and in action.

The Search for Answers 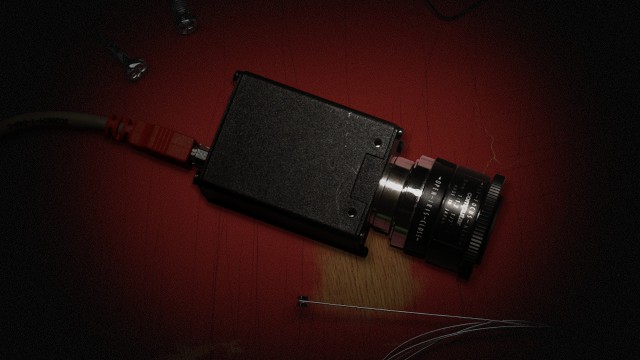 PIXEL PUSHER: The original ShredCam, based on the Basler high-speed industrial camera.

The journey of Cracking the Code began with a simple question about the source of superhuman accuracy in playing technique. Half a lifetime later, it reached its apotheosis in the form of a series of high-speed camera interviews with some of the world’s most plectrally-talented guitarists. But as the hard drives swelled with pixels, it became clear that that the story of the Code could never contain them all: there was simply far too much data.

If you’ve been watching Season 1, you know that the Cracking the Code series proceeds by examining specific clues culled from years of investigation. And compared to the analog VHS video that we’ve seen so far, the interviews were simply a far better way — a rare, privileged, and utterly fantastic way — to gather those clues. But if those clues are necessarily tiny, then the interviews are like giant warehouses full of them. And we could never weave all that material into the story itself.

Which means there’s only one thing to do.

The Code Archive represents the nearly complete content of the Cracking the Code interview series. Presented in the bite-size format captured by the original ShredCam high-speed camera rig, but surrounded by contextual commentary from the discussion, these are nuggets of musical inspiration equally suited to both technical practice and vocabulary expansion.

The Archive is organized by player, in packs of upwards of 40 clips apiece. Each clip is supplied in wide and closeup angles, and right hand footage is supplied in three speeds — from real-time to 4x slow-motion. Tablature in both Guitar Pro and PDF formats, with full picking notation, rounds out the package.

You can browse a selection of clips from each player for free online. For more intensive study, you can download their archive for five bucks — or any higher number that you choose, as per our usual “pay what you want” arrangement. This footage was created to be seen, and we’re pricing it accordingly. And we split download revenue with the players, so you can support both the project and the intrepid performers who bravely submitted to our poking and prodding.

Rusty Cooley’s hyperdrive mode charges the room with kinetic and sonic energy. It’s nearly impossible to reverse engineer at his usual playing speeds — and his medium-speed playing employs an entirely different, unfailingly accurate rotational mechanic, nearly making him two guitarists in one. Rusty’s hybrid approach to accurate picking is a fascinating study in the deeply intuitive nature of our most sophisticated physical skills.

Rusty was also the first Code interviewee, when the nascent idea of strapping a camera rig to a guitar body was still half chimera and half Evel Kneivel stunt. He had both the blazing chops to perform with the ungainly hardware, and the appropriately chill bedside manner to endure the withering ordeal of constant software crashes and retakes. 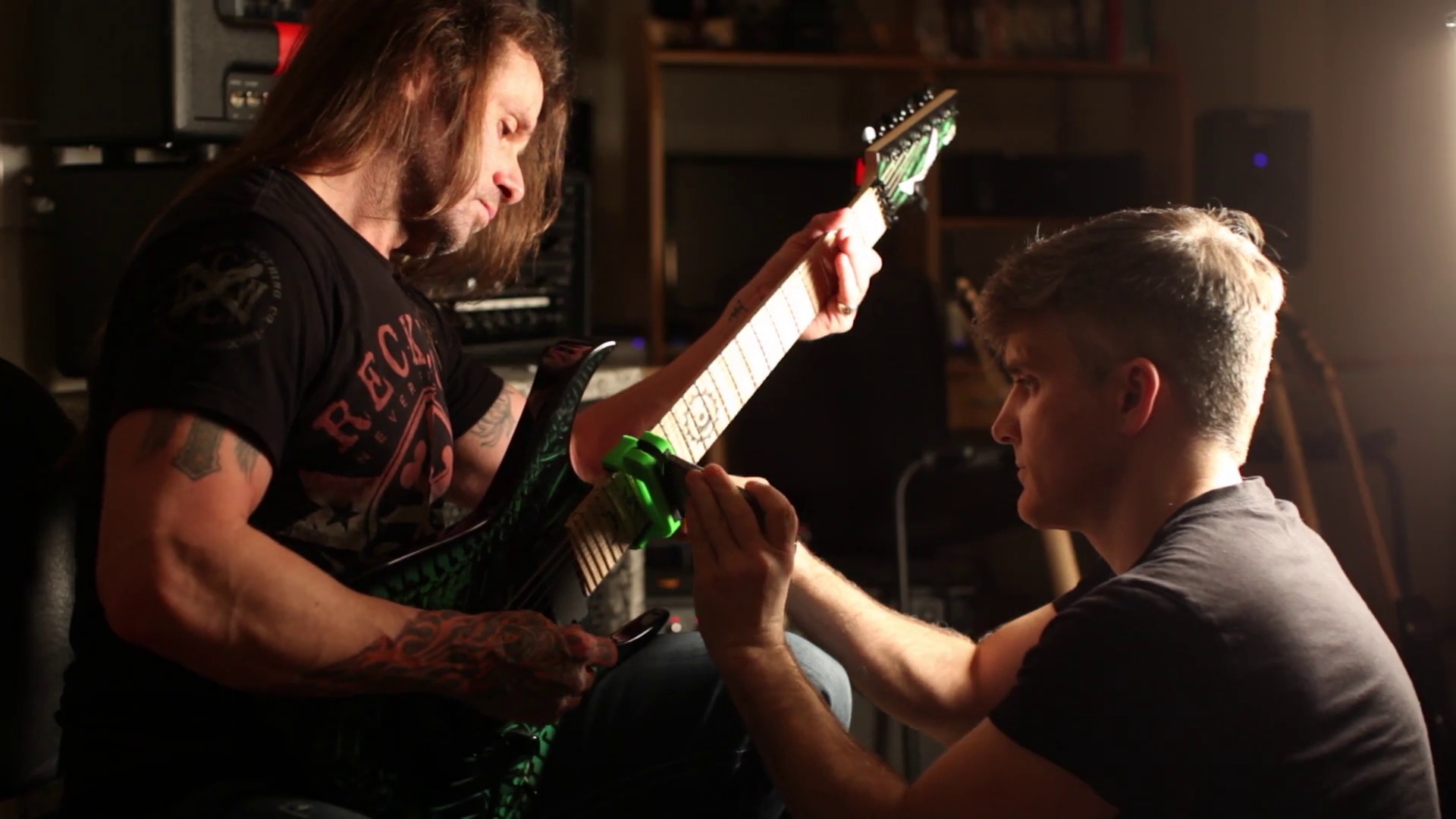 THE GREEN MACHINE: Prototype smartphone camera mount for high-speed guitar analysis. For more on this, stay tuned to our mailing list.

So when we designed our prototype smartphone mount for 2014, we knew who to call. It’s been ten years since the first interview, and the phone in your pocket is now equipped to record at even higher speeds, and with even greater detail, than the original ShredCam. That camera, the Basler a602fc, cost almost $3000 and required a firewire connection to a computer running custom software. The iPhone 5S just requires that you turn off Flappy Bird.

Rusty’s field test of the new mount produced amazingly steady, detailed, colorful footage at 120fps. But it was a musical success as well. His Code Archive is now updated for 2014 with a battery of his fearsome and inventive ideas — 55 in all — ranging from novel pentatonic sweeping concepts, to whole-tone scales and patterns, to killer diminished riffs.

Head to Rusty’s site for lessons with the man himself, and stay tuned to our mailing list as the smartphone mount moves from prototype to product.

A true legend of virtuoso guitar, Michael Angelo Batio‘s impossible chops and alternate picking innovations are a gift to players everywhere. From his pioneering Star Licks instructional video, to his blazing follow-up Speed Kills, Mike’s remarkable right hand steals the show. Quite simply, Mike is the owner of one of the most mechanically efficient alternate picking techniques on the planet.

Mike’s flawless technique and minimalist, linear melodic aesthetic are the Eames chair and Noguchi table of shred: sources of wonder, as much for their spare sonic beauty as their elegant construction. Some of the most telling moments in the interview occur when Mike switches from exposition to playing — snapping into position so instantly, even if he’s leaning over in the chair or adjusting a pedal, that it’s clear that everything about his playing form is simply solved.

At one point in the interview, Mike comments on the awkwardness of the camera rig that has hijacked his fretboard. This is understandable. In previous testing, the unbalanced weight of the camera, the bulk of the mounting clamp against the chest, and the obstructed line-of-sight to the picking hand, made the whole experience totally unsettling.

But you wouldn’t know it from his performance. In the ascending fours clip, which Mike starts on an upstroke, the one-note-per-string components of the lick become symmetrical inside picking, enhancing the difficulty of this already infamous sequence. As he ascends the neck, he weaves the line around the camera body to the highest string, and then sneaks underneath the bottom edge of the camera to hit the high “A” tonic. But not underneath my jaw — which was on the floor.

Watching Mike Stern play, it’s clear he has no preconceived notion of difficulty. He infuses his beautifully executed trademark hybrid of bop and rock with an array of unorthodox and daunting ideas that step well outside the neighborhood of familiar guitaristic patterns. Mike’s gracefully clean picking across arbitrary fingerings is the result of years of painstaking transcription from other instruments — and yet his command of the unorthodox mechanics involved is completely natural.

Mike’s fearless tackling of even the most daunting pick sequences is on ample display in his fascinating 44-clip Archive. Some of these are so twisting and tortuous as to qualify as picking exercises were it not for their harmonic inventiveness, and the deft sense of time and dynamics with which Mike plays them. One particularly mobius-like pattern, nicknamed during transcription simply The Angular Thing, assumes an unexpectedly motive and funky vernacular when backed by Mike’s pulsing string-scratching groove in the “in context” version of the lick.

Mike could have been a pianist, or a horn player, such is his seeming irreverence toward the challenges in translating his musical visions to the mechanical language of picks and frets. Brimming from start to finish with innovating and cool ideas, his Archive is a journey of such exploration that takes us far beyond many of the guitar’s weary cliches — and far beyond the original premise of the interview. 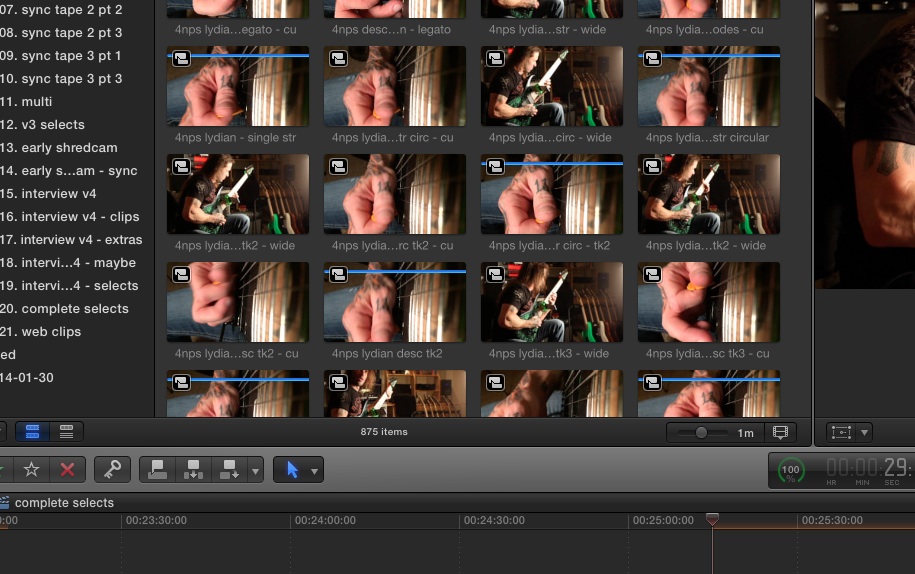 Assembling these packs was an unexpected exercise in exhaustion. Synchronizing and editing hundreds of clips across hundreds of gigabytes of footage in disparate formats is all very tempting to the gods of carpal tunnel. And woe betide he who needs to ripple color correction, eq, or even simple naming conventions through hundreds of clips times four camera angles!

But when the subject matter is this wonderful, it’s also hard not to fall in love a little. The crystalline clarity of a Batio scale passage, the ferocious power of Rusty’s hyperdrive, Mike Stern’s fearless harmonic excursions — all these have the power to make you get up and practice. This happened many times during the editing process.

We’ll be adding more players to the Archive as time allows, and the caloric density will be uniformly high across the board. In terms of the sheer density of informational and inspirational value, there is quite simply nothing else like it.