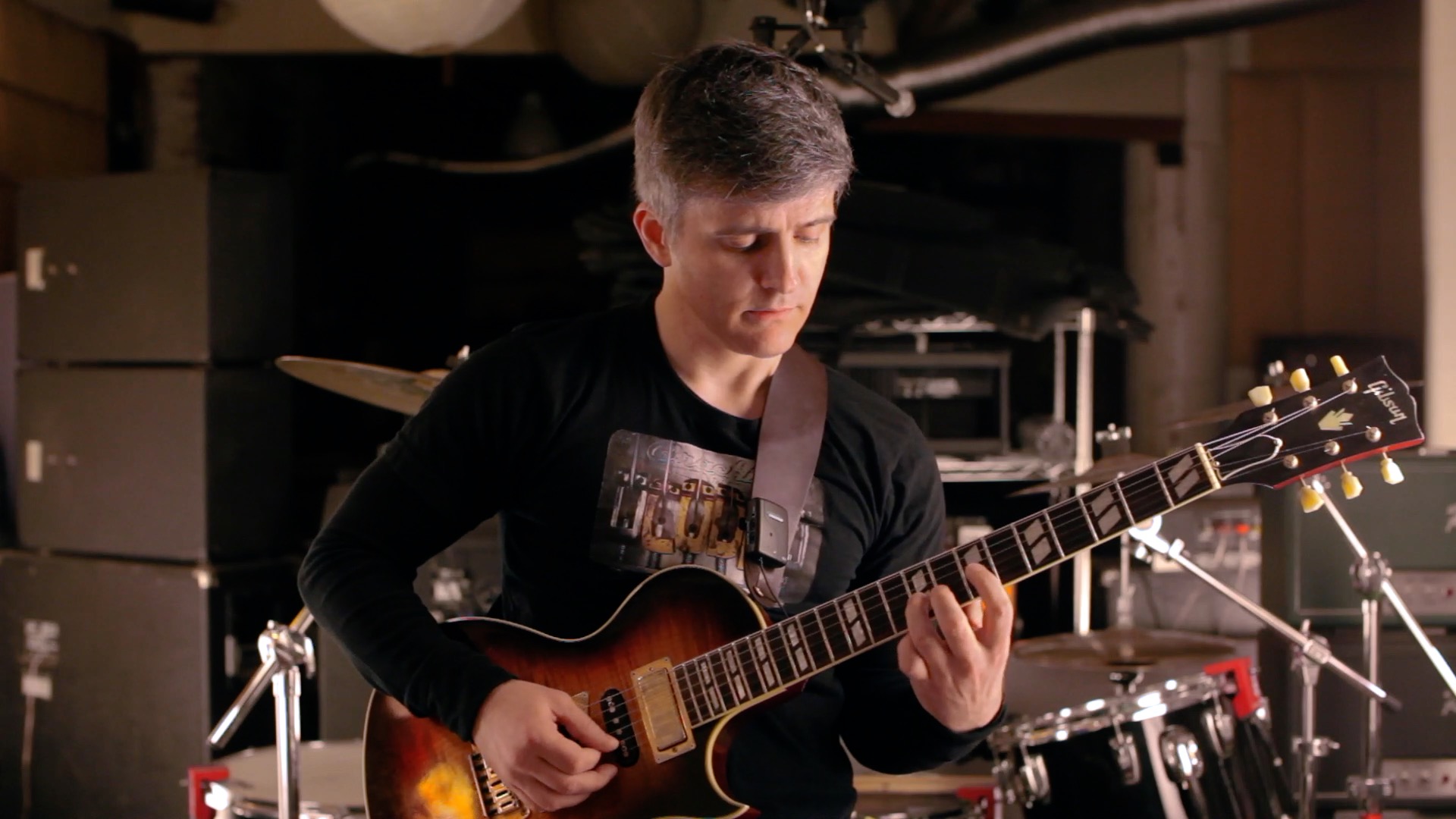 Traversing the lower half of the fretboard requires moving through some relatively less common pentatonic shapes, and for Eric this represents a trove of melodic opportunity:

This is a really fantastic example of drawing musical creativity from mechanical diversity. Position three of the pentatonic scale is a study in divergent ergonomics: convenient adjacent fingerings on the lowest three strings, awkward offset fingerings on the third and second strings, and a comfortable whole-step interval on the top string.

And from this unusual fretboard arrangement, a staple motif in Eric’s lead playing arises:

This is a recurrent motif in Eric’s playing, and it stands out among the pentatonic colors of Eric’s lead playing not only for its identifiable melody, but also its rare use of chromaticism. This three-note chromatic blues sequence, found here on the top string, is yet another unique feature of the third pentatonic position. And adding a fourth pickup note lets Eric create a highly efficient alternate-picked turnaround on the top string that switches strings after an upstroke. This is essentially the same melodic intent, and the same picking pattern, and the fifth-position pickup we’ve already seen, but with a fretboard layout that is friendlier to smaller hands.

This blues turnaround leads to a sweep sequence between the third and second string — the same staple device we see throughout Eric’s lead playing — and serves to reverse the direction of the melody yet again. The distinctive final two notes of the phrase are the melodic climax, essentially outlining a V-I sequence in natural minor, like a mini Beethoven’s Fifth. They are played slightly slower and more emphatically than the rest of the phrase, in maestoso fashion. And befitting this extra emphasis, they are almost always executed by bounce, with repeated downstrokes.

Given their important role as anchor point of the melody, these two final notes recur in all the lick’s variations:

In this version, Eric use a stair-stepping pattern to descend the natural minor scale. This is a common melodic sequence in rock playing, and one of the few examples of switching strings after downstrokes in Eric’s lead vocabulary. As such, it is not typically played as quickly as the more efficiently organized pentatonic cascade phrases, and is instead mined for emphasis much like the two melodic anchor notes.
The most emphatic of all the phrase’s variations strips away all extra adornment:

In this skeletal version of the third position motif, only the key melody notes are present, with no stair-stepping, chromaticism, or other flash. Accordingly, the entire phrase is now executed by bounce. And this offers a window into the link between the mechanical and the creative in Eric’s mind. While the bounce technique is a solution to otherwise awkward string changes, it is also inseparable from its role as a type of musical exclamation point for melodically important ideas — either parts of phrases, or entire phrases.

The second half of the 3-1 cascade is really a entirely new melodic statement that takes over where the third position motif leaves off. It begins with yet another example of a clever top-string turnaround:

In this five-note turnaround sequence, a half-step descending slide plays the role usually assigned to a pulloff in Yngwie’s technique: it’s the unpicked note that forces the upstroke. Thus, the phrase contains five notes, but only four picked notes, and efficiently finishes on an upstroke. It’s the ideal combination of mechanically necessary and melodically interesting. The ascending whole step figure is counterbalanced by the descending half-step figure in almost contrapuntal fashion. But it’s only when we arrive at the next string of the sequence that we fully appreciate the cleverness of this sequence:

The extra time afforded by the upstroke-slide string change on the top string lets us do something that is normally off-limits within a purely alternate picked, downward pickslanting phrase: start a new string on an upstroke. And this, in turn, lets us play an odd number of notes on the new string, and still finish on an upstroke for string changing purposes. In this instance, Eric plays just one note — a single upstroke — and then immediately moves to the next lower string on a downstroke.

In fact, this entire sequence of three strings is precisely the same one we saw in Yngwie’s three-string arpeggio mechanic, in which both the first and second strings of the pattern start on upstrokes, with a pull-off in between, and the third string is the downstroke. And just like Yngwie’s solution, Eric uses that third-string downstroke to return to the second string by simply continuing it as a sweep:

The fact that Yngwie and Eric’s solutions here are so similar isn’t just a coincidence. The upstroke-legato-upstroke string change is a fundamental building block of downward pickslanting-based lead playing that lets downward pickslanters execute odd-numbered descending lines with extreme efficiency. It is widespread in jazz, especially in bop, where one-note-per-string intervallic sequences in both directions are common. Tal Farlow in particular used slide- and pull-off powered upstroke string changes to stunning effect, building a portfolio of virtuosic turnarounds and arpeggiated signature phrases that sound as space-age now as they did sixty years ago.