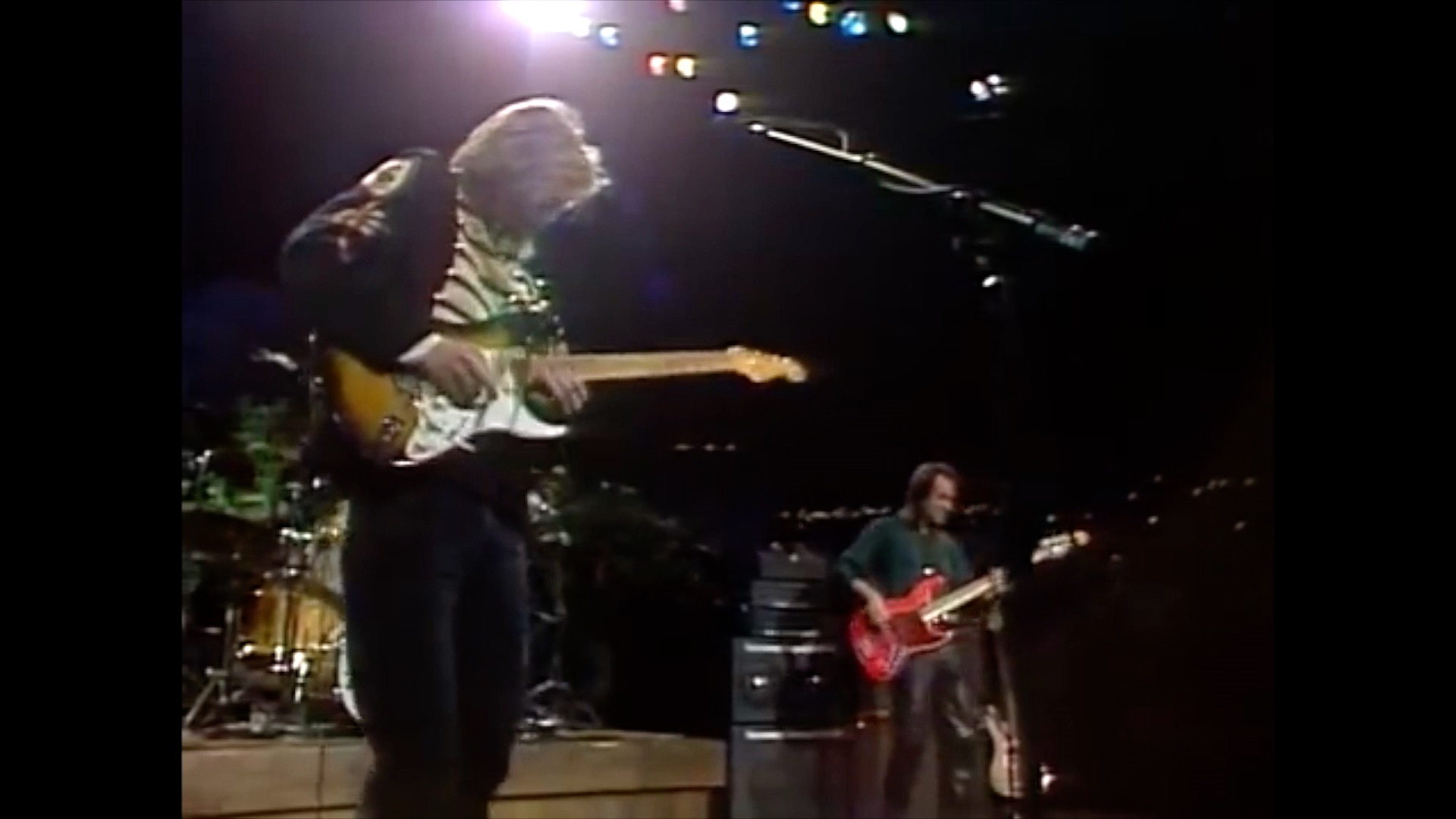 The descending cascade is so prevalent in Eric’s style that it becomes a kind of sonic backdrop against which his other stylistic elements stand out. And on the comparatively rare occasion that he turns around to come back up the fretboard, the results are nothing short of glorious:

This glittering rocket ship of ascending virtuosity is an immediately recognizable Eric Johnson trademark, and a concentrated distillation of his mastery in painting ethereal soundscapes. A key ingredient of its sonic effect is its harmonic color — or, more appropriately, its lack of it.

The lick broadly traces the outline of a minor seventh arpeggio, a chord type that has the unique property of being a subset of the minor pentatonic scale. In fact, flipping that around, one way to look at the minor pentatonic scale is that it essentially is a minor seventh arpeggio, with an extra note — the fourth degree of the scale — thrown in to produce the full five-note sequence. Simply eliminating this fourth scale degree creates the minor seventh sound, and reduces the number of notes in the scale from five to four.

This two-string sweep can also be handled by bounce, with two separate downstrokes. The slight pause between the first and second downstroke introduces a little rubato at the beginning of the phrase. The initial note is also almost always a slide, from lower down on the 6th string. So these two elements — the slide and the rubato — work together to enhance the drama of the phrase’s beginning. This is exactly how Eric handles the first two strings of the ascending pentatonic pickups we’ve already seen, and it’s notable that these are also ascending phrases.

The 5th and 4th strings of the pattern are each two notes per string, and terminate on an upstroke. Because this sequence terminates on an upstroke, this means that the transition to the 3rd string is done via alternate picking.

Once again, skipping the fourth degree of the scale requires moving immediately to the next string. If we start on a downstroke, and follow the dwps rules, we’ll need a sweep to get there, and this is precisely what Eric does. By now the lick has reached its full speed, so bouncing is no longer present — this time, it’s a bona fide sweep. Once the downstroke arrives on the second string, it initiates another two-note down-up sequence.

At this point, after traveling five strings of pentatonic position II, the lick takes a turn and moves even higher up the fretboard.

This is a straight shift to the third position, with no audible sliding. Instead, the index finger simply steps over to the third string to fret the note the middle finger previously played, and this shifts the entire hand up on position. As we’ve seen, the top two strings of pentatonic position III have special significance in Eric’s style as the location of a number of recurring melodic motifs. And Eric frequently plays them at the top of this arpeggio figure. In this instance, though, we’re not going to do that — we’re going to continue our skyward arpeggiated journey.

This is simply the third and second strings of pentatonic position III, played ascending. But because of the surrounding musical context, we now hear it not just as pentatonic, but also as part of the continuing ascending minor seventh arpeggio. And this again highlights the sonic overlap of these two sets of notes. To see only the tablature for this portion of the lick would only tell part of the story, and the phrase might appear to be purely pentatonic. Its arpeggiated character becomes explicit once again as we move to the top string.

We skipped the first note on the top string — the fourth degree — and moved directly to the fifth. This is an important scale tone in both major and minor, as it is essentially the counterpart to the tonic. In other words, it is scale degree five, and more importantly, the V chord that takes its name from it, that leads directly to the resolution of the phrase. And when that resolution arrives, it does so in the most striking possible way.

Now that’s how you end a phrase! The final note of the arpeggio, the root of the minor seventh chord, is a glistening phantom tone activated by way of an impossibly-precise right-hand harmonic. This type of harmonic had become de rigeur in hard rock guitar by this point, most notably through the influence of Eddie Van Halen, whose ability to launch soaring squeals, seemingly at will, turbocharged the popularity of this technique in ’80s rock. But the actual pitch of those dog-whistle tones was a result of the picking hand’s position, and it was not usually tightly controlled by the player. Instead, by simply allowing a portion of the right hand thumb to contact the string during picking, a random harmonic could be generated that acted as a textural or special effect. Because these tones sprang from the harmonic series of the underlying fretted note, there was a good chance they’d at least have some relation to the surrounding chord or key. But they sounded cool even if they didn’t, especially with heavy vibrato and bending.

But here was an example of a specific harmonic tone being chosen, with sniper-like precision, as the melodic destination of a phrase. To do this would require an exact awareness of where on the string the harmonic node point existed. And this would be different for every fretted note, not to mention every harmonic node point for each of those notes. Once you did the geography, you’d then to move the picking hand to exactly that spot, at the exact moment when the final pickstroke crossed the string.

The fact that this was all happening at light speed only made it that much more improbable. The slightest misplacement of the picking hand, and the harmonic wouldn’t sound — you’d hear the dull thud of the pick against the string, or nothing at all. This became harder to do on the upper strings as the string vibration became more delicate, and especially as you got higher up the fretboard. And Eric’s perfectly placed harmonic overtones were so high as to be well off the fretboard in most cases. That meant you’d need even more gain from the amplifier to capture these tiny vibrations. But Eric wasn’t playing over- the-top modern metal amps. He was playing vintage guitars, with low-output pickups, through vintage amps from the seventies, running through a collection of ancient overdrive pedals from the same era.

The sonic effect of all of this was so space-age, that it was hard to acknowledge that it was even happening. In actual practice, it turns out to be not quite as impossible of a mission. Memorizing the location of specific harmonics for specific fretted notes in common guitar keys eliminates most of the pre-planning. And the specific layout of this lick made that easy to do. He always played it in exactly the same pentatonic position, and always activated the harmonic on exactly the same note. All you’d need to do is figure out what landmark on your guitar was closest to the right spot — for example, the edge of a pickup, or maybe a certain distance away from it.

Most players utilize a rolling motion of the right hand to promote thumb-string contact. It’s highly effective, but it can sometimes make it tricky to target specific node points if it’s not clear precisely which part of the thumb will eventually touch the string. Eric solves this with a distinctive thumb bend that he appears to use exclusively for harmonic activation. This is not a pinch. In fact, there is never any actual “pinching” in a right-hand harmonic. It’s a term that does not usefully describe the more common rolling motion, or Eric’s thumb bend technique. Instead, this quick, temporary bend brings the thumb knuckle almost flush with the string, just in time for the pickstroke on the given note. And this gives him a consistent reference point for targeting node points on the string.

Even still, a certain number of these attempts in Eric’s playing are whiffs. Usually, when this happens, some amount of the fundamental fretted note still pokes through, and the phrase still has a proper apex. Which is fine. We can hardly blame a guy who’s consistently sinking three-pointers with Bird-like accuracy for not swishing every single one of them. It’s more like the opposite: it’s cool to see him take the shot, time after time, with no fear. That he did this repeatedly on live TV, in a make-or-break performance that turned out to be career-defining, is truly impressive.

Eric plays a couple variations of the ascending minor seventh arpeggio. Here’s one with several bells and whistles added:

In this variation, he’s added a half-step figure to the bottom of the phrase, which introduces a minor ninth sound. He throws in an additional sweep on the 5th and 4th strings of the pattern. And on the top string, he brings back the fourth degree of the scale. This gives more of a stepwise melodic feel to the apex of the phrase. And it actually simplifies the picking because now the top string has two notes, and terminates on an upstroke — down-up. The transition to the final harmonic is now up-down rather than a repeated downstroke, as it is in the shift version of the arpeggio.
But we can also go the other way, and strip out all the extra features: