In an upstroke escape or USX picking motion, upstrokes break the plane of the strings and escape, while downstrokes remain trapped.

This produces a picking motion which doesn’t actually move side to side at all, but instead traces a diagonal path relative to the strings, where the upstroke portion of that path lies in the escape zone:

To play a multi-string phrase with USX motion, the upstroke must be the last note on every string, so that all the string changes occur during the escapes. When paired with phrases that are arranged this way, the alternate picking motion becomes the string switching motion:

Because of its angled trajectory, upstrokes naturally rise up in the air, allowing you to drop down on a different string and continue picking. As fast as you can pick, you can also move to a new string, without any additional jumping motion and without any loss of speed or efficiency.

From an engineering perspective, this solution to the string-switching problem is pretty ingenious. And it’s remarkably simple, too. The motion still moves back and forth, just on a slight diagonal. When you trace the path this diagonal motion creates, the zig-zag pattern really makes it easy to see how economical this solution is, moving the pick from one string to another without any jarring jumps or disruption in the smoothness of the motion.

Adoption of USX motion is widespread across many different musical styles, by players as diverse as Eric Johnson in rock and blues, Yngwie Malmsteen in metal, and George Benson in jazz. With one notable exception, variation in USX techniques stems mostly from the idiosyncratic mechanical choices of individual players, rather than requirements imposed by specific musical styles.

For example, the upstrokes in metal master Marty Friedman‘s technique follow a pronounced escape angle and are super easy to spot when viewed in slow motion: 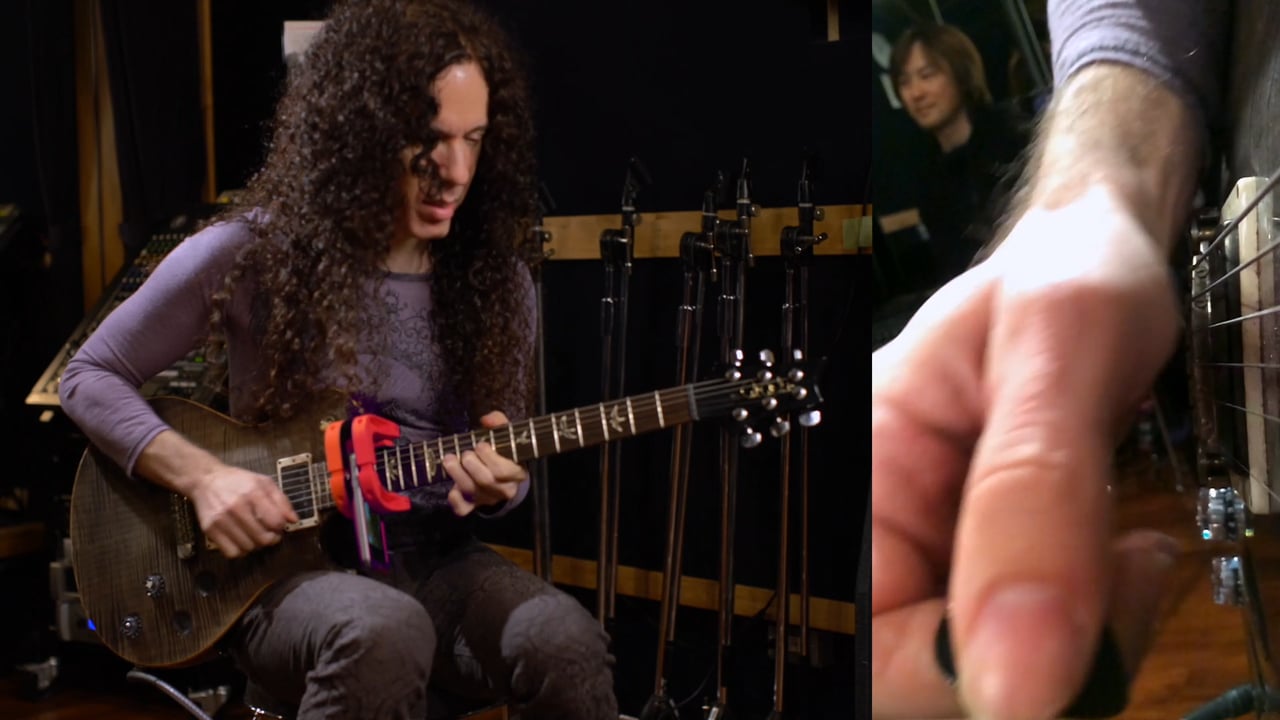 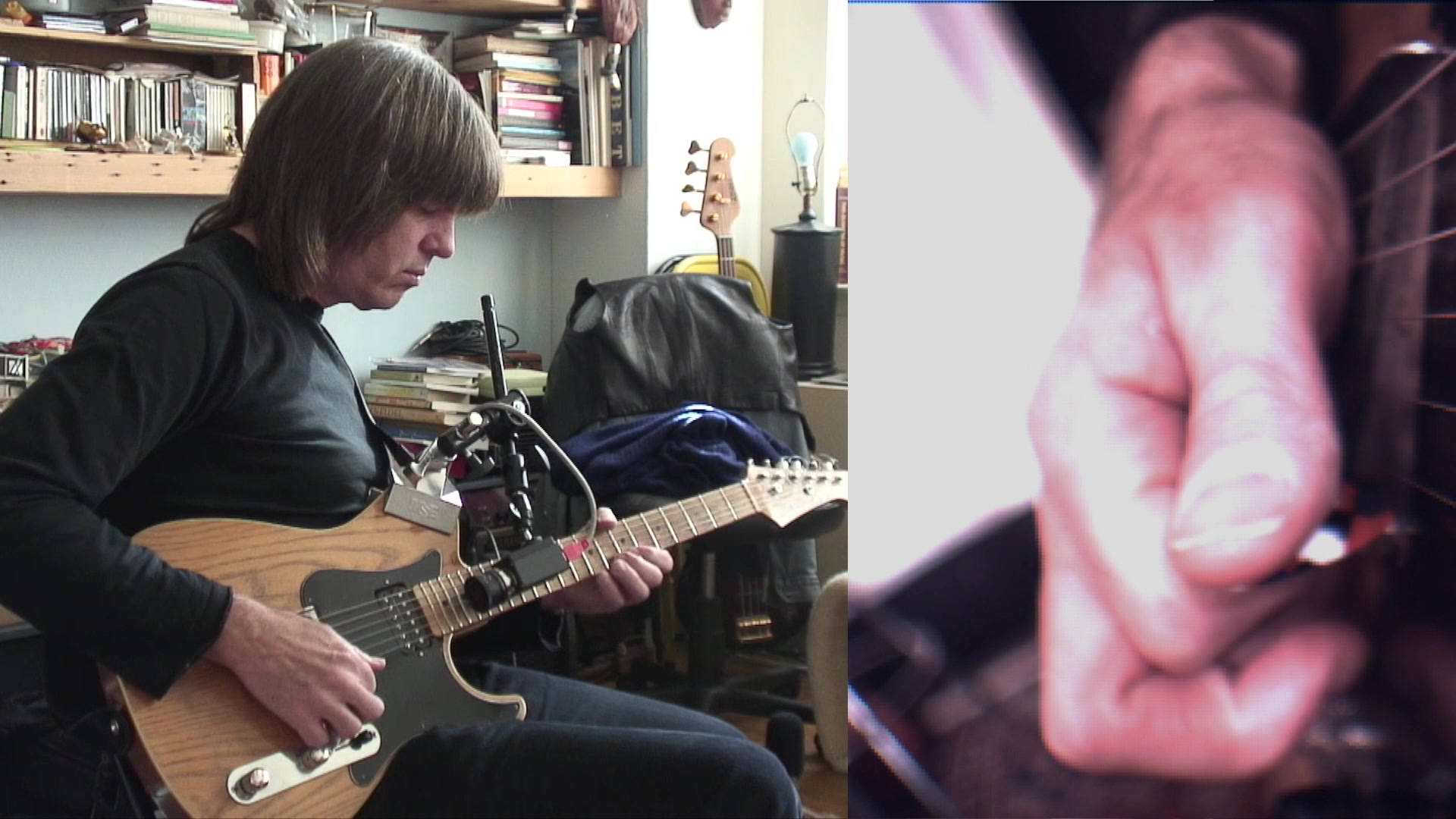 The difference in escape angle between these two USX players flows from the arm position and joints they’re using. Marty uses a supinated forearm orientation, and a unique combination of forearm, wrist, and finger joints to generate the picking motion. As a result, his upstrokes pull out of the strings almost completely vertically, making their escape path very easy to see. But Mike uses a much less supinated arm position, and a wrist deviation motion which moves side to side along a path that is almost parallel with the strings. So Mike’s upstrokes only escape by a few degrees, cutting it very close as he moves from one string to the other.

Note that whether the escape angle looks more vertical or less vertical has nothing to do with the efficiency or speed of the resulting motion. Marty and Mike are both moving the pick back and forth along an approximately straight line path. The reason one looks more vertical than the other has to do with how their arms and hands are oriented compared to the guitar they’re holding. If there is any difference in the efficiency of the picking motions of these two players, it would flow from the joint motions each player is using, and not from the escape angle we see under the camera.

Guitarists in most musical styles have historically been self-taught, at least as far as picking mechanics are concerned. As a result, players within any one style often exhibit a wide range of different mechanical approaches. But the Gypsy jazz style of Django Reinhardt is unique in standardizing on specific mechanics which are systematically taught to new players: USX motion.

In this slow motion example from our interview with Gypsy master Joscho Stephan, the diagonal trajectory of his USX pickstroke is easily visible: 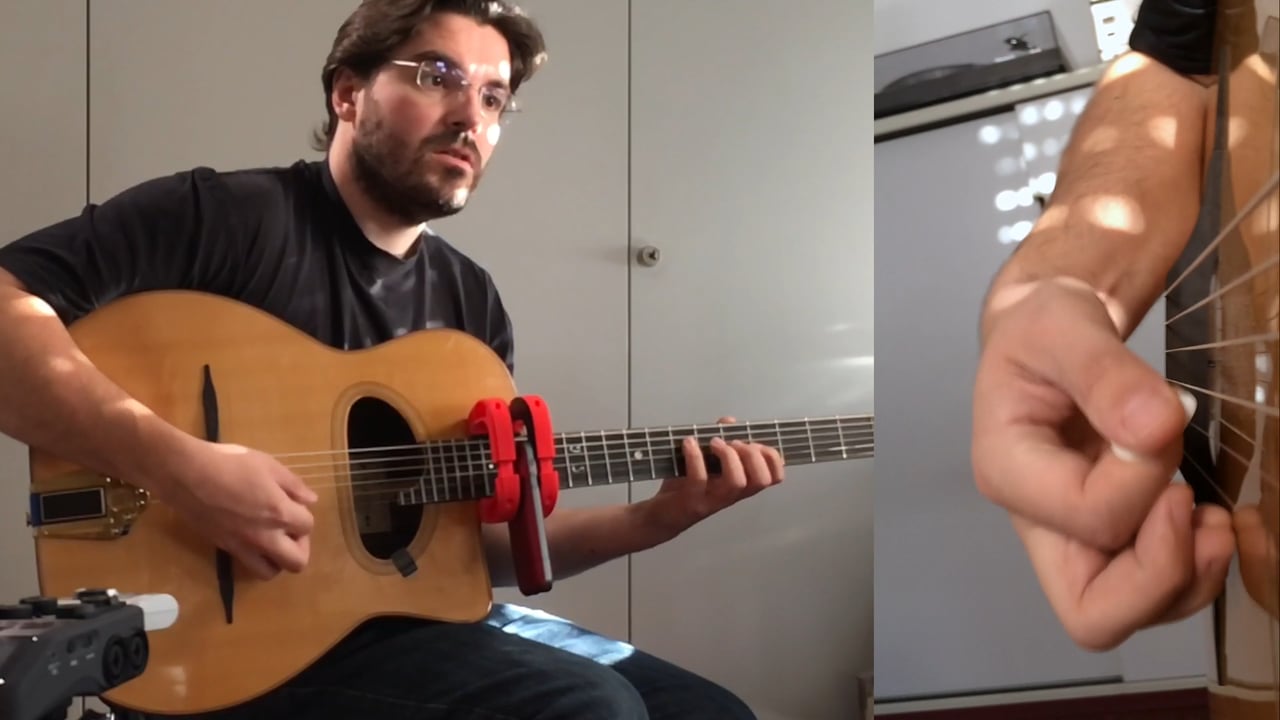 The pronounced escape angle of Joscho’s USX motion is similar to what we saw in Marty’s technique, which comes as no surprise, considering they both use a supinated form with a flexed wrist. Viewed together, the similarities are striking:

From our interview with Marty, we know that he was not trained as a Gypsy guitarist and only learned later in life, from watching video of himself as a teenager, that he was already using this form at an early age. The fact that he was not generally conscious of having chosen this approach may seem counterintuitive given how often fans have commented on its seemingly unorthodox appearance. But this is actually a common response among players we’ve interviewed. It is also one of the many examples of parallel evolution in guitar technique, in which different players hit upon similar mechanical approaches through trial and error, often while not being conscious of doing so.

As a result, Marty’s vocabulary includes many phrases with picking structure and fretboard layout similar to lines played by Gypsy guitarists like Django and Joscho, and his mechanics are subject to broadly similar requirements. When they’re not using downstroke sweeping, rock players like Marty and Gypsy guitarists like Joscho both achieve their fastest picking speeds by using pure alternate picking and ensuring that the last pickstroke on every string is an upstroke, to capitalize on the escape.