In a trapped picking motion, upstrokes and downstrokes remain below the plane of the strings.

Since the pickstroke starts and ends in the trapped zone, this means that the point of the pick never rises above the plane of the strings. So if you continue a trapped pickstroke far enough past the string you’re playing, you’ll eventually come into contact with one of the surrounding strings. Here’s nylon-string maestro Jorge Strunz doing exactly that: 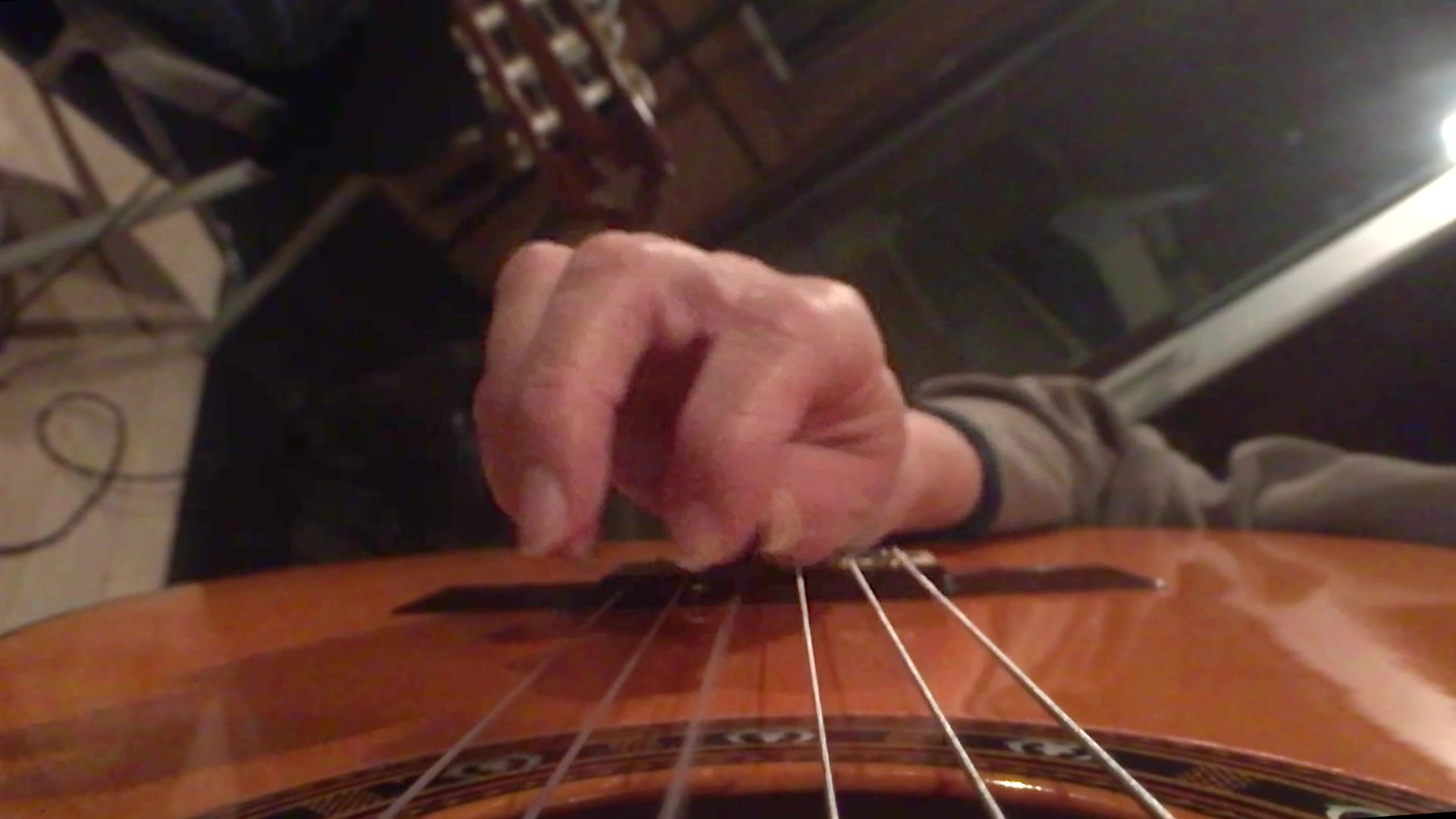 Of all the great players we’ve interviewed, Jorge is the only one who uses a trapped motion as his primary picking motion. As you can see in this slow motion example, Jorge actually rest strokes on upstrokes and downstrokes, hitting the strings on either side of the one he’s playing. This makes it very clear that his motion really is trapped in both directions.

With seemingly no way out, this type of trapped picking motion should create a problem during string changes. And yet, Jorge is famous for his long scalar sequences that float effortlessly across the strings: 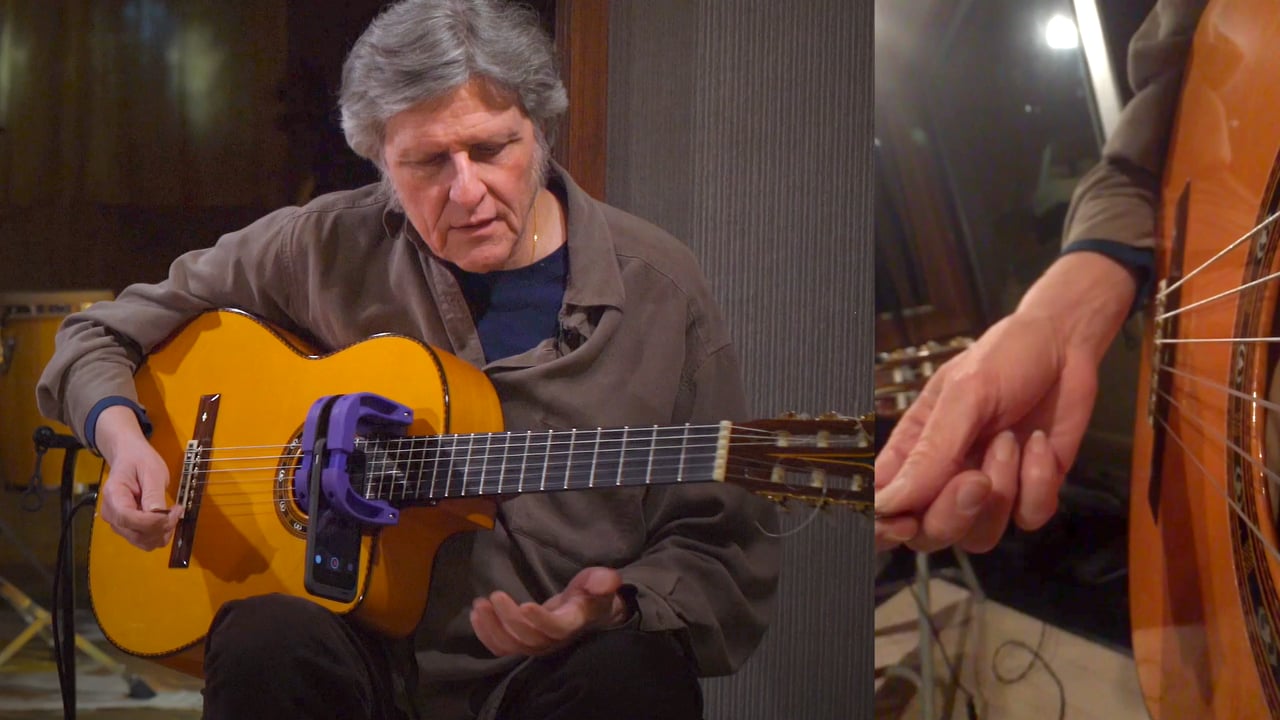 And this is pretty strange. How is Jorge getting across the strings without hitting anything?

It turns out, he isn’t. Using a trapped motion while picking across the strings means that you’ll hit one of the surrounding unplayed strings, since the pick isn’t trying to get over them. We call this type of string contact swiping, and it’s a thing that great players like Jorge actually do. Instead of lifting the pick over the strings that are in the way, Jorge simply swipes, or plays right through them: 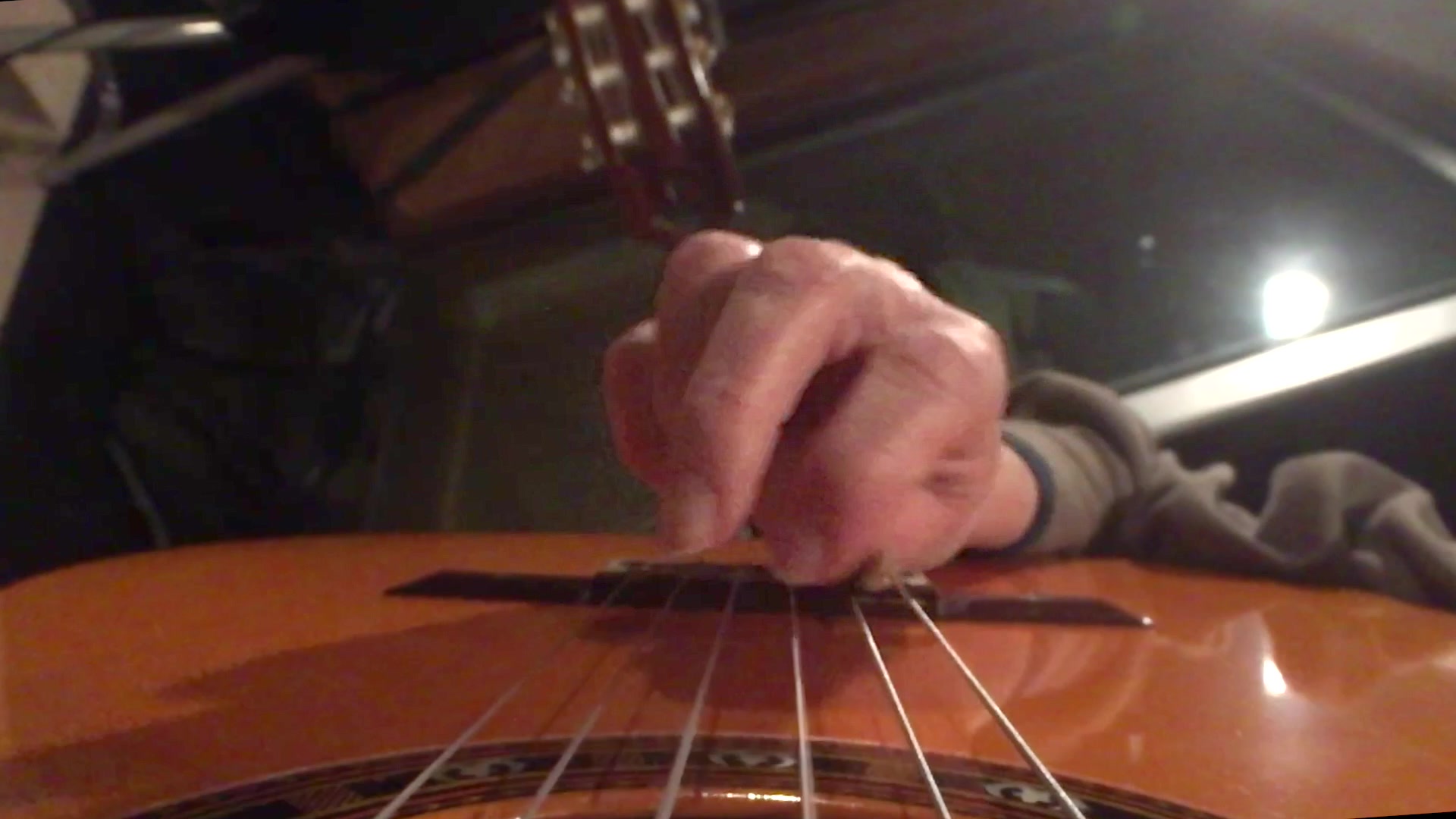 In this example, at every string change, you’ll see the pick hit two strings in rapid succession. The first one is the string Jorge just finished picking, except it’s muted so it doesn’t make any sound. That’s the swipe. Right after that, the pick keeps going in the same direction and plays the new string. That’s the pitch we actually hear. And again, the reason Jorge does this is that he needs to be on the other side of the current string to reach the new one with alternate picking, but he has no way of getting over it. So he just pushes through it.

To make this work, Jorge uses a high degree of edge picking to help the pick slide over the swipe string, and fretting-hand muting to deaden the pitch that would occur from playing it. If you listen closely, you can still hear some muted noise in Jorge’s lines, along with the occasional un-muted open string. But considering that he’s swiping almost every string change, Jorge’s use of the technique is almost magically quiet at times.

Jorge is unique among players we’ve filmed in that he has made trapped motion and swiping a core part of his technique in both directions, by allowing the pick to move straight through a string that’s in the way.

In slow motion, we can see that he isn’t making a motion to get over the string. Instead, what we see are trapped pickstrokes which look the same during string changes as they do while playing notes on a single string. So Jorge’s use of swiping is systematic swiping because he’s actually relying on it to make the string changes work.

By contrast, everyone hits some unintended strings once in a while. After all, they are pretty close together. When it’s a great player that does it, the line usually still sounds fine, and the motions usually still look correct when you film them.

Dropping into slow motion, we can see some swiping on the descending side around the G and D strings:

But the pickstrokes at that moment are actually still double escape pickstrokes, and they still clear the strings in both directions. This is not systematic swiping because these are genuine escape strokes, just a little off-center, causing untintentional contact. That’s what makes this accidental swiping.

Not all mistakes are created equal. A player who is still learning escape motion and slams head-first into a string with a trapped pickstroke is likely to make an audible noise, especially if they hit an open string that’s not muted. An experienced player with fully learned technique who misplaces an escape stroke by a small amount might only glance the string. That kind of mistake would probably be inaudible most of the time, and almost certainly invisible without a camera.

If moving to a new string always forces you to hit a string that’s in the way, why not just play that string? Like swiping, it turns out that this is also something that great players do pretty often. Probably the most famous example of a trapped pickstroke in lead playing is the sweep, where a single trapped pickstroke plays two or more strings. Here’s sweep master Frank Gambale playing all six strings with one of his signature add2 shapes: 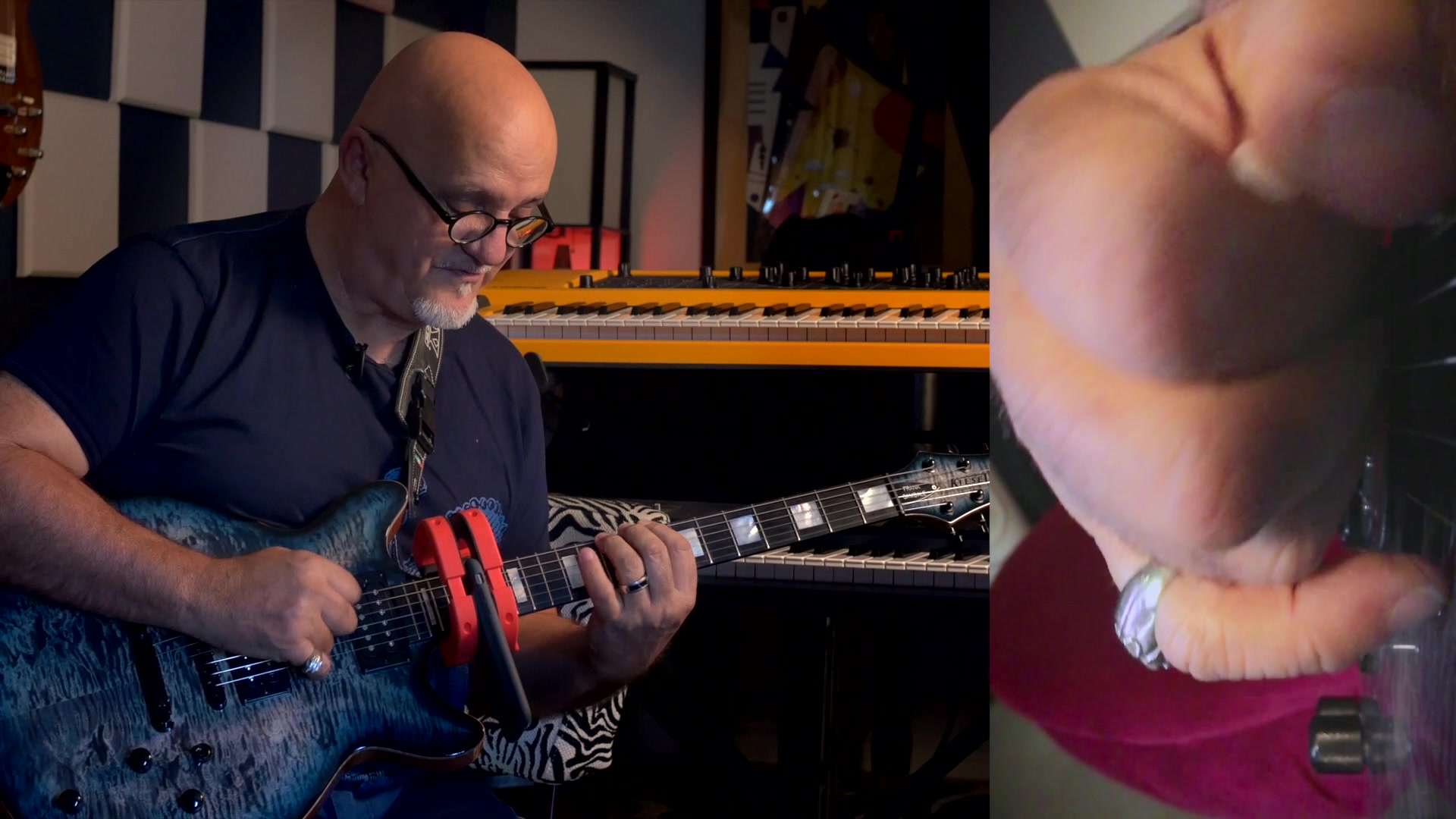 In this example, Frank plays an upstroke sweep — a trapped upstroke which flows across all six strings, sounding a single note on each of them. As you can see in slow motion, the pick simply flops over the top of each string as it moves past:

Technically speaking, there is a brief instant while the pick is playing each string when it is actually escaped. And of course this is the same thing that happens any time you pluck a string with a pick — the pick always flops over the top, a topic we cover in detail in the pick design and function section of the Primer. But this is really just the string pushing the pick out of the way, or vice versa. Frank isn’t actually making a motion that escapes, so we still think of a sweep as a trapped pickstroke as far as the playing technique itself is concerned.

You can sweep on upstrokes and downstrokes, across a few strings or many: 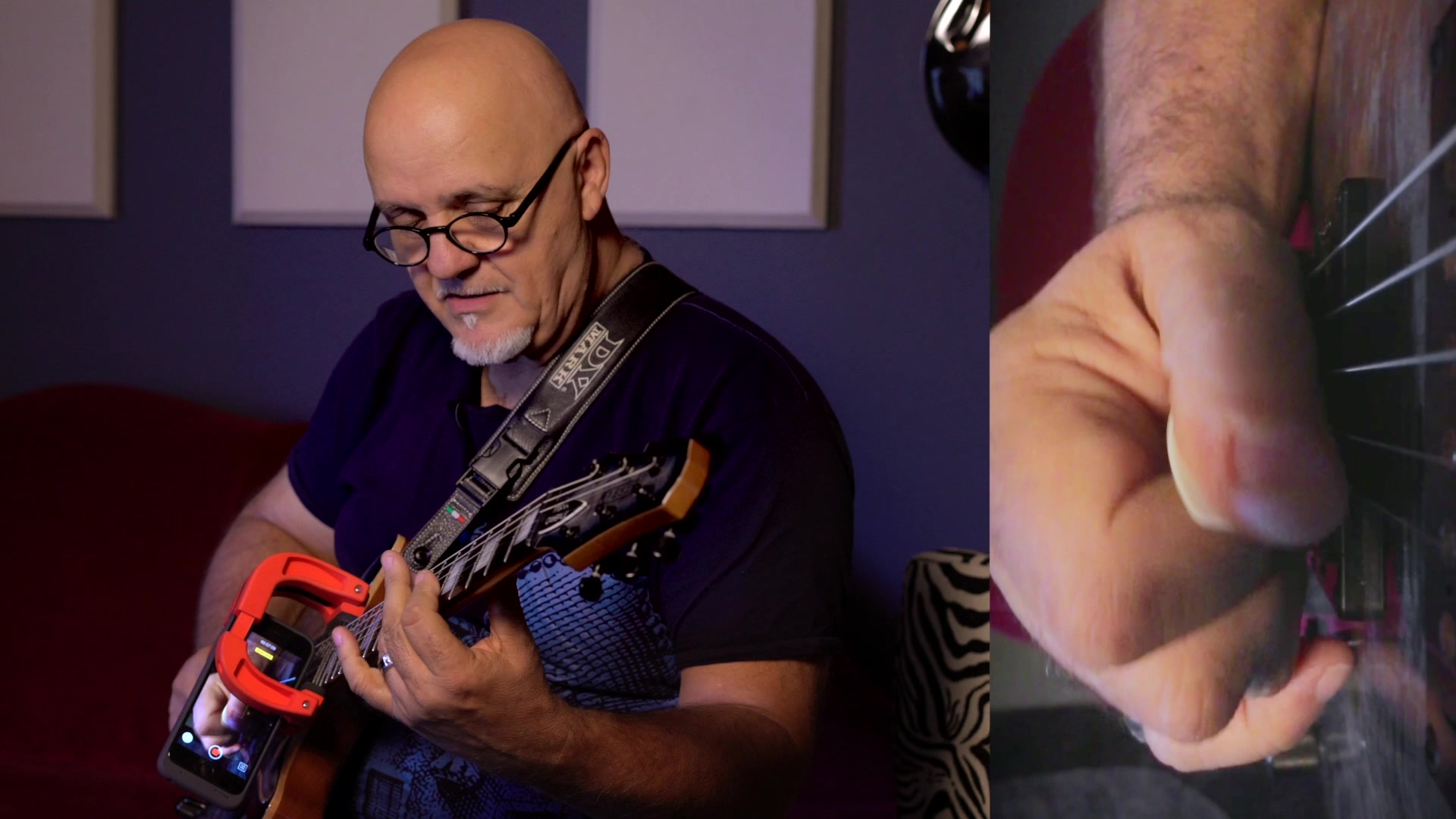 When you connect downstroke sweeps with upstroke sweeps as Frank is doing here, you are essentially making a really big alternate picking motion that encompasses multiple strings at a time. Because Frank is lifting his fretting fingers as he does this, we hear the phrase as individual notes rather than a chord whose notes run together.

Frank uses a combination of wrist and finger motion, but like many of the techniques we’ve examined, sweeping can be accomplished with a variety of different physical motions. Shred pioneer Michael Angelo Batio generates his famously smooth arpeggio sweeps using a combination of shoulder and elbow joint action to track the entire arm across the strings: 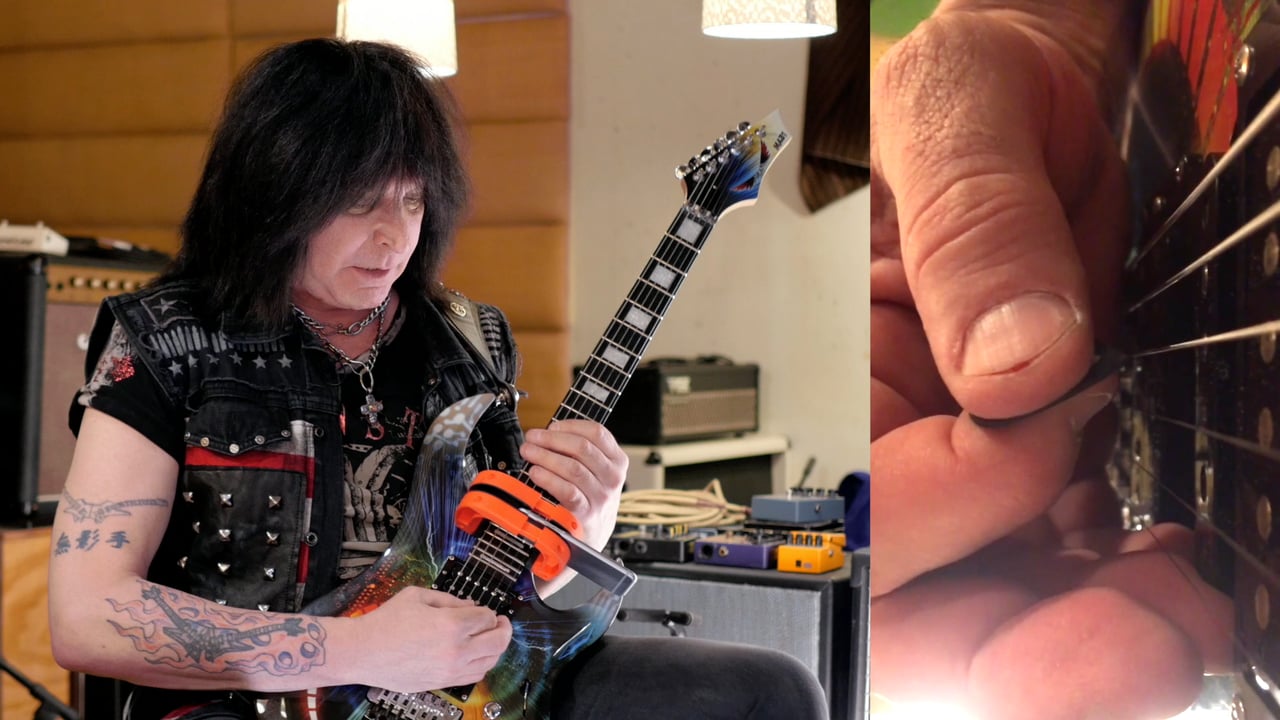 join Sign In
< PREV: DBX Motion
|
NEXT: Pickslanting >
Return to: