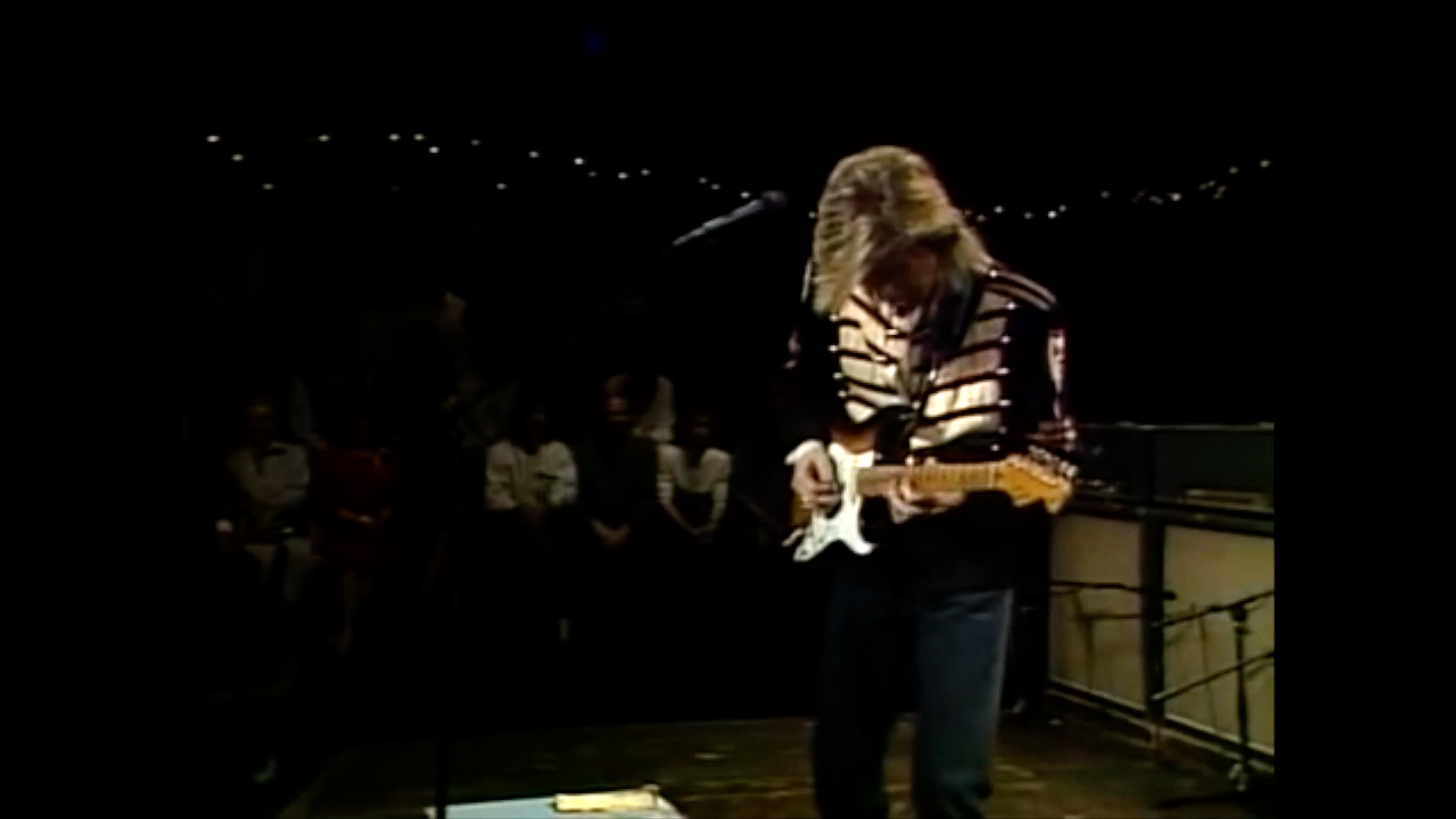 Now that we know the landscape, the most obvious question is, how we do traverse it? As with most things Eric, the answer is: cleverly. Eric draws upon a range of mechanically efficient mechanisms for moving effortlessly from one position to the next. The most common of these devices involves a slide:

In this example, two notes from the starting position are played with alternate pickstrokes — down, then up — and followed by a slide on the same string. The slide is the mechanism that moves the hand to the next lower position, where the picking structure resets and the line continues. In most cases, this means initiating a new phrase with a down-up alternate picking sequence on the same string, as in this example.

This type of slide shift, where the slide follows the initial picked notes on the string, is the most common form of positional shift in Eric’s vocabulary. In a slide shift, the slide itself is almost always one whole tone in distance, but doesn’t target a literal pitch, since the finger usually lifts before the destination. In this respect, it’s more like a grace note or other ornament of articulation. However it is unlike a grace note in that the slide reserves at least some of its own time rather than subtracting it from the surrounding notes. In the free-time world of Eric’s lead playing, where musical thoughts proceed blissfully at their own light speed, the brief ebb in the lyrical flow caused by sliding from one position to the next simply serves to unlink the line even further from the meter.

Sliding shifts can also split the picked notes on string:

In the split shift, a string’s two alternate pickstrokes are divided by the position shift. The split shift’s target is also more literal than that of the slide shift: it’s the middle note of a three-note sequence, and is played with the same duration as the other two notes in the phrase. The third note of the sequence, which occurs after the slide, is the upstroke that moves the line to a new string.

Like the legato turnaround we’ve already seen, the split shift phrase contains two picked notes and one that is unpicked. But because of its placement inside the phrase rather than at the end of it, and because of its execution as slide rather than a pull-off, it’s completely different in feel to execute. The phrase itself is entirely buttoned up — bounded by a picked note at its beginning and end — and so in some sense it is similar in feel to any continuous dwps phrase that begins on a downstroke and switches strings after an upstroke.

The third type of sliding shift is the most cryptic:

In the sweep slide, a two-string phrase of only three notes, rather than the usual four, initiates the sliding sequence. The two notes on the top string are picked as you’d expect, in a traditional down-up dwps sequence. But the third pickstroke — the downstroke on the lower string — plays both the third note of the phrase and the first note of the new phrase in the lower position. The sweep pickstroke and the position shift happen simultaneously, so that as the sweep arrives at the higher string, the hand arrives at the lower position.

Even stranger, it’s often the same finger that plays both notes as well, sliding from one string to another, and from a higher fret to a lower one, in synch with the downward sweep of the pick. Once in the lower position, the sweep downstroke initiates a new down-up sequence on the top string, and the phrase continues on its way.

As strange as the whole sequence sounds on paper, it’s really just the familiar two-string sweep from the fives sequence, except spread across two positions. The fact that the same fretting finger can often be used to do this sounds more difficult than it actually is. In fact, this kind of finger reuse is just an extreme form of fretting hand economy, almost like sweeping for the left hand. Because of the unusual number of notes involved, and the seamlessness of the transition, the sweep slide position shift is yet another melodic device intended to subvert any sense of regular time in the flow of the line.

This theme of subversion continues in the fourth type of position shift:

This three-finger shift utilizes the familiar down-up-legato technique to blend adjacent positions via two picked notes and a pull-off. The connection begins in the higher position, fretted with the pinky, and picked with a downstroke, to set up the three-note sequence. The middle note, fretted with the middle finger, is the upstroke, followed by the pull-off to the index finger, which is now one position lower. From there, the phrase continues on a lower string, very often with a single note swept back to the higher string, as in this example.

Because this shift utilizes a pull-off, it’s sonically stealthier than shifts that lean on audible sliding. It also typically employs unison notes that further blur the distinction between positions. In this example, the third through sixth notes of the lick are the same as the four notes that follow, just on different strings. This makes it difficult to tell by sound alone that a position shift is even happening.

Finally, one of the simplest types of position shifts in Eric’s style is strangely also the least common:

The straight shift is executed with pure two-note-per-string alternate picking and no overt sliding. And it’s interesting to note that when it does occur, it most frequently does so while ascending. Even though sliding up the fretboard is certainly possible, as we’ve seen with the pentatonic pickups we’ve already examined, it’s interesting to wonder why, within his free-form soloing, it’s not more common.

Like base pairs in a strand of DNA, this simple alphabet of transitional movements can be combined to create sophisticated chains of fretboard navigation. Often this involves finding a pathway from the box position to some strategic lower position:

One of the most heavily-trafficked routes in Eric’s cascading style links the box position to the third pentatonic position below it. In this example, the amazing sophistication of Eric’s improvisational versatility is on obvious display, with almost all the lead playing devices we’ve examined so far present in full flower. The pentatonic pickup leads to the legato turnaround figure, and almost immediately into a sequence of position shifts: a split shift from the box position to the fifth position, and then a slide shift from the fifth to the fourth positions. The fourth position’s box-like fingerings on strings 3, 4, and 5 lead to a three-finger legato transition down to position three. A sequence of overlapping sweep figures, including a unit of fives, cycles us to our target — the ring-finger root. And then a minor third melodic figure caps the phrase with interest and authority.