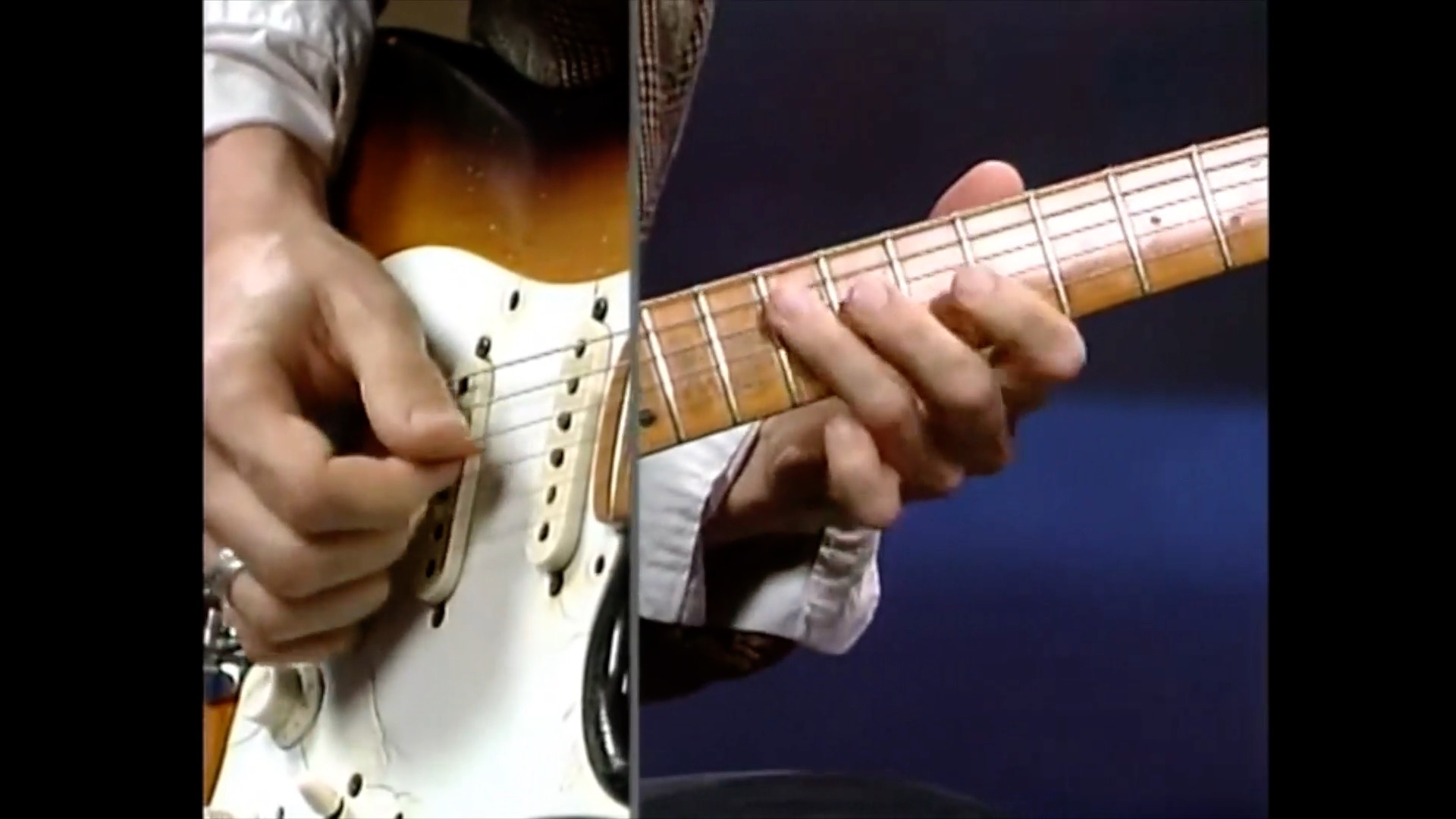 As it happens, in the years since the Austin City Limits performance, Eric released a pair of successful instructional videos through Hot Licks — Total Guitar, and The Fine Art of Guitar. Apart from Steve Vai or Joe Satriani, Eric was among perhaps the most mass-market names in virtuoso guitar. And so these videos became instant best- sellers on the instructional shelves of music stores everywhere.

In a widely disseminated passage on Total Guitar, Eric discusses his approach to picking technique. And despite his renown as a paragon of speed and fluidity, he begins, ironically, with a description of his use of stringhopping:

“One technique that’s very essential to me, playing with a pick, is what I call the ‘bounce’ technique. It’s where, actually, it improves the tone, I think. It’s achieved by the correct up and downstrokes, rather than playing side-by-side. It’s a question of… You’re actually going from the pickguard up [imitates angled picking motion]. So you’re brushing the string. And the idea of the bounce comes in when you’re playing fast [plays the fives sequence].”

In one nearly impenetrable paragraph, Eric manages to conflate just about every fundamental technique in picking mechanics into one mega-concept, where stringhopping (“the bounce”) equals downward pickslanting (“from the pickguard up”) equals edge picking (“it improves the tone… brushing the string”) equals high-speed string- switching efficiency (“comes in when you’re playing fast”).

Of course none of this was strictly logical — edge picking had nothing to do with downward pickslanting. They were two different pick angles. Edge picking altered the part of the pick that contacted the string, to promote smoother sliding over the string during the pickstroke, and also for tonal control. And pickslanting changed the trajectory of the pickstroke itself, causing it to move out of the plane of the strings — “from the pickguard up”, as Eric correctly put it.

And most paradoxically of all, the bounce technique didn’t “come in when you’re playing fast” — it was actually the exact opposite of that. It went away when he was playing fast. And the lick he played to demonstrate this — the familiar fives sequence — was nothing if not a perfect example of exactly this disappearance in action.

But, in a weird way, things were also starting to make sense. What was the difference between the obvious stringhopping of the “bounce” technique, and the hyper efficiency of sweeping, in Eric’s playing? Well come to think of it, I had never actually heard Eric use the term “sweeping”, or “economy picking”, or anything similar. Not in interviews, or on either of these quite extensive instructional videos, for that matter. Maybe what he was really telling us here is that there was no difference in his mind between the various ways he moved from one string to another.

In fact, for all I knew, Eric might not have even been aware he was using sweeping at all. As far as Eric was concerned, it may very well be that he thinks he’s always using repeated pickstrokes, and doesn’t realize that his trademark light-speed fluidity is attained precisely by eliminating them. This is really the only reason I could think of to explain why anyone would even try to maintain stringhopping at breakneck soloing speeds — especially when the alternative was not only easier, but something you were practically already doing in the first place.