Magnet Update: Where The Rubber Meets The Red 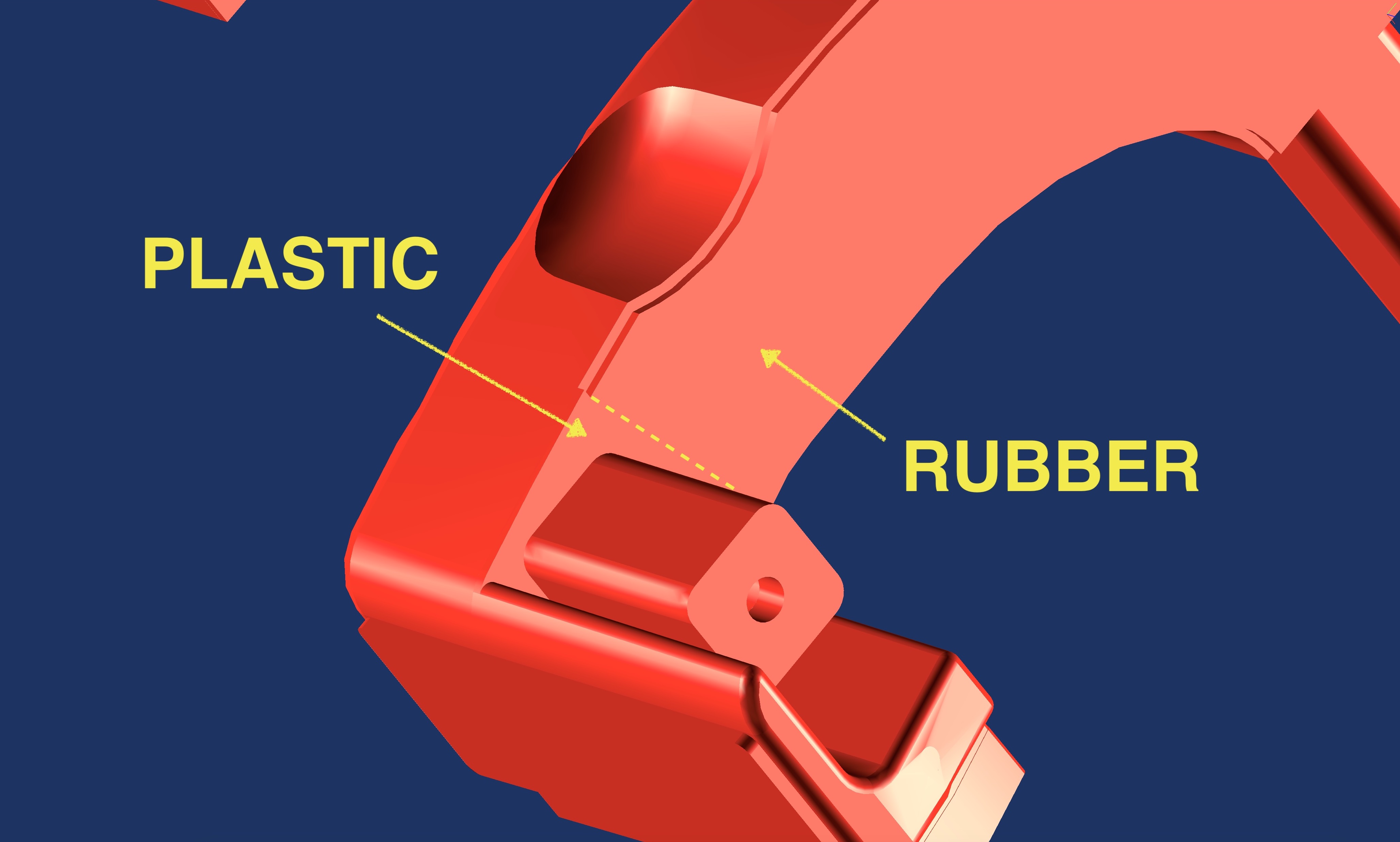 Magnet production moves forward as we tackle the technical challenge of crafting the rubber pads that grip the phone.

The Power of Overmolding

Devices like the Magnet, with a combination of plastic and rubber construction, are commonly produced with a two-step process. The first step is injecting molten plastic into a mold, or “tool”, to create the base part. We took a look at the injection molding process, and the tool we created to make the Magnet’s structural frame, in our last update.

Once the plastic parts cool, they’re removed and placed into a second tool, called an “overmold”, that precisely fits the inital plastic part, but leaves strategic air gaps where the rubber goes. Molten rubber is injected into these gaps, which cools, and the finished parts are removed.

Because the rubber is injected in liquid form, the plastic and rubber fuse together during cooling, forming a strong bond with no extra adhesive required. And because you’re not simply cutting out and gluing a flat rubber sheet to a surface, you can create all kinds of complex shapes that follow the countour of the underlying plastic in three dimensions.

Adam on our team once summed up kitched gadget manufacturer Oxo, whose products we both use, as “plastic things with grippy parts”. True enough, Oxo’s line of measuring and mixing bowls is actually branded “Good Grips”, and features svelte curves that transition seamlessly from plastic to rubber and back:

In theory, overmolding should allow us to design the Magnet’s rubber grips in any shape we want, and attach them in a way that resists peeling even after rigorous use. But the process isn’t all-powerful, and requires the part you’re designing to allow adequate thickness to apply enough rubber.

In some respects, the Magnet’s design works well for this. Its two central halves have deep wells hogged out, like a chambered Les Paul, to save weight and also to allow the plastic to cool quickly and evenly in the mold:

The resulting cavity leaves a lot of space to fill up with rubber, providing plenty of thickness for strength and bonding surface area with the plastic. This works great for the central gripping pads of the device.

The interlocking sliding parts are another story. Our original design allowed the rubber grips to flow around these more complex parts in a thin border, like the weather strip on a car window. But because of that thinness, our factory’s first stab at overmolding this rubber pinstripe resulted in a film of goo that refused to bond.

The solution to this was to eliminate the rubber from the lower half of the part entirely. As you can see in this closeup, the area above the hashed line is still the grip pad. But below it, we’ve expanded the thickness of the plastic to bring it flush with the pad above it:

Doing this is tricky. Recall that the tool is basically a big hunk of steel. Once it’s created, you have limited options for tweaking it. If you want to make your parts bigger, you can carve away at the tool, removing metal, and providing more space for the plastic to fill. We have actually provided for this in our design, so that even once the initial Magnets are successfully molded, we’ll be carving away at the tool to make the parts bigger and the tolerances tighter, for more precise operation.

But if you want to shrink your parts, you’re out of luck. You can’t add more steel to the tool if it’s not already there to begin with. So in this case, we’re lucky. We’re only making things bigger, so we can strategically carve the tool to thicken the plastic beneath the grip.

These overmold tests and the tool tweaks to fix them have taken time. We talked about shooting for January in our last update, but it looks like we’ll be later than that at this point. Ultimately, the date we finish is entirely dependent on these somewhat unpredictable technical challenges in the manufacturing process.

Considering we can’t really say when we’ll get through them all, we’d rather not keep picking dates and missing them. Instead, what we can do is simply keep you posted as we have been. For now, we’d like to get the overmold working, and once we do that, we’ll be much closer to something we can assemble and actually test for tolerances.

Thanks for your patience on this, and of course thanks for backing the Magnet!