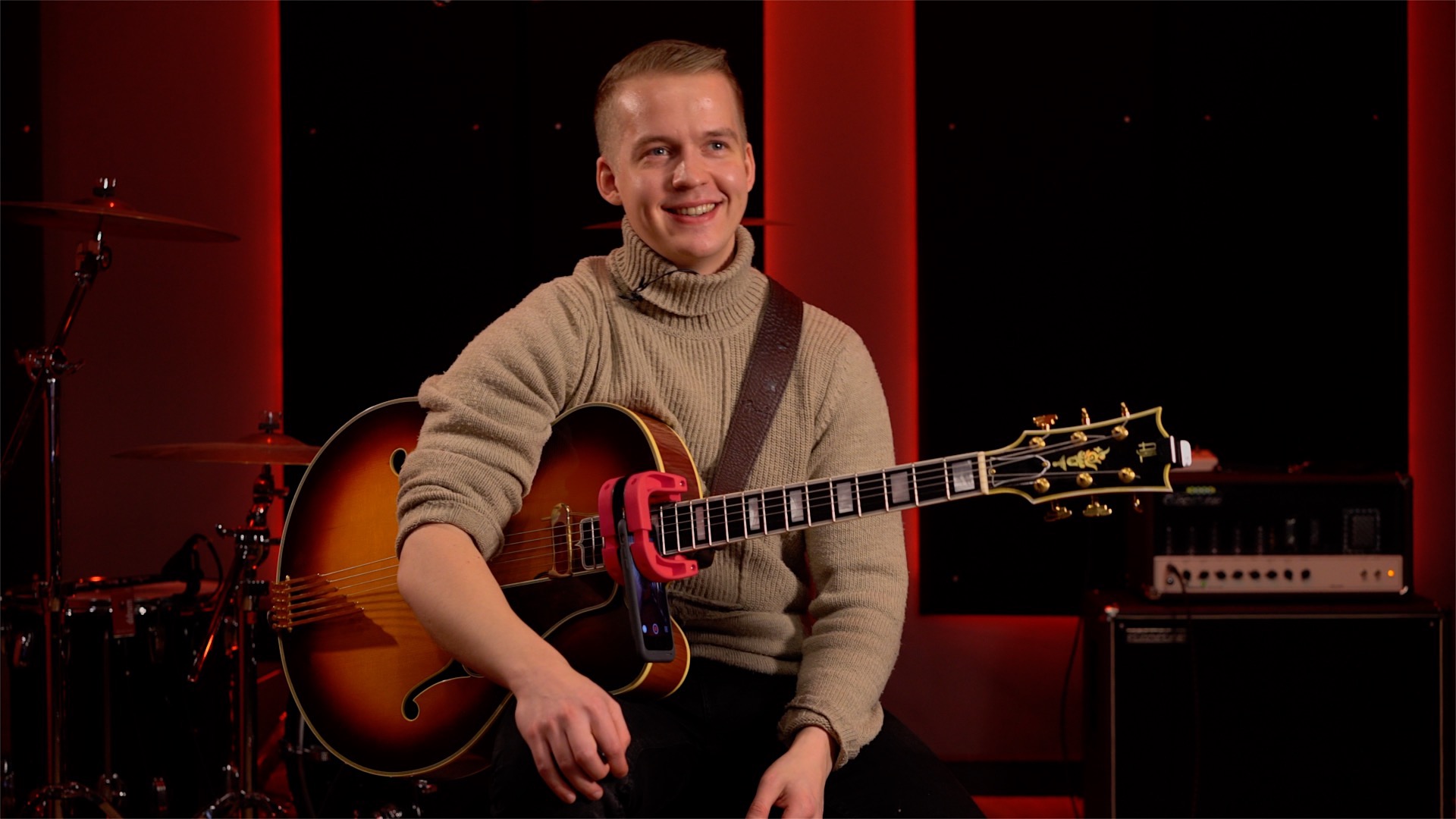 Cracking the Code members, our latest release with jazz and Gypsy swing wizard Olli Soikkeli is here! Olli Soikkeli’s tasty vintage stylings wouldn’t be out of place at a jazz age lawn party with linen suits and coupe glass cocktails. But when he fires up his 21st-century alternate picking technique, you’re about to take a ride in a DeLorean time machine of jazz guitar.

Olli was heavily influenced by Django and the Gypsy swing style, and broke out about ten years ago when he was still a teenager as something of prodigy in that scene. Reviewing clips of his playing from that time, it’s easy to see why. The elements of Gypsy style are all present, from the driving pick attack to the ferocious high-speed virtuosity:

What you don’t notice right away, and which Olli discusses in the interview, is that he’s actually not always getting the sound with Gypsy technique. Olli is principally an alternate picker, not a one-way economy player like the Gypsies. While he will indeed play certain phrases with a heavy downstroke accent, Olli’s actual picking motion isn’t a downward pickslanting-style USX motion, but actually a curved double-escape motion more similar to what the bluegrass players use.

In the interview, we discussed that Olli is aware that he has two technical modes of sorts — one more Gypsy and another more pure alternate. What he wasn’t aware of, and what the camera eventually reveals, is that his Gypsy mode isn’t really a Gypsy mode. Even when he’s hitting those downstrokes hard, he’s still doubly escaping and able to play challenging pure-alternte repertoire like alternate picked arpeggios.

Another surprising element of Olli’s musical style, and also atypical for such an accomplished Gypsy jazz player, is his embrace of the Brazilian choro genre. The progenitor of Samba, Choro is an afro-Brazilian musical style typically played in small groups with a unique instrumentation including acoustic guitar, hand percussion, Brazilian mandolin or bandolim, and cavaquinho, a small four-string instrument in the guitar family.

Traditional choro guitar is actually a seven-string nylon and played with fingers and thumb pick, combining bass accompanient and lead playing in a single package. Olli plays out frequenty in New York City with choro maestro Cesar Garabini, and the two apply their diverse mechanics and stylees to choro and swing standards in a blend that works amazingly well.

Here’ s an analysis piece on Olli’s technique that opens with just such a duet between Olli and Cesar, the traditional choro tune “Alumiando”:

Grab a download copy now in the store, or sign up for an all-access subscription which includes access to this interview plus everything else on the site.