Get Ready To Rotate! 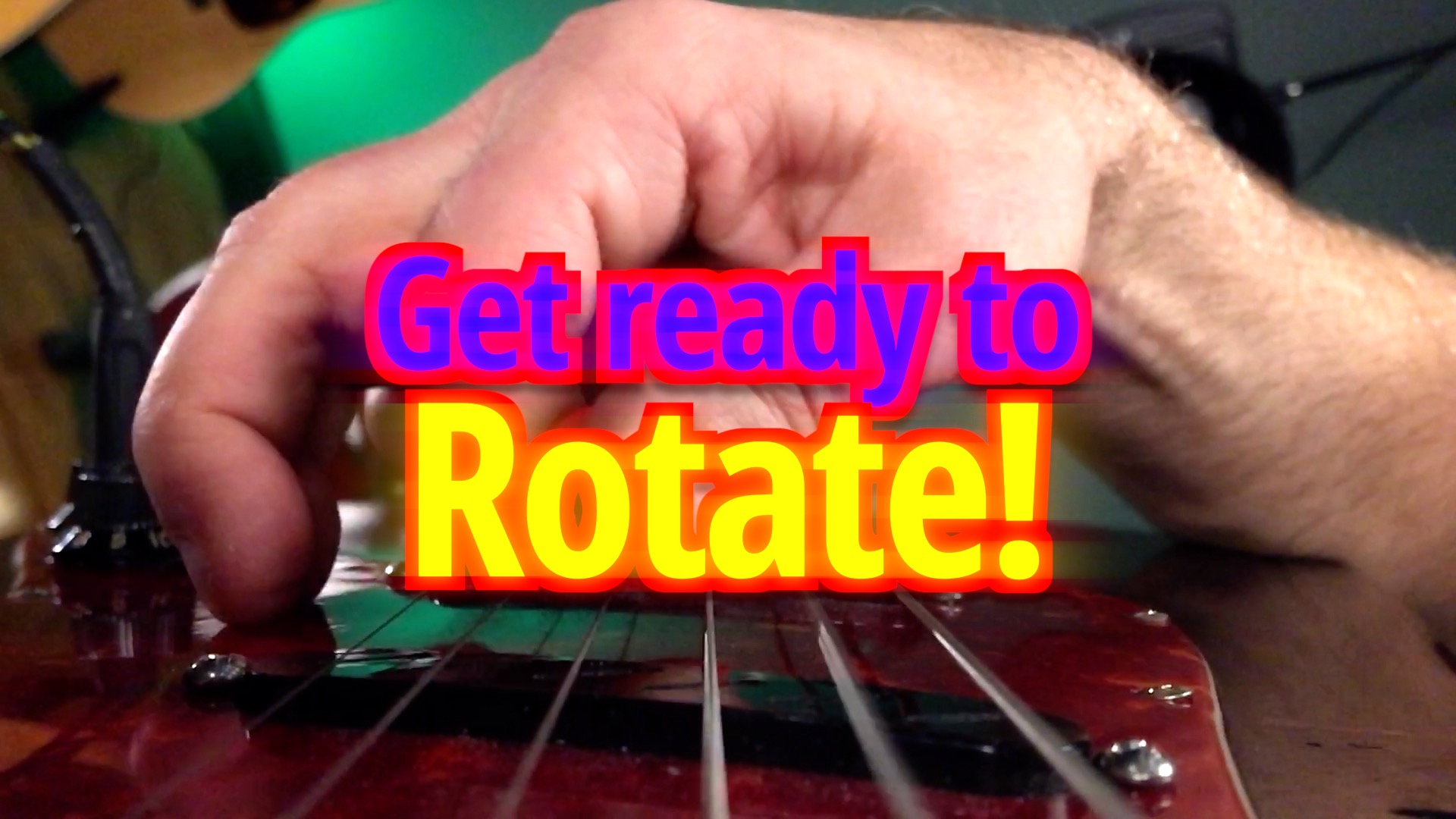 The forearm is one of the most important joints in all of picking technique. And in the newly updated Forearm Motion section of the Pickslanting Primer, we’ve rolled out over one hour and forty minutes of in-depth, hands-on tutorials for getting its many superpowers working in your own playing.

That’s right — ten chapters covering not just the core motions, but all the practical stuff you need to get these motions happening right now: pick grip, arm position, muting, tracking, and sweeping. We even cover the Gypsy jazz “flexed wrist” form, including how to make it work on high-gain guitar with surprisingly effective noise control.

We may think of the forearm as a part of our arms, but it’s also a joint, a dual distinction made possible by he ingenious design of the bones within it. There are actually two of them — the ulna, which is closer to the pinky side of the hand, and the radius, which is on the thumb-side.

And the reason the radius gets the cool superhero-sounding name is that it can actually rotate, tracing an arc around the ulna. Rotating toward the body is the motion of “pronation”, and rotating in the opposite direction is the motion of “supination”. But for simplicity we can just think of both directions of motion, collectively, as “forearm rotation”.

So when you turn your arm back and forth, which some people describe as “turning a key in a lock”, what you’re really doing is operating a joint. And that joint is not actually your wrist joint, but the articulation surfaces between your arm bones. Which is really cool, because when we think of how joints work, we normally imagine hinge-type joints, like the elbow, or ball-in-socket joints, like the shoulder. But the forearm joint works by spinning your whole forearm longitudinally.

Get Ready to Eddie

Because the ulna remains relatively stationary as the forearm rotates, you can use it as an anchor, resting it right on the guitar body, and accomplishing this awesome thing:

This is, of course, Eddie Van Halen’s iconic tremolo technique. And it is a marvel of mechanics that sounds as good as it looks. Smooth and purring, with consistent tone and effortless energy. Along with tapping, it’s probably the closest thing to learning a “moonwalk-level” trick you can do on guitar. And of all the picking motions, it is the one most visually demonstrative of what pure forearm rotation looks like. In the rotation chapter of the new Forearm Motion section, we show you how to use it not just for tremolo, but for the kind of high-speed synchronized Malmsteen-style single-string phrases that start moving and keep moving for sustained lengths of time.

The most common use of forearm motion in picking technique is when it operates in a cooperative role, alongside the action of other joints. This type of motion blending, which neuroscientists call coupling, occurs most frequently with the wrist, and can create the kind of sophisticated motion paths needed for switching strings, sweeping, strumming, and more.

Probably the most famous forearm-coupled picking style is Gypsy picking, which we address at length in the new Primer sections. This includes an in-depth investigation of the amazing Joscho Stephan’s effortlessly masterful motion. We address not just the distinctive “flexed wrist” form used by Gypsy players, but even take some time to translate it to high-gain guitar styles, where its speed and string switching capability can make it a powerful weapon.

Marty Friedman and Michael Angelo Batio have used Gypsy form for high-gain playing for decades, as has of course Eddie Van Halen when he locks into tremolo mode. And one counterintuitive aspect of doing this is how effective noise control can be despite the utter lack of picking-hand contact against the strings. In Chapter 10 we look at a handful of cool tricks for controlling that noise, and it’s really surprising just how quiet you can be once you get them all happening. We’ve made that chapter free on YouTube, and you can watch it right here:

For more traditional muted approaches, the bridge-anchored form of coupled forearm and wrist motion is something of a paradox. It maintains reliable contact with the bridge and strings, permitting Teemu Mäntysaari-style virtuoso metal muting. Not only does this not seem to impede the smoothness of the motion itself, but it even permits tracking across all six strings without needing to move the arm’s anchor against the body. And this is… pretty surprising!

You can see clearly in the closeup Magnet shots in the new footage just how far you can track without altering the forearm-body anchor that most of rely on. This enhanced tracking ability is one of the characterstics of coupled forearm-wrist motion, and especially Gypsy-style “flexed wrist” form, that provides its trademark stable and relaxed feel.

How do you watch all this awesome stuff? If you’ve got a Cracking the Code membership, then you’re already set. Just head here and dive right in: 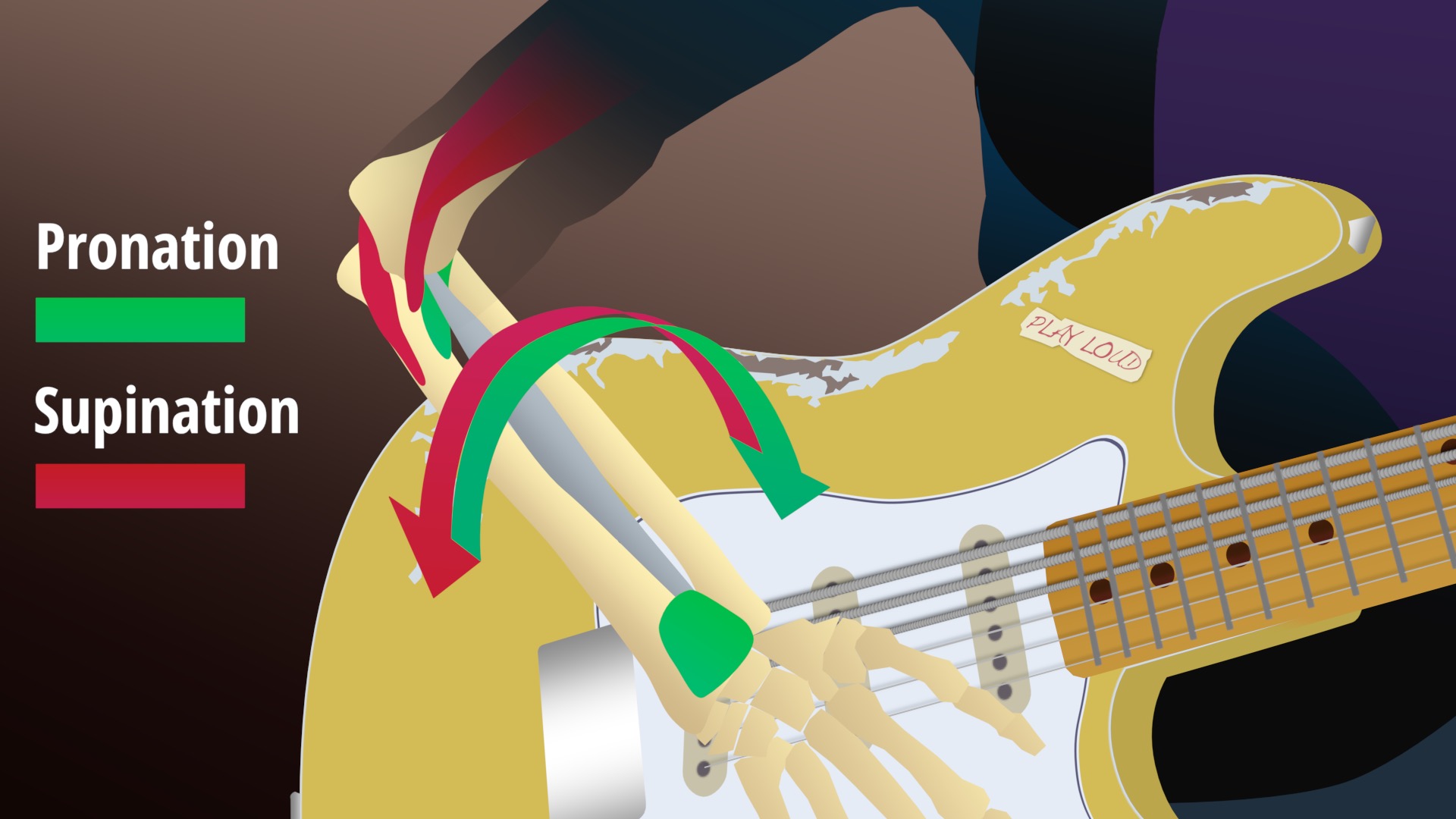 This fascinating joint is an important collaborator in many picking motions

If you’d like to pick up a download copy of the Primer, you can do so in our store, and you’ll still continue to receive updates, for life, whenever we add new lessons. We started out with the Pickslanting Primer four years ago and have never stopped improving it.