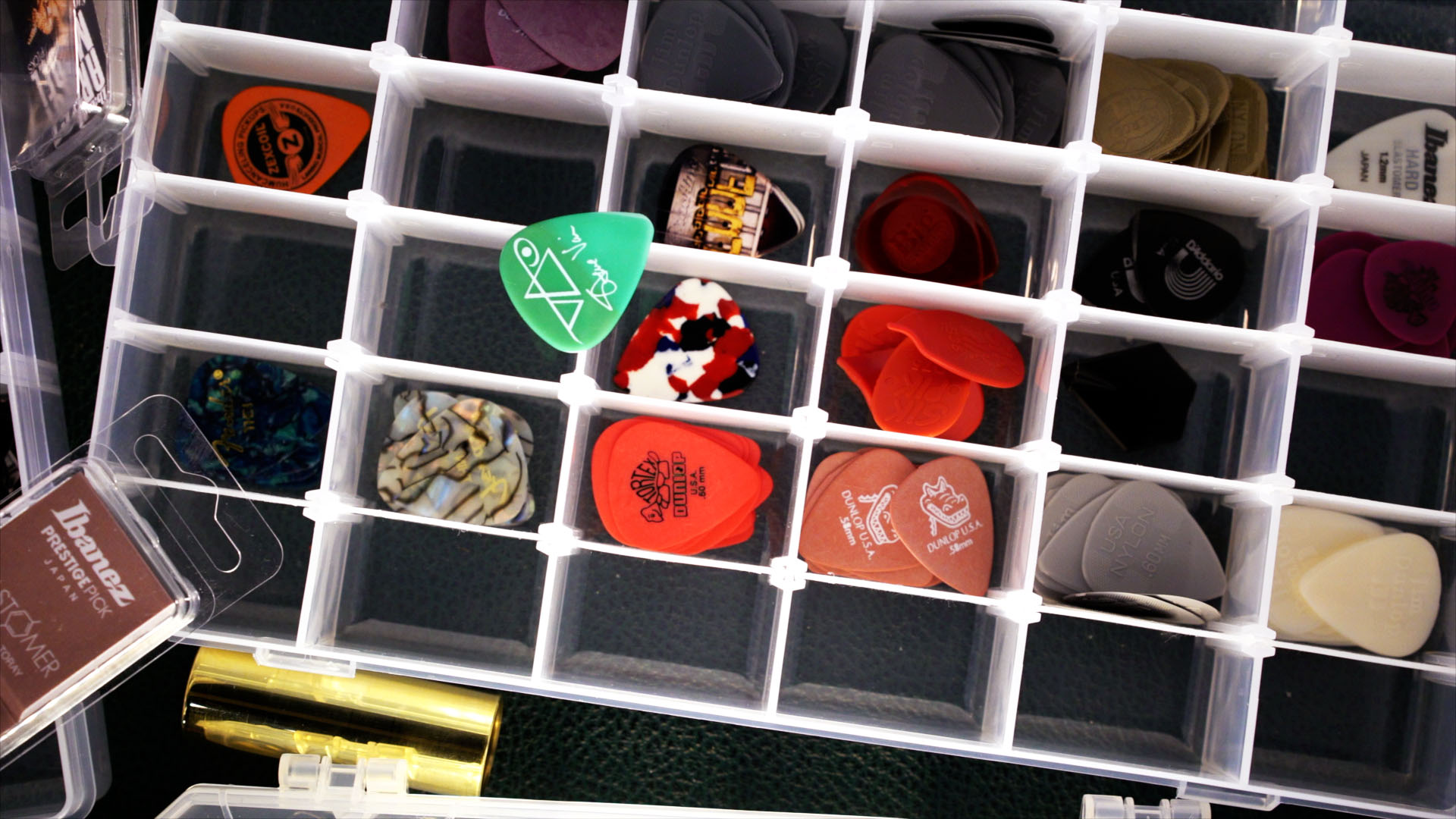 One of our top priorities this year is improving our intro tutorial material to cover even more fundamentals of guitar picking and technique. To that end, the Pickslanting Primer now has an awesome introduction to the tools we as players use most intimately: guitar picks!

If you consider just the topics of pick choice and pick grip together, you’ll encounter an overall level of technical complexity that practically rivals instrument technique itself. This is especially true compared to more technologically advanced instruments like keyboards, which do much more of the actual tone production work for you.

In fact, when it comes to the sheer mechanical variety of ways to tune and pluck guitar, and the general level of voodoo that great players need to learn before even playing a single note, the guitar is maybe most similar to the drums. Just ask a handful of great drum techs what they do with the bottom head on a snare or a tom, and you’ll get a different answer from each of them. They’ll all be right, and they’ll all sound great! And don’t even get us started on head material, coatings, shell wood, paint, wraps, damping, venting, and…

In short, picks are one of your most important pieces of gear, there’s just so much weird mechanical stuff going on, that we thought it fitting that the definitive instructional product on their use should have a suitable introductions to them. Not only that, but we wanted that introduction to be accessible to both experienced and new players alike, since we count both among our viewers.

Across ten chapters and two hours of guitar pick history, tests, and analysis, we take a look at the most common pick designs to understand their effects on playability and sound. This includes getting to the bottom of what attributes like thickness, point geometry, edge geometry, taper, and material choice have on tone and dynamics. Along the way, we’ll ask some fundamental questions about the deceptively complex interaction that happens when you actually try to play a note with a pick.

We’ve been working on this one all year, and frankly it was a f**k ton of work. Way, way more than we anticipated when we thought, hey, our product should, you know, say something about how to choose a guitar pick. Instead, things got out of hand as usual and we gave it the whole Cracking the Code treatment of objective frequency comparisons and musings about the physics of pick and string interaction.

To that end, one of the interesting things we discovered is that Edge Picking™ is one of the most fundamental effects in guitar pick function. Many differences in pick performance and tone production between pick designs only show up when you introduce and/or change the edge picking you’re using. This includes differences in frequency response due to point geometry, material choice, gauge, and probably other things, all of which are muted to nonexistent when you play picks flatter against the string, with lower-degree edge picking.

In our chapter on Edge Picking, we offer some musings on what that might be, including modifying picks to have asymmetrical leading and trailing edges to see what effect this has on the sound. We would like to thank estimable forum user Tommo, an optical physicist by trade, who reviewed our vector math for accuracy and was responsible for clarifying our analogy with billiards balls — which we nixed, grazie mille! — and straightening out our use of loaded terms like force, momentum, and energy. Hopefully we got it all right.

The long and the short of it is that our core instructional product is rapidly becoming (if it isn’t already) the most comprehensive introduction around to picks and picking technique for new and experienced players alike. It now has a proper introduction to the principal tools of the trade. And we’re glad to have finished it.

If you’re an experienced player, we’ve attempted to put some practical tests behind observations you may have already made and perhaps a few you haven’t. The results of our investigations aren’t always what we expected.  That’s why we learned a ton in the process of conducting them.

If you’re new to picking technique, what we’d like to give you is the kind of perspective that experienced players have about picks and how they work, so that you don’t have to spend the next few decades trying them all — even though you might just do that anyway!

If Pick Design and Function sounds like something you’d enjoy, you can watch the new material right here!