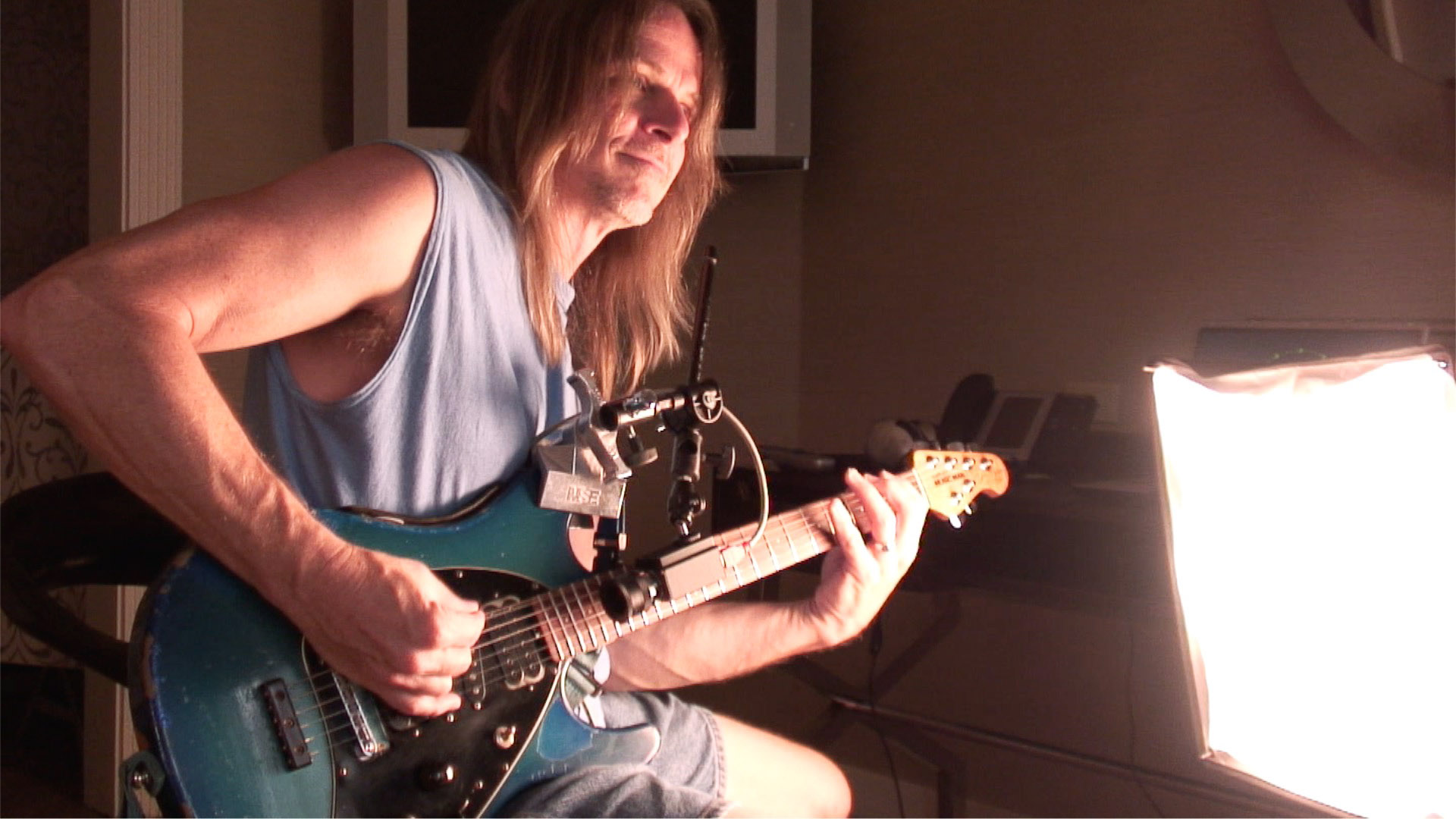 Steve Morse’s almost mythical musical capabilities need no introduction. Marrying blazing chops to a singular sense of hook writing creativity, his distinctive brand of rootsy American virtuosity has inspired generations of players to think outside of the pentatonic box.

Morse is renowned for reeling off what he calls “un-guitaristic” lines of seemingly impossible complexity. These keyboard- and fiddle-inspired trademark phrases often consist of no more than a single note on any given string. This kind of one-note-per-string arpeggio picking is typically regarded as the domain of fingerpickers, not flatpickers. And yet the effortlessness with which Morse nails these gymnastic routines is the obvious clue that something mechanically magical is happening under the hood.

I was fortunate enough to interview Morse for the Cracking the Code documentary project, and the high-speed camera provides a rare look at the mechanical magic of his arpeggio picking technique. Morse himself has written on a number of musical topics right here at Guitar World under the “Morse Code” banner. And now it’s time to take a crack at identifying the elusive ingredients of his arpeggio code.

Getting into the Swing

The most important of those ingredients is rotation. Morse moves the pick with a highly unique rotational method which is immediately apparent under the camera: 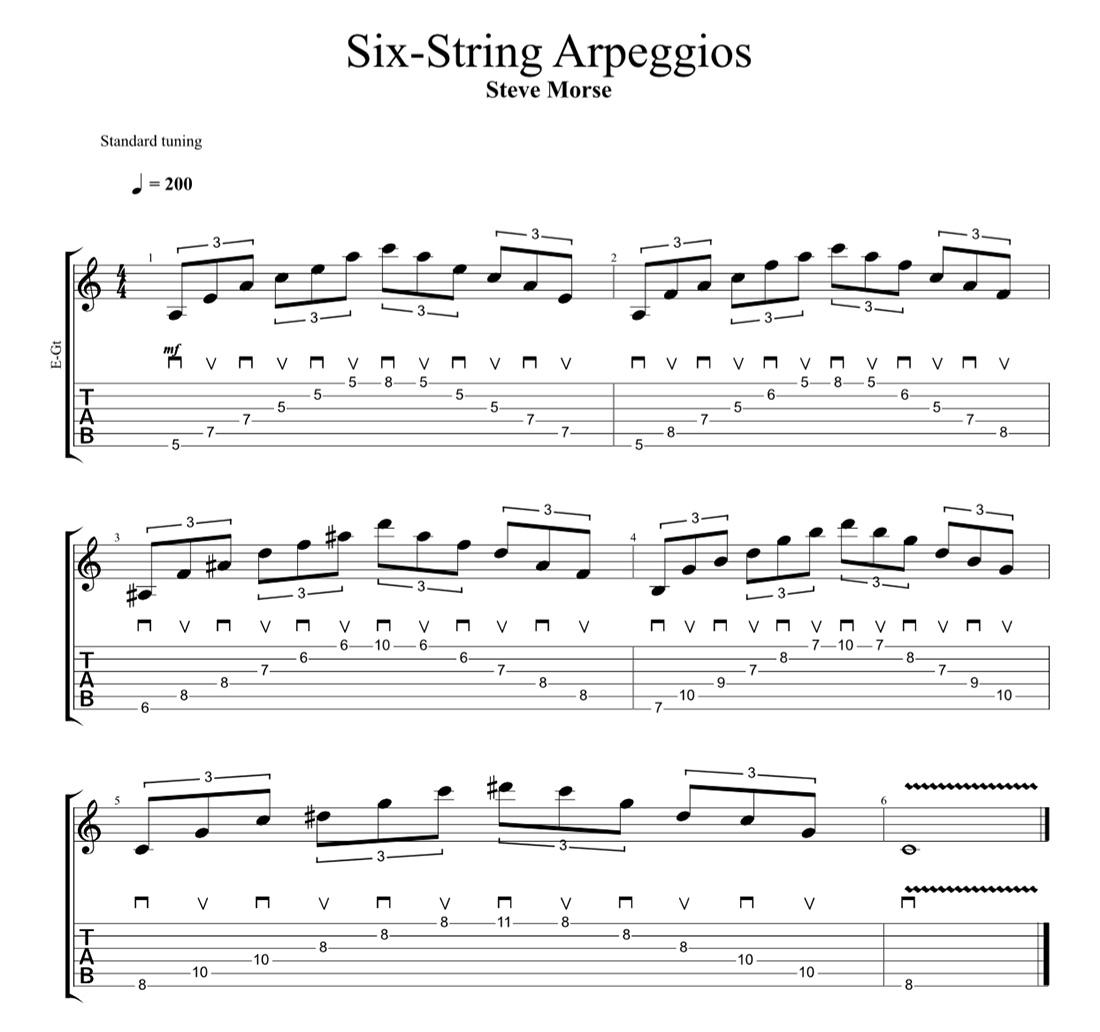 This smooth, graceful swing serves dual purposes. The most obvious is simply as a way of generating the alternate picking movement itself. In Cracking the Code terminology, we call this the “motion mechanic”. Morse’s smoothly swinging motion mechanic is very beautiful, and quite different from what we see when we look at most other hyperspeed pickers.

For example, Morse contemporaries like John McLaughlin and Al Di Meola both utilize wrist-based movements which move the pick back and forth in a mostly flat plane: 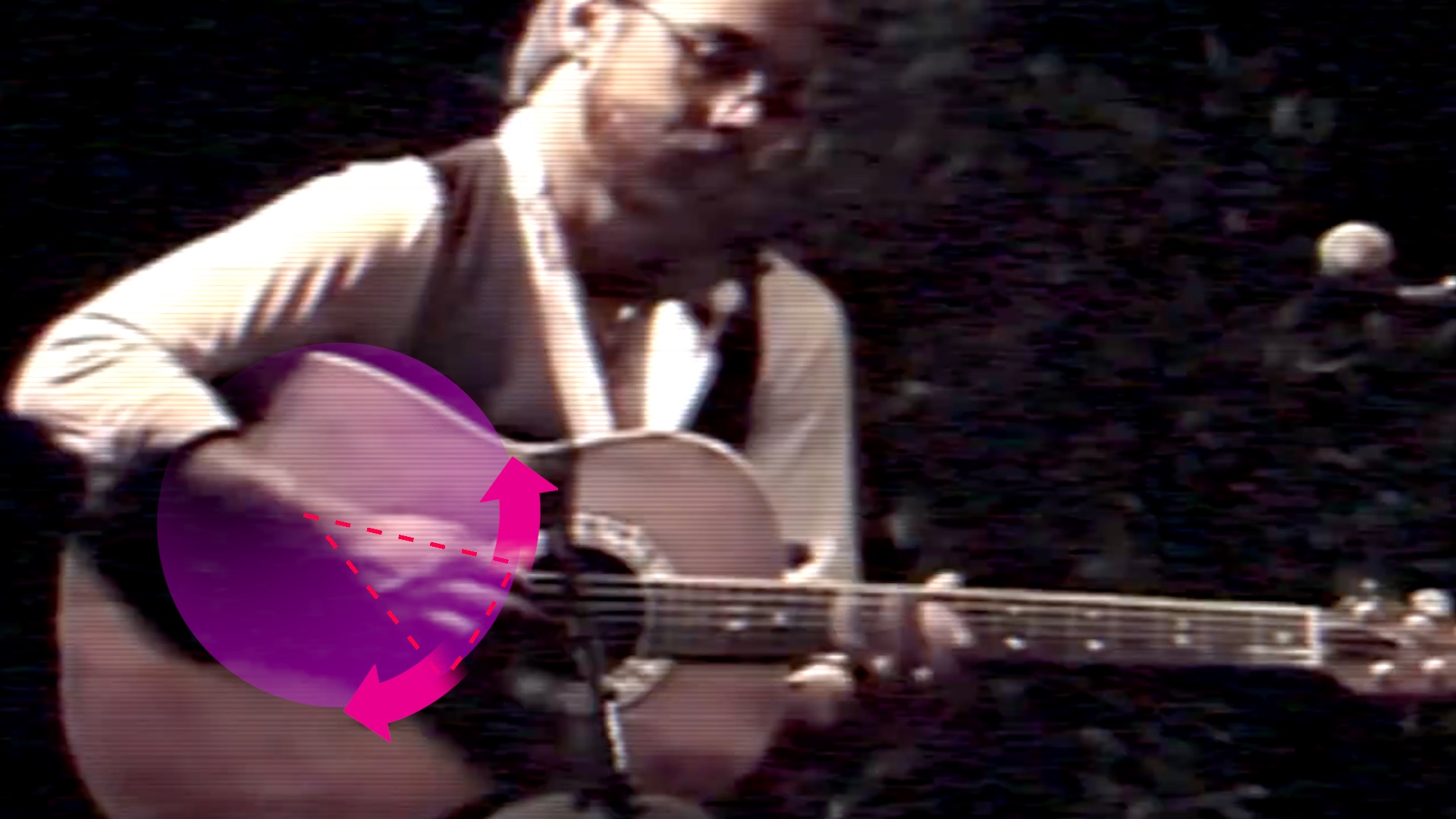 Anatomically, this type of side-to-side, “clock face” movement of the wrist is what we’d call “radial-ulnar deviation” — or simply wrist deviation, if you like. Along with rotational movements of the forearm, wrist deviation is probably one of the most common motion mechanics in guitar picking.

But how do you take a flat movement like deviation and, somehow, jump over to a new string? We’ve already seen in this column how both Eric Johnson and Yngwie Malmsteen get around this problem, and the solution is pickslanting.

In the pickslanting world, the plane of the picking motion is angled so that every other pickstroke lifts above, or “escapes” the strings. This can happen on all the upstrokes, like it does in Malmsteen and Johnson’s approach. Or it can happen on all the downstrokes, as in the McLaughlin and Di Meola approach. Either way, it requires at least two notes on a string in order to work.

Rotation to the Rescue

But in Morse’s arpeggios, we have to switch strings after every single note. And for that, we’re going to need more than pickslanting. And this is where the second purpose of the motion mechanic reveals itself. The gentle arc of the picking motion allows the pick to rise above the strings with every pickstroke. So it’s not just a motion mechanic — it’s also a string-switch mechanic. And to achieve this effect, rather than using small movements, we actually have to go big: 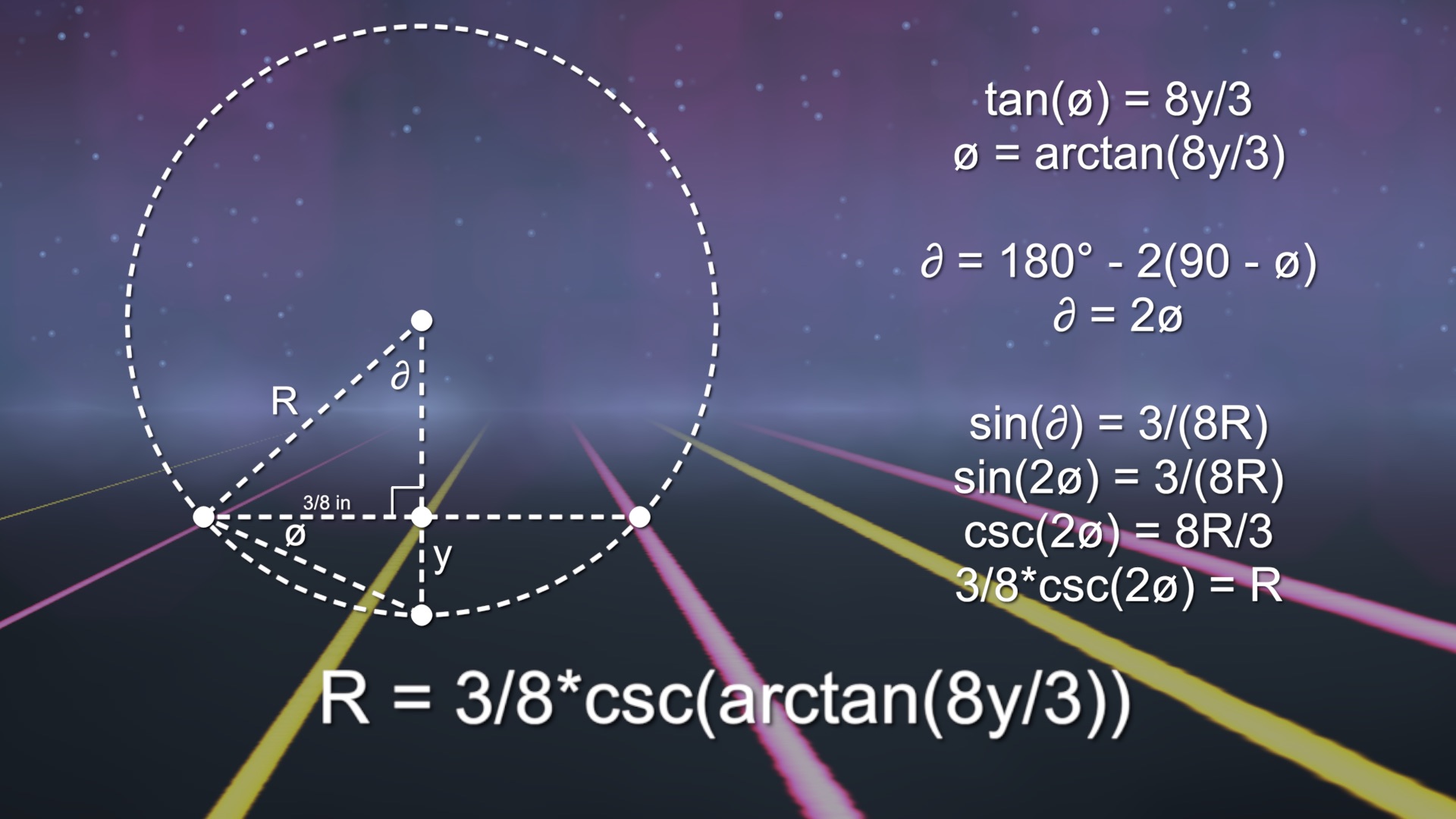 With the help of a little high school trigonometry (SOHCAHTOA anyone?), we can see that the flattest possible swing is paradoxically achieved, not by using the smallest possible picking movements, but actually by using the largest. If we use anywhere from 1/16th to 1/8th of an inch of pick on the string, which is variable “y” in our graphical example, we can achieve a maximum pickstroke swing, which is radius “R”, of anywhere from 1 to 2 inches without hitting any of the surrounding strings. And when we look at Morse’s playing under the camera, this is exactly what we see: 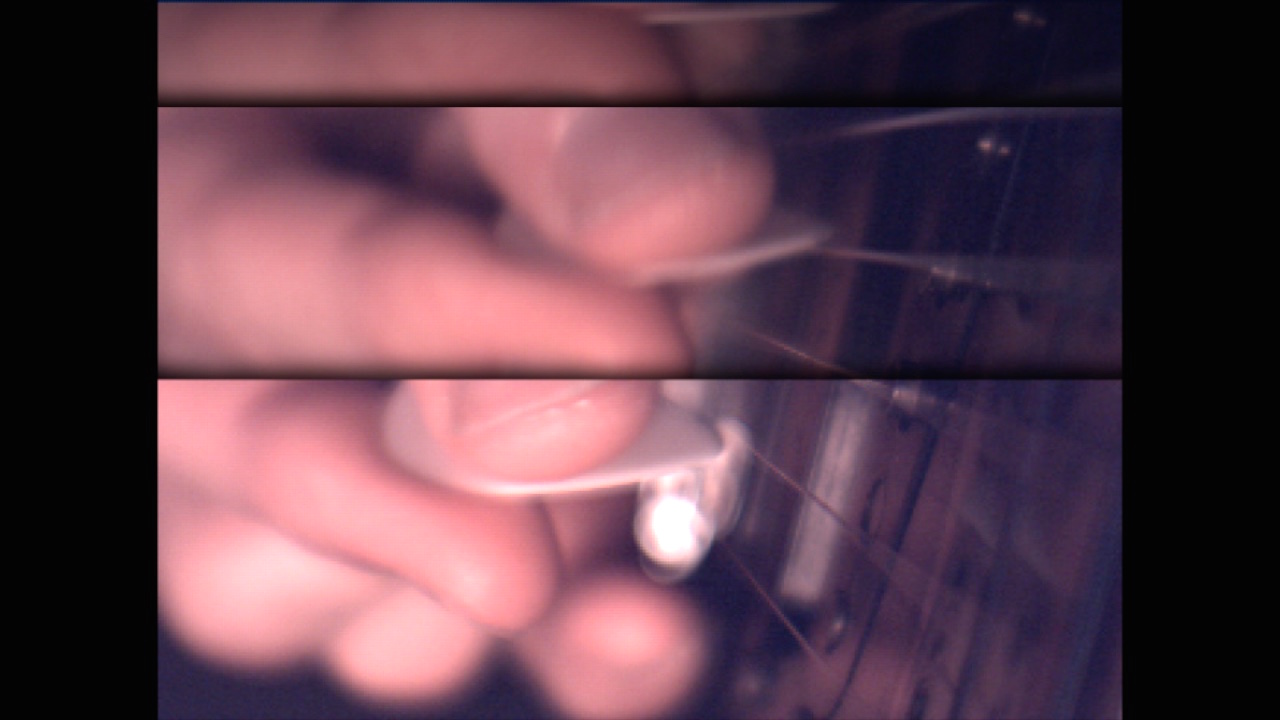 The pickstroke that hits this note on the D string actually begins its travel way up above the low E string, and finishes its travel way down above the B string. That’s a four-string spread, or approximately an inch and a half. Incredible. The arc is so wide and flat, that when viewed from a few feet away, as I did when I interviewed Morse, it’s almost entirely invisible. This flatness is where the speed comes from.

On the Right Track

One challenge of performing Morse’s swinging rotation is keeping it centered above the string you’re playing. That’s a process we call “string tracking” in Cracking the Code, and it is commonly achieved several different ways:

If you hard anchor the wrist to the bridge, you can use wrist deviation as the string tracking mechanic, tracing out the clock face movement we’ve already looked at. If you loosely anchor the wrist, you can use an elbow and shoulder method of string tracking that looks almost like sawing, where the entire forearm slides across the strings. Or you can blend the two, as many players tend to do naturally without thinking too much about it.

The point here is that if you only have one note on every string, you’ll need to cover a lot of territory quickly, and string tracking is what allows you to do that. You may need to vary the speed of it, or perhaps vary the particular method you choose to achieve it, but timing it exactly right is what helps keep the swing of the pickstrokes from hitting the surrounding strings.

The third and perhaps most unexpected ingredient of Morse’s arpeggio picking technique is one we’re already familiar with: pickslanting. In addition to generating the swinging pickstroke, and tracking it across the strings, it turns out that Morse also simultaneously slants his pick slightly in the direction the lick is moving: 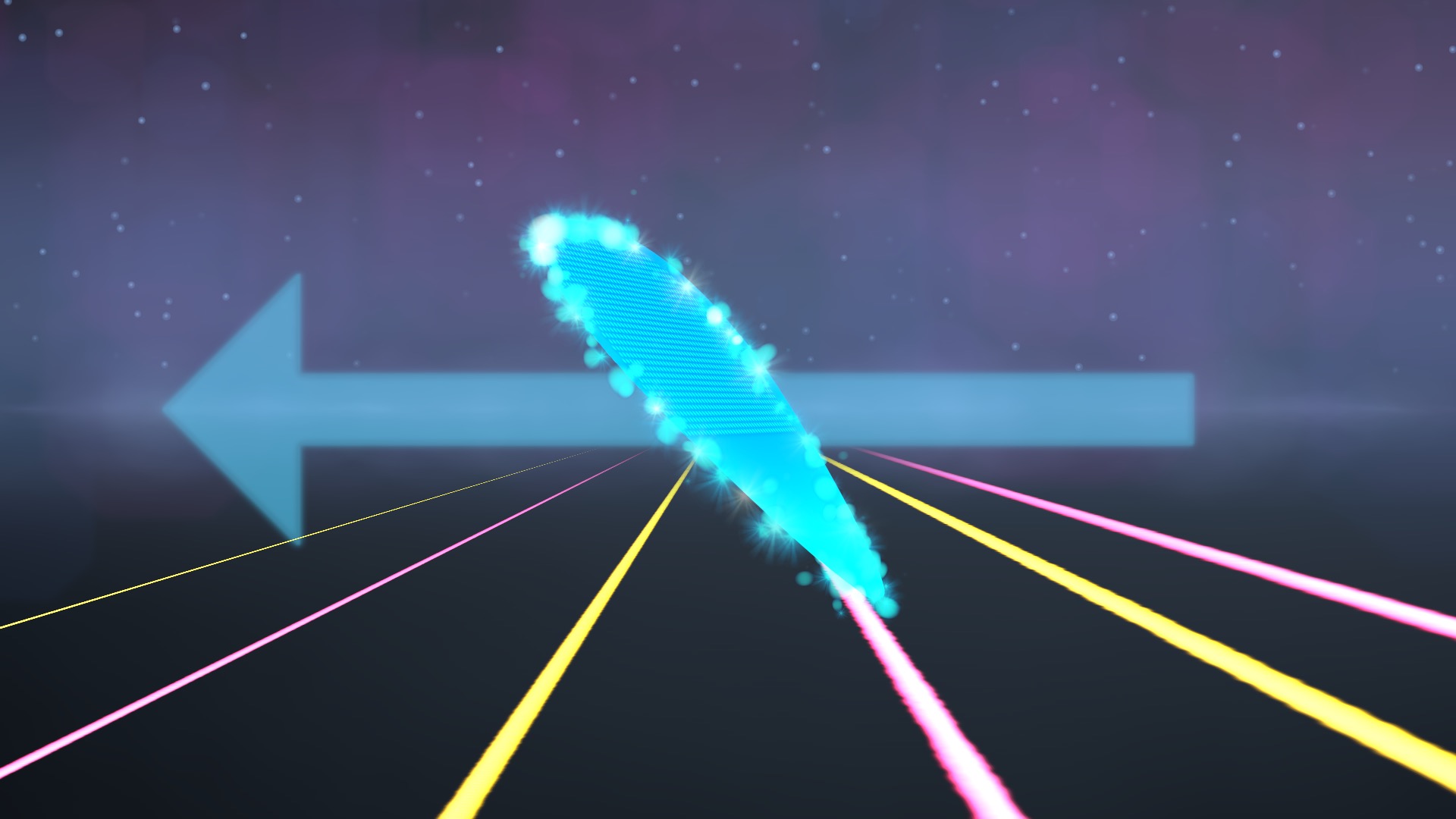 The reason this works is mechanically complex, and involves making sure all the “inside” string changes are effortless. But in actual practice, we can forget about the theory somewhat because doing it turns out to be pretty natural. If you think about the gentle directional slant that is present in most strumming movements, and also in sweep picking, this is the exact same thing. What’s amazing and unexpected here is that Morse is actually doing it during alternate picking, which is not something we’re used to thinking about.

So now we’ve got all three ingredients in our mixing bowl. We’ve established the swing, we’re tracking it across the strings, and we’re slanting the pick ever so slightly in the direction of our movement. And when we get the blend just right, cool things begin to happen: 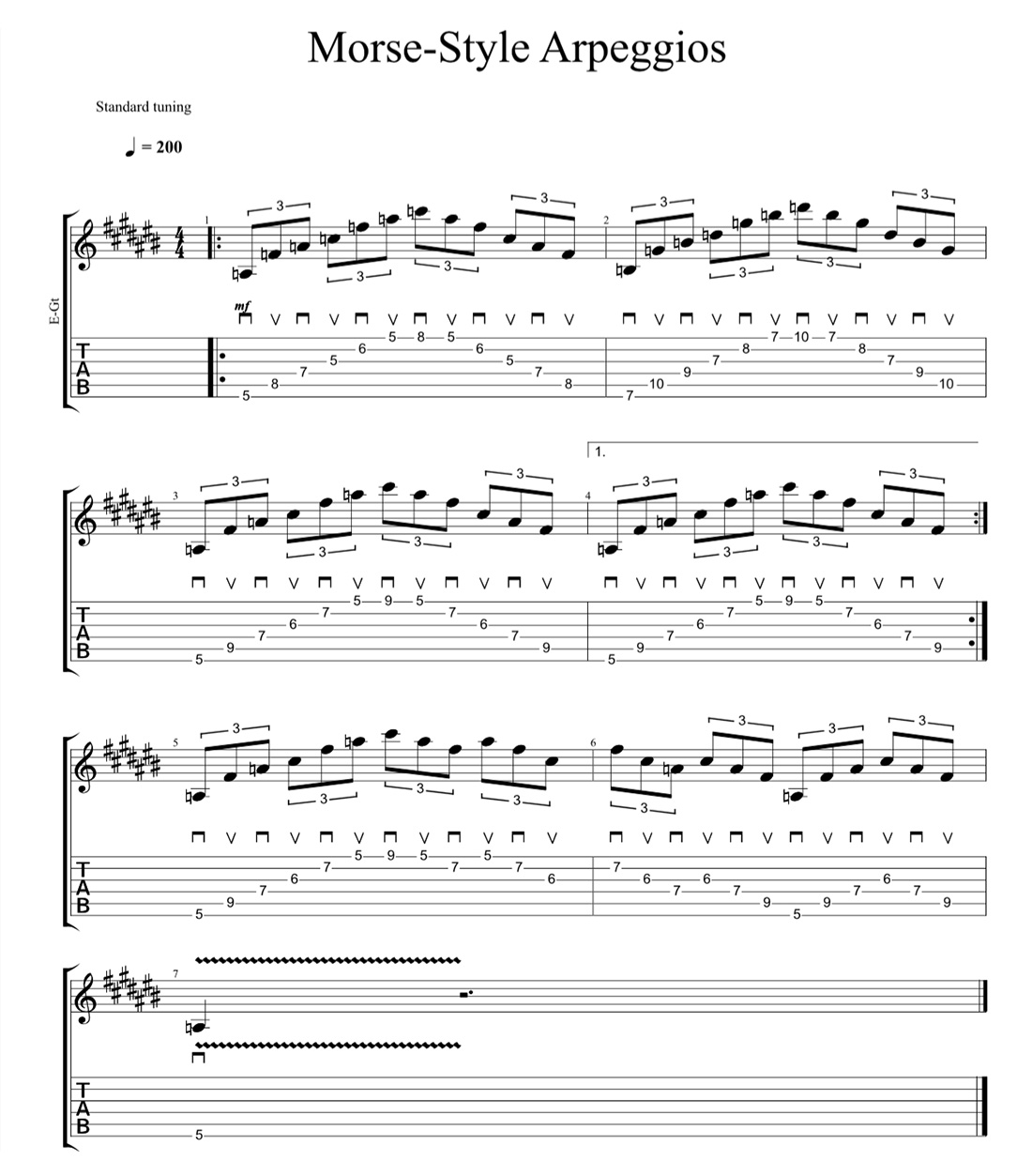 Rotation, string tracking, and pickslanting are an incredibly powerful mixture, and they aren’t just the three pillars of Morse’s arpeggio technique. It turns out that they are also the foundation of all single-note arpeggio picking. Because of this, you will also see them mixed together in varying amounts in other styles of music, like bluegrass, that rely on flatpicked arpeggios.

The incredible mechanical engineering of Morse’s technique is beautiful to look at under the camera, but it’s also a vastly powerful musical tool. Because of the tricky design of the guitar itself, players have historically had to make all sorts of compromises to create lines they could actually play. So if learning to navigate the strings the Morse way helps us generate musical ideas we might not have even considered possible, well that’s the greatest gift he could have given us.

Watch the complete Steve Morse interview in Masters in Mechanics, a monthly series that explores an array of fascinating topics at the intersection of mechanics and music.