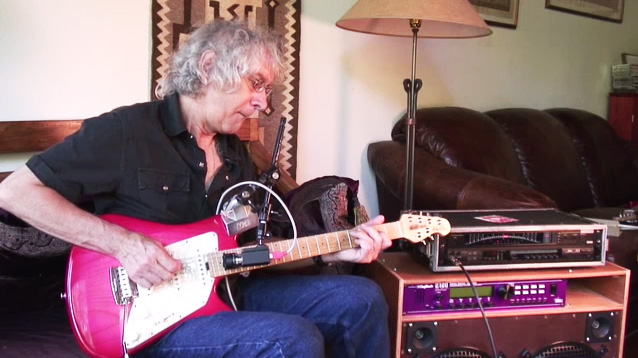 Anyone who thinks filming an indie documentary means sitting around coffeehouses in Greenpoint with your MacBook and a copy of Final Cut Pro has clearly never attempted to track down virtuoso guitarists in their natural habitats. While my sleep deficit suffered this month, my appreciation for American music, and my growing collection of frequent flyer miles, are the better for it. It’s fitting that filming the three country players in this month’s Code update also required me to see a lot more of it. The country, that is. So straighten your seat backs and return your tray tables to their upright position, we’re coming in for some hot country picking.

When country picking legend Albert Lee humbly asked me why I might be interested in filming him for a movie about shred guitar, I had to stop myself from answering “everything!” As you may have guessed from the Fun Ranch Boogie lesson elsewhere on this site, Albert’s playing was a huge influence on my own. In this respect however, I am hardly alone, as a large portion of the guitar firmament — everyone from Eric Clapton, to Eddie Van Halen, to Zakk Wylde, to John 5, and more — also counts Albert as a hero.

COUNTRY BOY: Albert Lee is one of Hogan’s Heroes, and a hero to many for his pioneering fusion of flat and hybrid picking.

That Albert’s fan base should be so diverse is fitting for a player who has spent a large portion of his career as a sideman. He was for many years the lead player in Emmy Lou Harris’ band, and still tours with former Rolling Stone Bill Wyman’s solo projects. What many don’t realize is that Albert was, for a brief moment in the early ’70s, a core member of a seminal country rock band of his own. That group, Head, Hands, and Feet, was kind of a countrified Doobie Brothers, the spiritual forbear of modern alt-country rockers like Uncle Tupelo and Wilco. HH&F’s ever-so-hillbilly take on ’70s rock was the perfect canvas for a player like Albert, who had been raised on Elvis and Chuck Berrry, but had taken a detour through rockabilly just as contemporaries like Beck and Clapton were discovering the blues.

Albert’s playing on signatures like Warming up the Band and Country Boy in the rare and fascinating YouTube concert footage clips linked above, illustrate that Albert’s formidable array of alternate picking, hybrid picking, and slick legato was already well in place by the time HH&F was breaking ground. Even more fascinating is the purely intuitive way in which this technique developed. As you’ll see in the Code, Albert is not a practiced player in the strict sense of the term. His famously effortless, weaving solo lines — locked firmly to the groove, and always deferential to the chord progression — are built on a largely automatic combination of pick motions honed through years of live gigs and improvisational playing. After several abortive attempts to break these down into components, I finally just decided to let him play. What emerges beneath the ShredCam is an exciting look at what happens when pure, physical intelligence is in the driver’s seat.

While all three players in this month’s Code update do live in the States, only one is actually an American. And the flavors of Americana that emanate from Scotty Anderson‘s Telecaster are numerous. There is the inevitable Chet Atkins influence, a given for pretty much any roots player who works with a combination of thumb pick and fingers. But despite his renown in rockabilly and western swing circles, these days Scotty can more often than not found applying his humbling command of the fretboard to jazz. 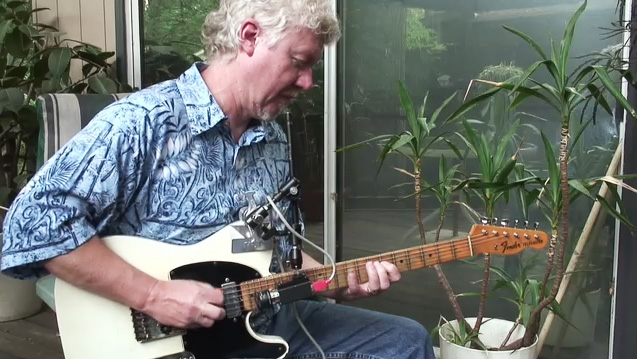 I caught up with Scotty at Bert Elliott Sound in Atlanta during the tracking of Scotty’s upcoming disc, a collection of jazz standards which Scotty wastes no time infusing with his incredible melodic virtuosity. In the attached clip, Scotty completely manhandles the challenging uptempo Count Basie standard Jumpin’ At The Woodside. On the tune’s head, Scotty uses his mind-boggling double-stop technique to play alternate-picked, string-skipping, harmonized octaves on the same guitar. Then, with his left foot a relentless metronome, Scotty lays down a scorching solo that simultaneously channels Tal Farlow and Danny Gatton.

The weapon of choice in this and all Scotty’s playing is a medium-gauge thumb pick, shaved on either side for greater flexibility, which he uses for both finger and flat-picked lines. While there is a general formula at work in the way Scotty switches between flat and finger picking, in practice these blend so seamlessly as to be indistinguishable. It’s only when we take a closer look with the high-speed camera that the connection between the two techniques becomes apparent.

But even more impressive than Scotty’s mechanical dexterity at elevated tempos is simply his masterful command of jazz harmony. At one point in the session, after a devastatingly clever open string lick over an altered chord in a solo take on a slower tune, one of the two bass players on the date stabbed an imaginary dagger into his own neck in mock immolation as the entourage — myself included — watched in agape wonderment.

Tommy Can You Hear Me?

Probably not. At a typical Tommy Emmanuel show, your own cheering voice will be but one of a chorus of ecstatic fans. And that’s even if you can be heard above the thunderous onslaught of Tommy’s guitar. Tommy’s “acoustic” instrument produces more full-spectrum sonic assault than many rock bands, modulating from a whisper to a boom with one mighty slap of this hybrid picking master’s talented hand, and generating volume spikes upwards of 60db in the process. Such was the case at the high-octane show I filmed for the Code, wherein the right PA bass cabinet actually flew the coop during a particularly thrilling performance of Tommy’s impressionistic head trip, Initiation. According to Tommy’s engineer, Tommy hates compression and always objects if it’s being applied. Stage managers, let that be a lesson to ye — lock up your power amps, Tommy Emmanuel’s coming to town. 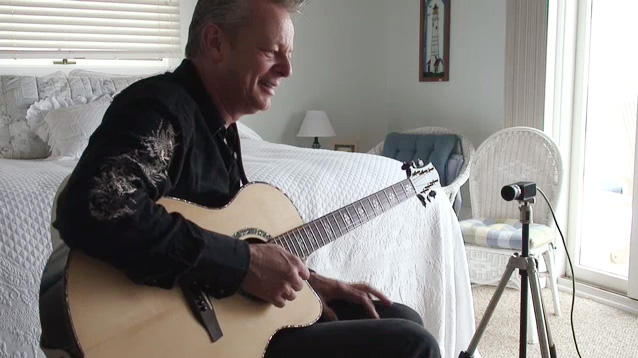 ATKINS DIET: At a Tommy Emmanuel show, fingerpicking virtuosity is only one of the many enticing items on the menu. Tommy is a master of both thumb and flatpicking styles, and a world-class performer.

While Tommy’s flawless thumb pick technique is without a doubt deserving of the Certified Guitar Player honor bestowed upon him by good friend and hero Chet Atkins, his uncommon command of the flat pick may surprise you. Tunes like Sugar Foot Rag, which he originally played with his preternaturally talented brother Phil, showcase his command of multi-string alternate picking, involving unusual combinations of pickstrokes and string changes that would flummox most players. The unrelenting bluegrass barn burner Tall Fiddler, a staple of his live show, features a blistering sweep phrase in the head. Indeed, Tommy’s fiery playing style and exuberant stage presence owe more in spirit to the irreverent virtuosity of plectrum-based players like Jimi Hendrix and Eddie Van Halen. When I told him I was taking notes at the show, he shook his head and said “You should have been enjoying yourself!”

Of course, I was.