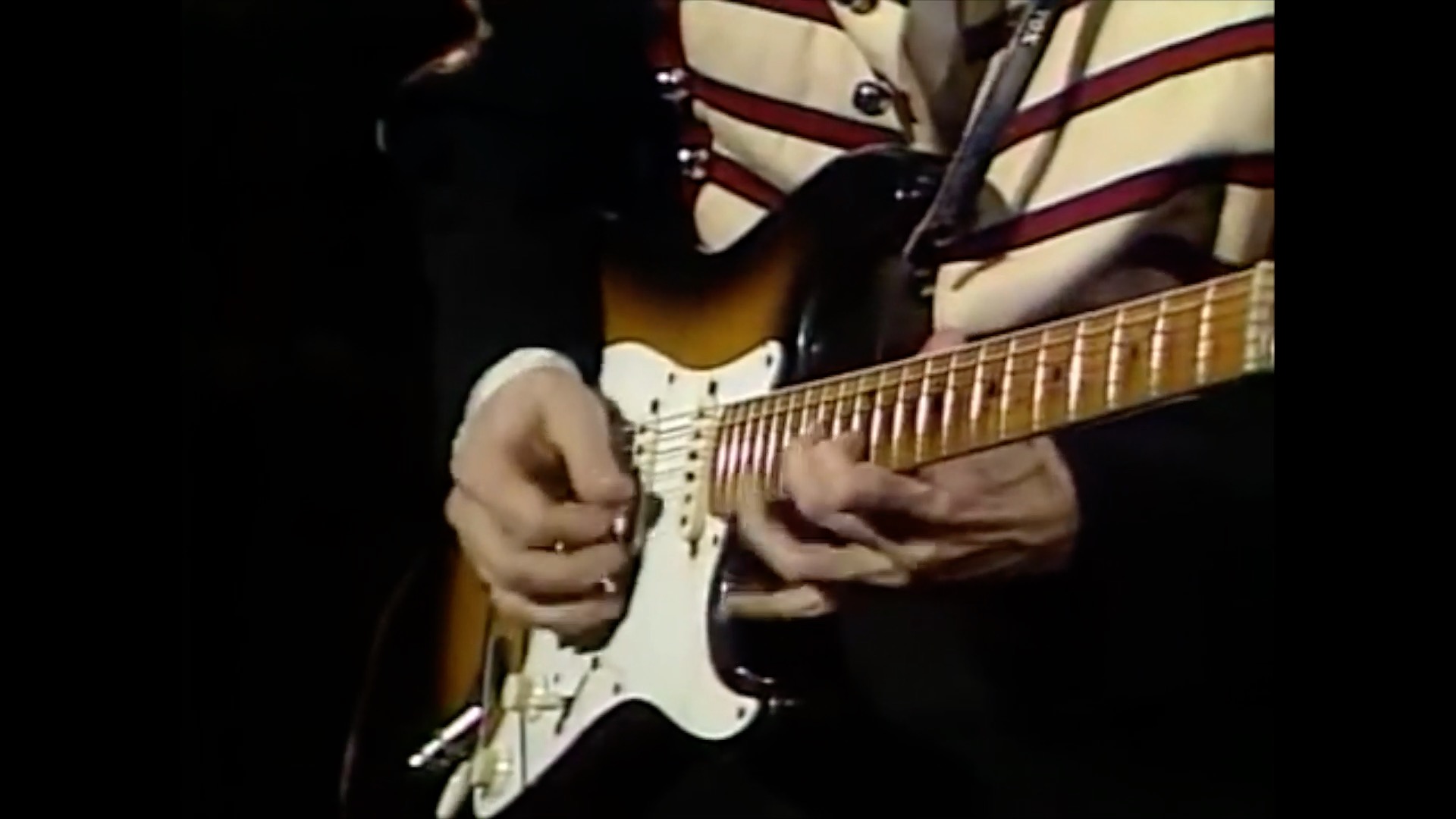 Sometimes, picking patterns exist in a player’s vocabulary not specifically because they are necessary in a given situation, but because they were originally necessary somewhere else. And to find out what the situation was that may have originally required this particular combination of picking and legato, we need to look on a whole different string:

Now this makes more sense. Here’s an interesting phrase that recurs frequently in Eric’s box-position soloing that allows him to quickly reverse the melodic flow of lick by using a pulloff. In this instance, the pulloff is necessary because the number of notes on the B string requires it. Starting on a downstroke, and using pure alternate picking to play five notes on the B string would of course terminate on a downstroke. And that’s no good if we’re a downward pickslanter. But a single pulloff fixes all that, forcing the last pickstroke to be an upstroke, creating a solution that works in all cases.

And it also seems somewhat… familiar. Where have we seen this technique of forcing upstrokes with legato before? Of course. We may not be playing the harmonic minor scale, here but the concept is identical. Yngwie uses strategic pulloffs in descending 3nps scale runs to force upstrokes on strings that would otherwise have three picked notes. Eric is simply doing it here with five notes on a string.

So the “escape hatch” sequence we’ve come to understand in Yngwie’s playing — down, up, pulloff — turns out to be instrumental in several cases within Eric’s vocabulary as well. In fact, going one step further, it’s not even really an Yngwie or an Eric thing: it’s a downward pickslanting thing. In any primarily one-way downward pickslanting style dependent on upstroke string switching, we are very likely to also see the use of pulloffs to force upstrokes, as a way of expanding the variety of fast string changes that are possible. And very often, those pulloffs will occur at the end of three-note sequences that start on downstrokes.

In fact, given its fundamental role in one-way dwps strategies, it’s worth turning this concept into a bit of an Eric-sounding exercise by repeating it across the strings the same way we did with the fives lick: