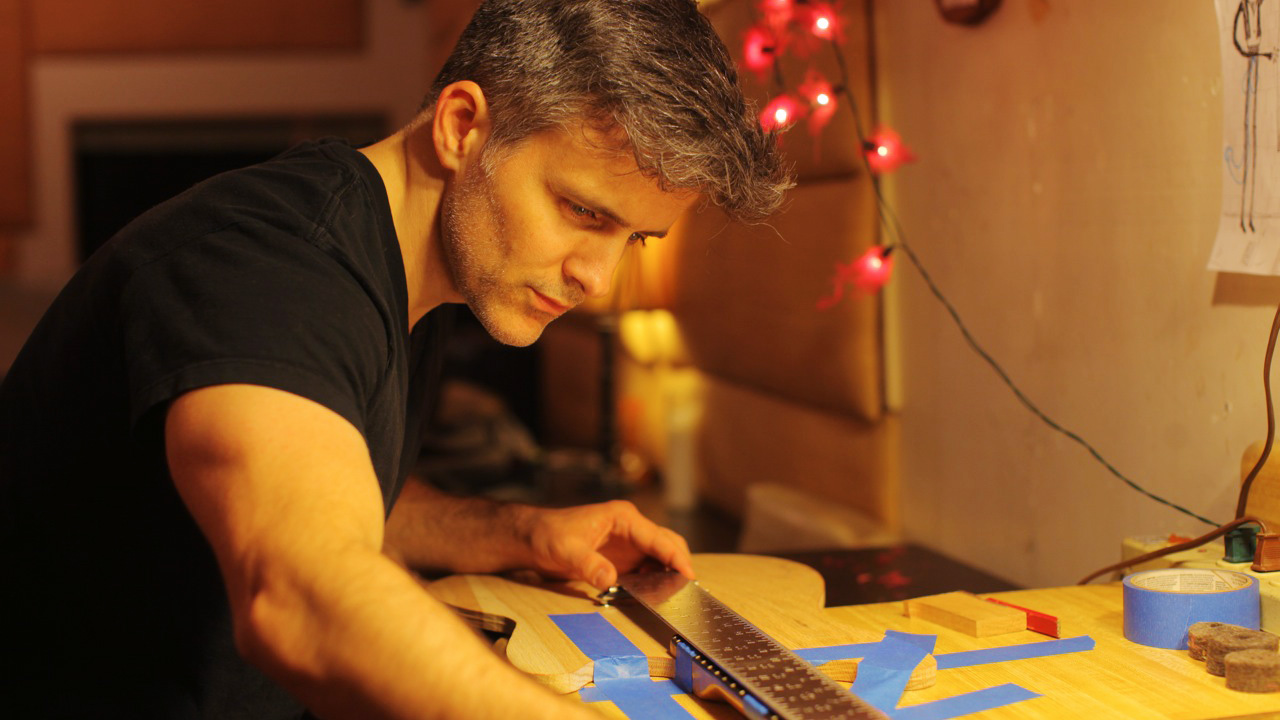 I sold mens suits in high school. Compared to the stockroom at the dollar store, the clothing business offered a far lower risk of maiming my fretting hand with a box cutter, and of course, took place at the very location I’d likely end up anyway: the mall. It was a suburban sinecure of the highest order, offering fringe benefits like girl-watching and free tailoring, while simultaneously conferring valuable life skills. Full Windsor knot anyone? To this day, I can still spot a neck size from twenty paces.

Navigating rack after overflowing rack of 40 regular sport coats also inculcated a basic truth of modern consumerism: sometimes, it’s best to be average. For example, were Angus Young to step into my store, maybe on a layover after rocking the Nassau Coliseum, I’d escort him straight away to the 36 extra-short rack. There, he would find a grand selection of one item: a burgundy leisure suit with a chest-to-waist size differential — called a drop, in industry parlance — of precisely two inches. What this meant was two things. One, as far as the fashion industry was concerned, smaller men didn’t exist. And two, if they did, they were likely to be round, with bellies as large as their pecs. And the only thing round about Angus, in his slim-fitting naughty schoolboy attire, was his beefy tone. 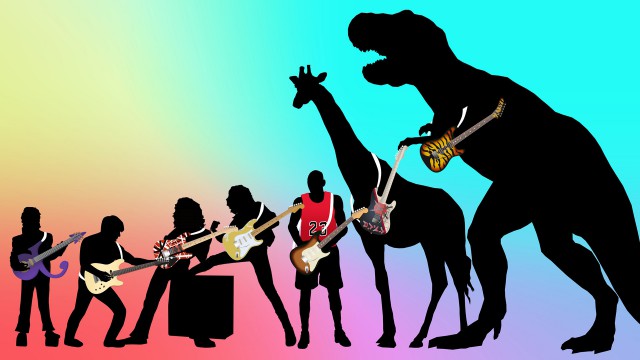 STRATOSAURUS REX: Even a 20-foot theropod would be stuck with a standard-sized guitar.

Fast-forward twenty five years. I’m an Angus-sized player with a Zakk Wylde-sized guitar. And while I appreciate the sonic rotundity for which the Les Paul is famous, its boaty body only amplifies the feeling that I’m playing someone else’s signature instrument. Indeed, it turns out that just like the fashion industry, the electric guitar is woefully under-represented in body sizes. Smaller guitars are produced as gimmicks, or for very young children. And a pitifully infantilizing selection of (invariably) pink instruments is marketed to girls.

This is notably not the case in other areas of musical instrument manufacture. Orchestral stringed instruments like violin and viola have long been produced in a comparatively staggering array of fractional sizes. Liliputian scales like 1/8 are available for young children, all the way up to full-sized “4/4”-sized instruments for older kids and adults. 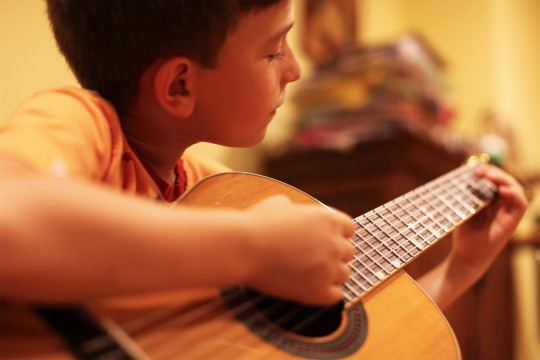 STAR OF A REASONABLY PRICED GUITAR: Max and his Antonio Hermosa AHQ-10

A similar variety exists in acoustic guitars. A friend’s son was recently issued a 3/4-size nylon string in an elementary school guitar instruction program. Contrary to the “student instrument” connotation, the fit, finish and playability on this guitar — an Antonio Hermosa AHQ-10 — was impressive. One friend called it “the best ‘first guitar’ ever”. Played with a pick, the slightly slack nylon strings on this comfortably small instrument immediately invoked “Spanish Fly” and “Little Guitars”. Fingerstyle, or simply with a less aggressive pick attack, the guitar’s warm sound was fantastic for acoustic jazz.

Surprisingly, this lack of morphological diversity wasn’t always the case in electric guitars either. In the ’60s, Fender produced a range of smaller-sized guitars marketed to students, like the Duo-Sonic, with its 22.5″ scale length. Many original Duo-Sonics are still in service, and the best are now collectors’ items fetching into the mid-single-digit thousands. 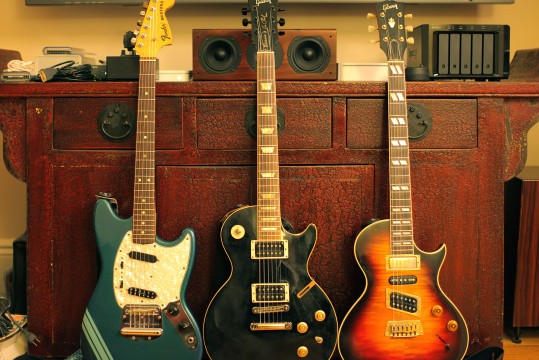 A STUDY IN CONTOURS: The stretch of the Mustang, the squash of the Nighthawk, and the general rotundity of the Les Paul.

The Duo-Sonic’s upmarket cousin, the Mustang, was already a smaller instrument. Its 24-inch scale was well below both Fender’s standard of 25.5″, and the 24.75″ scale of the Les Paul. On top of this, the Mustang was further offered in a student scale of 22.5″ — matching the Duo-Sonic, but at a higher trim level with more pickups and controls.

But by the early ’90s, after a decade’s onslaught of pointy headstocks, Fender’s extensive catalog of vintage designs could often be sourced for pennies in pawn shops. When penurious punks in the burgeoning grunge scene became overnight rock stars, so did their instruments. By the time The Crow was released in 1994, the film’s warehouse rave scene is hilariously an all-Mustang lineup.

Of course I had known about the Mustang, thanks to Kurt Cobain. But the guitar’s slightly smushed vertical dimension is a kind of optical illusion, conferring a larger-than-reality appearance in videos like “Smells Like Teen Spirit”. It wasn’t until I scored a lightly modified 1971 blue competition-stripe Mustang off Craigslist that I realized how diminutive it really is.

At 1.5″ thick, the Mustang’s body is a quarter inch thinner than the Stratocaster, and a veritable wafer when compared to the thickest parts of the Les Paul’s carved-top mountain. The lower bout on the ‘Stang measures about 12 inches, which by itself is only about an inch or so narrower than the Paul. But without the massive sweep of the Paul’s curved booty, and with the classic Fender forearm and belly cuts, the Mustang’s slimmer contours make it effortlessly comfortable to wear. 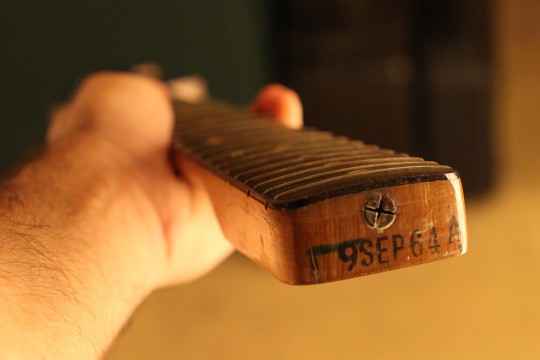 HOT TONE TIME MACHINE: This vintage 1964 Fender Mustang 22.5″ “A-profile” student-scale neck was made nearly a decade before I was.

The Mustang’s chimey chords telegraph its Fender lineage clearly. And while I love those sounds — as well as the vintage race-car inspired livery — they are not what I reach for when it comes to chunky low-string riffing. What I was really after was turning out to be a study in antagonism: Small body, big presence. Comfy contours, giant tone. Classic sound, bespoke dimensions. What I needed was custom tailoring with musical materials.

I found a vintage 1964 Mustang 22.5″ student-scale neck on eBay. I ordered a two-inch slab of Mahogany from Stew Mac. I belt-sanded a Home Depot carpentry pencil totally flat on one side.

The Much-Stang project was born.