Behind the Scenes: Envisioning the Arpeggio Mystery 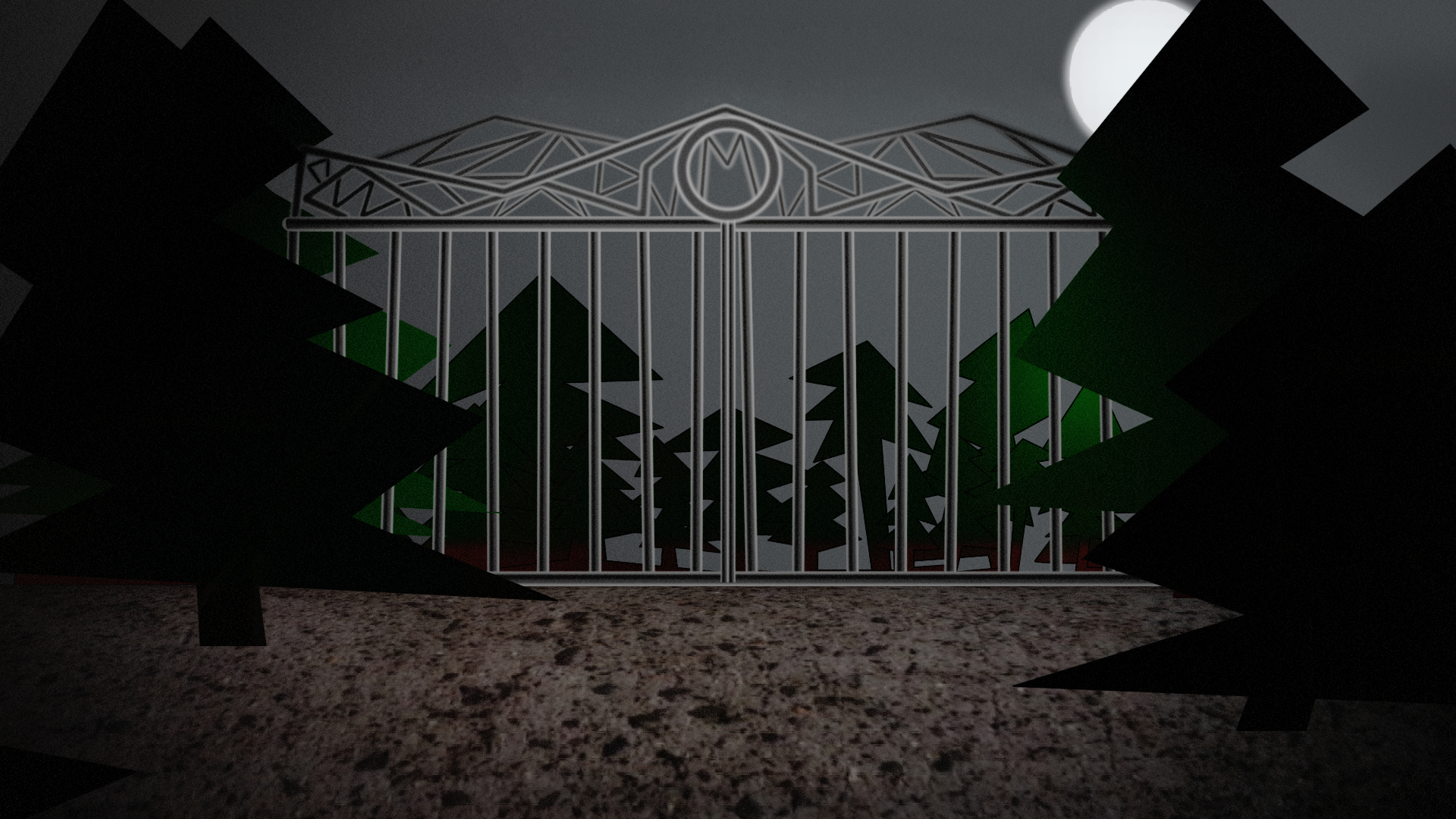 In the Arpeggio Mystery, we explore the difficulties a person is likely to encounter reverse engineering Yngwie Malmsteen’s arpeggio-based solos in a world populated by jagged trees, wolves shrouded in fog and shadows, and a circus full of little moving angular pick people. It’s a scene that’s become a favorite of mine, but it didn’t just form out of the ether. A lot of consideration went into the conceptualization of this world, and a lot of work went into its execution, so how did we go about making it? And where did the inspiration for the scene come from?

When I was 14, my Mom moved the two of us from the far off suburbs of LA to LA proper leaving all my friends behind. It made sense. She worked out there, I started going to a fancy private school out there, so the next step was to move out there. Unfortunately as a result, I didn’t know anyone outside of school, and I wasn’t exactly winning popularity contests in school, so for the following summer the company I kept was—as Homer Simpson coined it—my teacher, mother, secret lover: the television. A fortuitous encounter with an American Film Institute special encouraged me to hunt for VHS tapes at the local Blockbuster several times a week, and a elitist film nerd was born. I binged on Casablanca and Citizen Kane, Scorsese and Kubrick, Silent and Sepia, essentially anything upon which time had bestowed the moniker “Classic”. And somewhere down the line, Roger Ebert had pointed me toward a little film called Nosferatu. I may not have fully appreciated it as a teenager, but an indelible imprint had been made by the film’s haunting tone and striking visuals. It was my first encounter with German Expressionism. 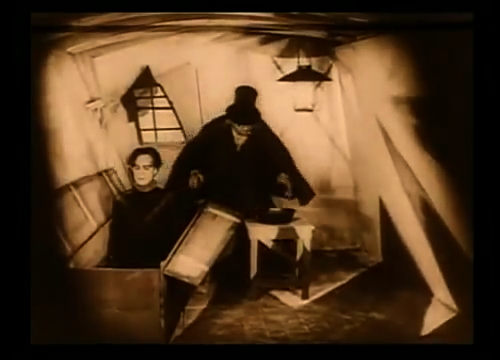 German Expressionism made its way to film in the early 1920s. In the post-WWI era, national cinemas needed to fulfill certain niches in order to be recognized in the suddenly international film industry. Bold artistic styles were needed to stand apart from other nations. The French had Impressionism. The Soviets had collage editing practices. But it was Germany that had the greatest impact with Expressionism, as evidenced by the next few decades of Hollywood that would be dominated by directors exiled from Germany, including Fritz Lang, F. W. Murnau, Erich von Stroheim, and Billy Wilder. Fundamentally Expressionist films warp the mise en scène, or all aspects of the visual design, to fit the psychological perspective of the main characters. German films often deal with themes of insanity and the bounds of a human’s humanity; thus, German Expressionist films are extremely stylized. Sets are painted with jagged shadows, men and women are made up to look hardly human, and the architecture often looks lopsided to the point of near collapse.

There’s No I in Theme

Upon joining Cracking the Code, I used this lack-of-popularity induced film expertise in several of my animations. We name drop Pulp Fiction, 2001: A Space Odyssey, and Goodfellas on a regular basis as we discuss how best to translate something as non-visual as guitar technique into something audiences would enjoy watching. The best classrooms I’d ever been in did more than just teach me. They enthralled me and entertained me, and in the grand scheme of things we hope that Cracking the Code will do the same thing for our audience. As we conceptualized the Arpeggio Mystery, we knew we wanted something engaging, and we knew that we wanted something visually arresting. Our subject matter focused on the difficulty in deducing where Yngwie Malmsteen played his solos on the guitar, an undeniably complex instrument. It became only natural to see Yngwie as a powerful but mysterious figure with some code that we just couldn’t crack. This scene felt like the perfect time to incorporate the imagery of the enigma machine, a device that encrypted messages in World War II that would eventually be cracked by Alan Turing. Given the title of our show, it was only a matter of time before a cryptological tool actually made an appearance, and given the mysterious nature of this scene, we committed to using it here. 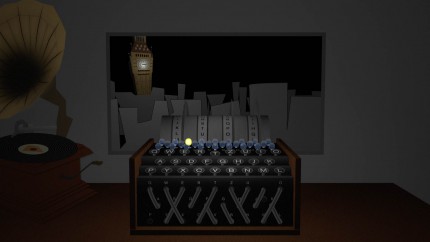 This rolling drum also got the ball rolling on our scene development process. The enigma machine was a catalyst each subsequent idea as we conceptualized the Arpeggio Mystery.

With that image settled upon, we built on the theme. We wanted the enigma machine to be present the whole time, but only revealed at the end, sort of like the man behind the curtain in the Wizard of Oz, hence it would need to be disguised. At that point, I decided to have the whole world rotate on a large drum that would eventually be revealed as an enigma machine, making the device the literal and figurative foundation for the scene. It also had the potential to be a visually captivating idea, so again we committed.

Having decided upon this drum and the enigma machine reveal, we extrapolated the rest of the scene from there. By restricting ourselves to this specific idea, the other elements of the scene fell out like inspiration dominos. The drum led to the idea of an organ grinder, which in turn gave us an idea for an amalgam of circus music and turn-of-the-century European dance music. That music informed which era and which continent the scene would be taking place in, which inspired us to incorporate a Sherlock Holmes homage. Based on this one idea, five other ideas were born; then those ideas had their own idea babies, and an entire idea family tree began to take root. But stylistically we needed to bridge these elements–Sherlock Holmes, circus, London, European music, WWII, this drum, etc.–and create a cohesive world. My nerdy senses started tingling. Finally, we came across the perfect opportunity to utilize one of the most exciting art styles I’d come across in that summer way back when. Expressionism was tapping at our chamber door, and I had to answer.

Frankly this drum, to which we had committed ourselves, was arguably the most expressionistic element in the scene. Although it certainly doesn’t convey that sense of darkness associated with German Expressionism, its endless rotation is highly symbolic, conveying both the scene’s sense of musicality and its sense of futility. At the end of the day, the drum fulfills that core concept behind Expressionism: it abstractly maps the psychological perspective of Troy, a befuddled kid that keeps plugging away to no end trying to figure out Yngwie’s secrets, to something visual.

The pieces were coming together, but we still had another mystery to solve. How on Earth do we make that oh so essential drum? Apple Motion is the best $50 you can spend for someone interested in motion graphics, but motion graphics have their limitations. It’s a medium of flat surfaces, so if you want to produce a cube then you need to arrange all six faces—and if you want to produce a sphere, then you best look elsewhere. The marriage vows to this drum had already been written, and turning our back on her was not an option, so we would need to use some clever tricks to manipulate Motion into making 3D curved objects. 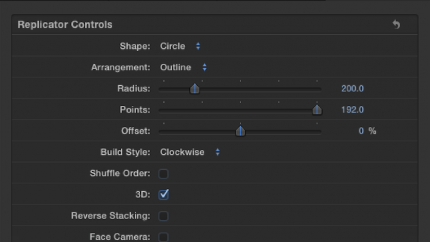 The little checkbox that could, the 3D parameter, allows for the creation of complex multi-dimensional shapes in an otherwise 2D world.

In this article’s accompanying video, we touch on lighting, emitters, and character rigging, and right at the end we walk through the secret behind making cylinders: calculus. A series of thin rectangles can begin to approximate the area under a curve. The more thin rectangles we have then the more accurate the approximation. In calculus, we’d ask what the approximation would be as the rectangles get infinitesimally thin, but luckily for our purposes that’s unnecessarily extreme. When we draw a tall, reasonably thin rectangle and use that as the cell source for a replicator—with the shape: circle, the 3D parameter checked on, the align angle parameter checked on, and the X parameter of the cell angle turned to 90°—the resulting cylinder will begin to look smooth. We need to adjust the radius and the number of points until the edge of each slice lines up (although for this project we’ll wind up needing 192 points. It’ll make sense later, I promise.). We could also adjust the cell’s scale parameter to fill these gaps if needed. 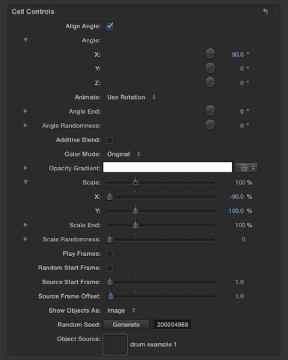 The source frame offset parameter puts the cherry on the top of an animator’s ice cream sundae. It allows each frame of the video to occupy an adjacent slice of the replicator, making for a smooth texture.

The video also quickly walks through the process of adding a video as a source for the replicator. The source video for the replicator needs to be the correct dimensions to work properly. We typically work in HD, or a 1920 by 1080 aspect ratio, and a texture at that resolution should be detailed enough for our purposes. I made cartoony ground textures for the cobblestone and the dirt–both at 1920 by 1080 resolutions–and exported them as pngs. Then, in order to make the video source, I made a workspace that was only 10 by 1080. I pushed the png texture to the right of the frame at (x,y: 955,0), and I set a keyframe at frame 1. The entire texture should move across the 10 pixel-wide workspace, so we set another keyframe (x,y: -955,0) at frame 192 with a linear keyframe curve. Because we’re moving a 1920 pixel wide texture across a 10 pixels wide workspace, the animation takes exactly 192 frames to cover each part of the texture with no redundancy. This way if we took each frame of the video and arranged them next to each other, we’d have our complete texture back. If we had more than 192 frames, there’d be too much overlap and the recreated texture would look strangely jagged. If we had fewer than 192 frames, there’d be portions of the texture missing. With the perfect duration determined, we render this animation out as a 192 frame long movie with each subsequent frame containing a distinct strip of the texture, and then we add that movie into our cylinder project.

With the texture movie as the cell source for our cylinder, we checked off the play frames parameter, and set the Source Frame Offset to one so each adjacent slice would be a subsequent frame of the video, resulting in our texture mapped onto a cylinder. Finally I inverted the cell scale’s x parameter to its negative equivalent. This is simply because I had erred when I decided to have the source video move from the right to the left of the workspace. That turned out to be backwards, but the fix was simple so the mistake proved pretty inconsequential.

And there we have it! A big rotating drum, full of blood, sweat, tears, and symbolism. The project was a bit of a milestone for me as an animator from both a technical and an artistic standpoint, so I hope it brought a smile to your spouse, parent, or child’s face as they passed by the computer screen and stated, “oh aren’t those little pick people cute”.