Shawn Lane: So What? 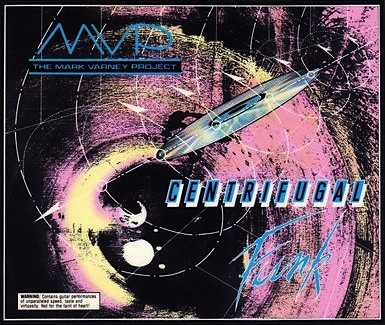 Centrifugal Funk was supposed to be just another one of those guitar compilations.  Released by shred pornographer Mark Varney in 1991, it featured a trio of hired guns laying down silicone-enhanced solos over processed covers of trad jazz tunes.  This was the era of Nirvana and Pantera, and the infomercially polished karaoke numbers on the disc were already dead on arrival.   But the formidable talents of the help bordered on necromancy.

The sorcerers in question were Frank Gambale, Brett Garsed, and Shawn Lane. Frank’s stature as a fusion soloist was and is well known, and despite his brief tenure in Nelson, so was Brett Garsed’s. Shawn Lane on the other hand was a relative unknown, this being a year before his seminal solo album Powers of Ten was released. All three turned in blistering performances on short notice, and in the process turned Centrifugal Funk from a corpse into a vampire.

Despite his performance on Centrifugal, the success of Powers of Ten, and a pair of top-selling instructional videos, Shawn’s increasingly obscure musical explorations and imminent physical decline ultimately sealed his fate as a player more influential than famous. Ironically, this leaves the blatantly cheesy Centrifugal Funk among the more influential examples of his output.

I understand that Shawn didn’t particularly enjoy the Centrifugal sessions nor favor their endproduct. And if he considered Powers of Ten the true expression of his art, then it’s easy to see why — the songs on that disc were, for lack of a better word, much more composed than his unrestrained shredding on Centrifugal. All the more reason, then, to marvel at the melodic forethought and supreme rhythmic awareness he exudes amidst the athleticism. Hey Tee Bone and Splatch are the most physical of those efforts, but they ramble. If you’re interested in seeing how much weight the man could bench, check out those tunes first. But a more satisfying testament to Shawn’s simultaneously muscular and musical mastery, and the one I’ve chosen for the lesson, is his solo on the Miles Davis cover So What.

I don’t know if Shawn was given time to review the song structure before the record button was pressed, and I don’t know if this was the first take or the tenth. The progression from A dorian to Bb dorian is transposed from the D dorian – Eb dorian of the Davis original — or perhaps intentionally modulated, since D dorian is relative to A natural minor anyway — but the unusual 32-bar structure remains intact and is widely covered in jazz circles. In any event, the abundance of signature Lane licks on So What suggests that it was mostly improvised. Despite this, the solo displays an engaging and intelligent dramatic flow. It begins with a legato scalar salute, and hustles through a series of licks which are by turns searing and space-age. Along the way, Shawn’s anticipation of the song’s occasional modulation is preternatural, frequently occuring at top speed and mid-sentence. In addition, the greasy blues riffing on this song is hermetically tight, and totally original. If you feel as though you’ve exhausted, or god forbid mastered, that humble box-position scale, Shawn’s creativity here will remind you that five tones are only two fewer than seven.

From a technical perspective, the So What solo includes archetypal examples of techniques that only Shawn used. Although much of Shawn’s playing on Centrifugal Funk is so fast as to be sonically indecipherable, when the licks are broken down, we discover the freakish cleanliness with which he executed his vast repertoire of legato, picked, and chicken-picked stunners.

All of this makes So What a superb vehicle for an excursion into the fascinating world of the enigmatic child prodigy. The accompanying tab is perhaps most interesting from sections 15 through 22. This physically unrelenting passage was transcribed with painstaking care using multiple audio and video references. Be sure and pay close attention to the pick instructions indicated below the staff (“u” for up, and “d” for down), as many of these phrases can only be reproduced confidently exactly as notated. 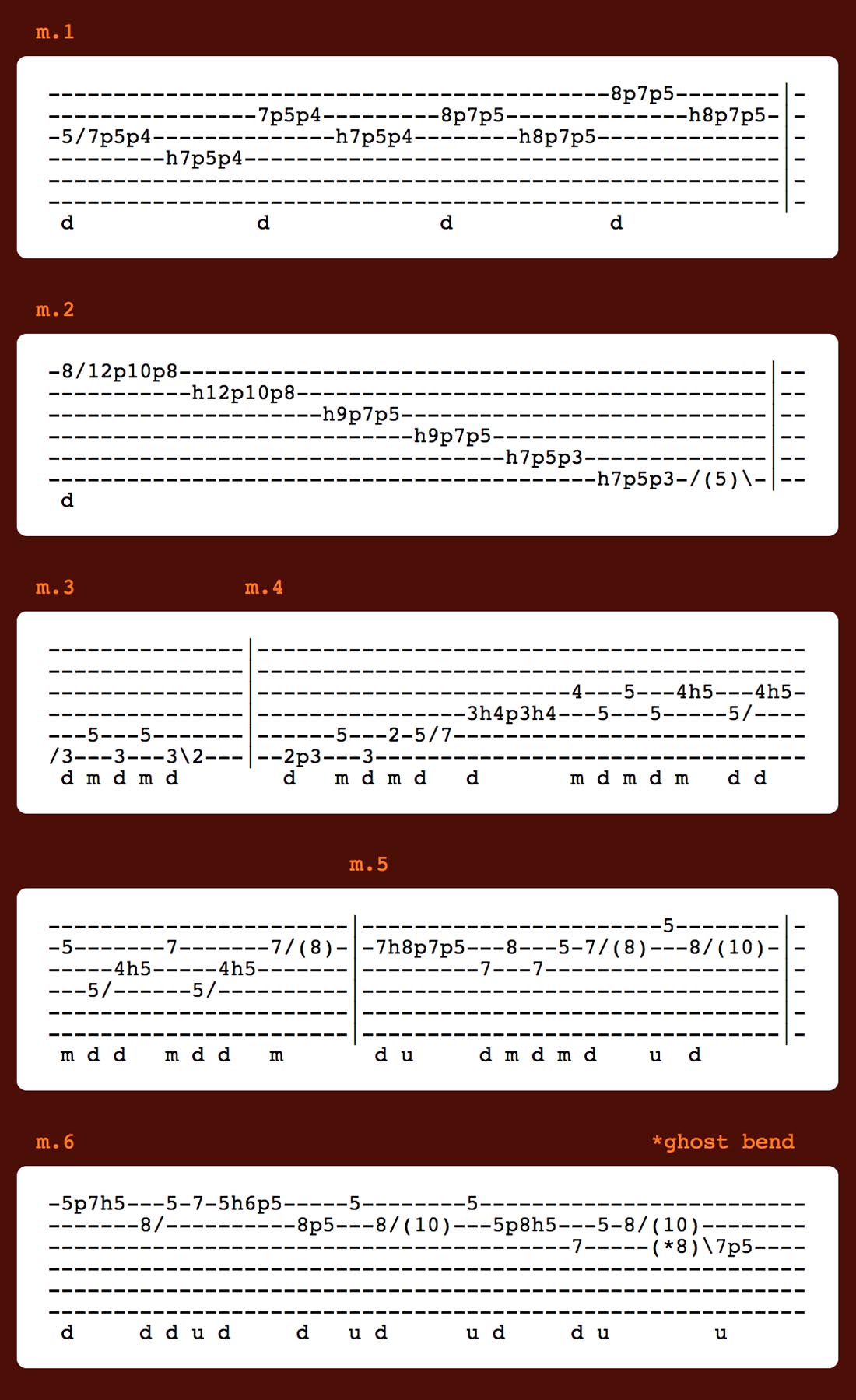 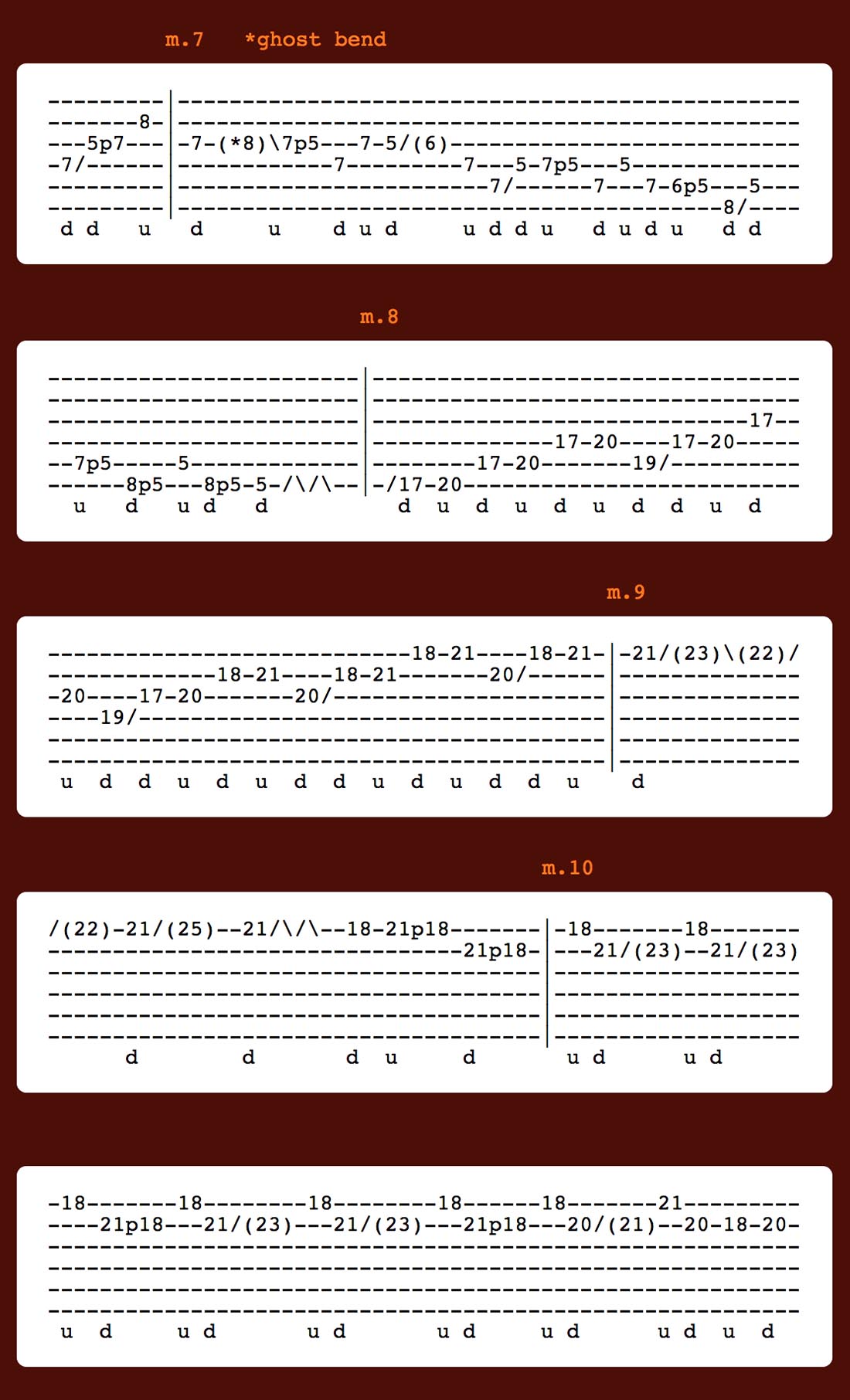 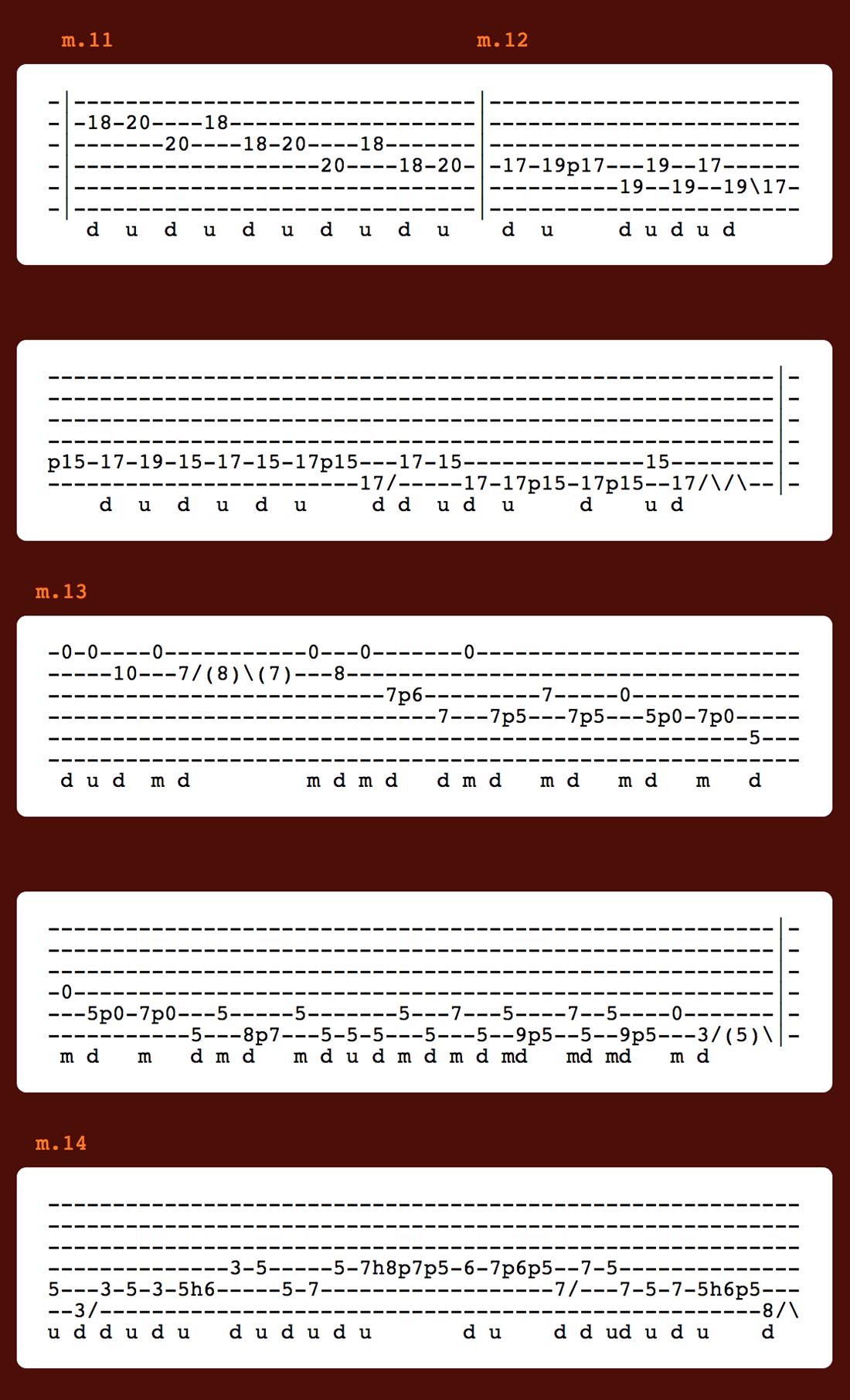 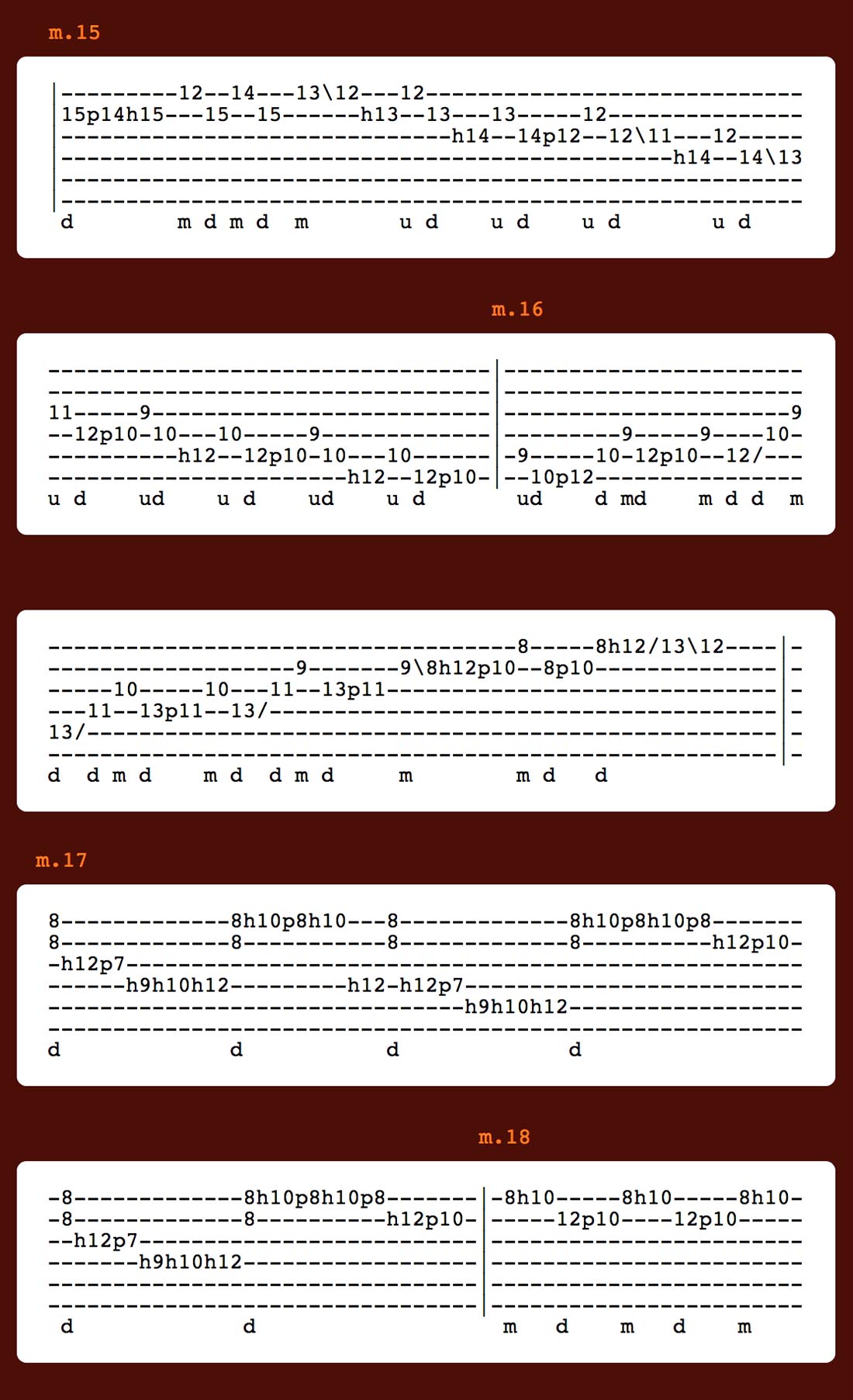 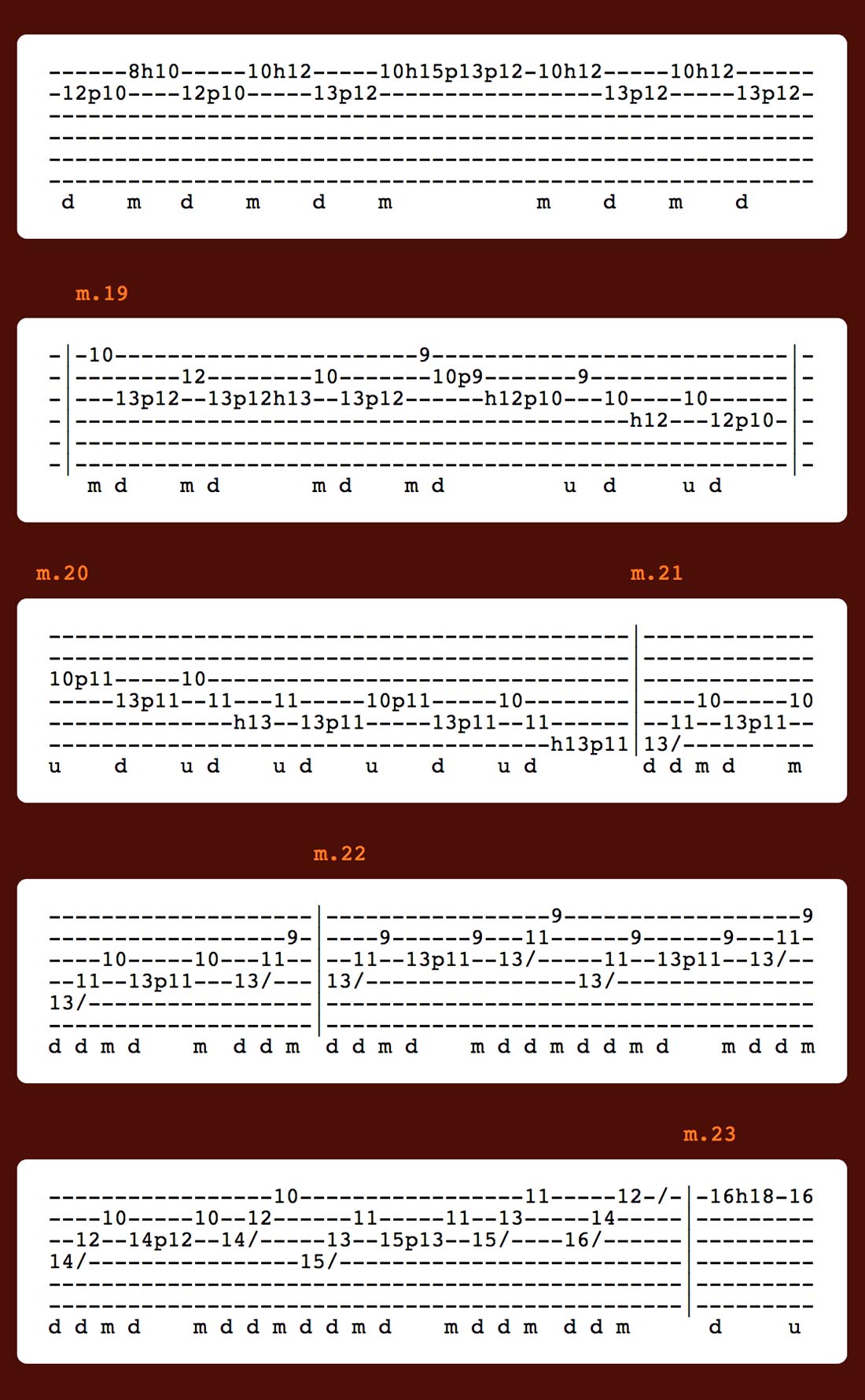 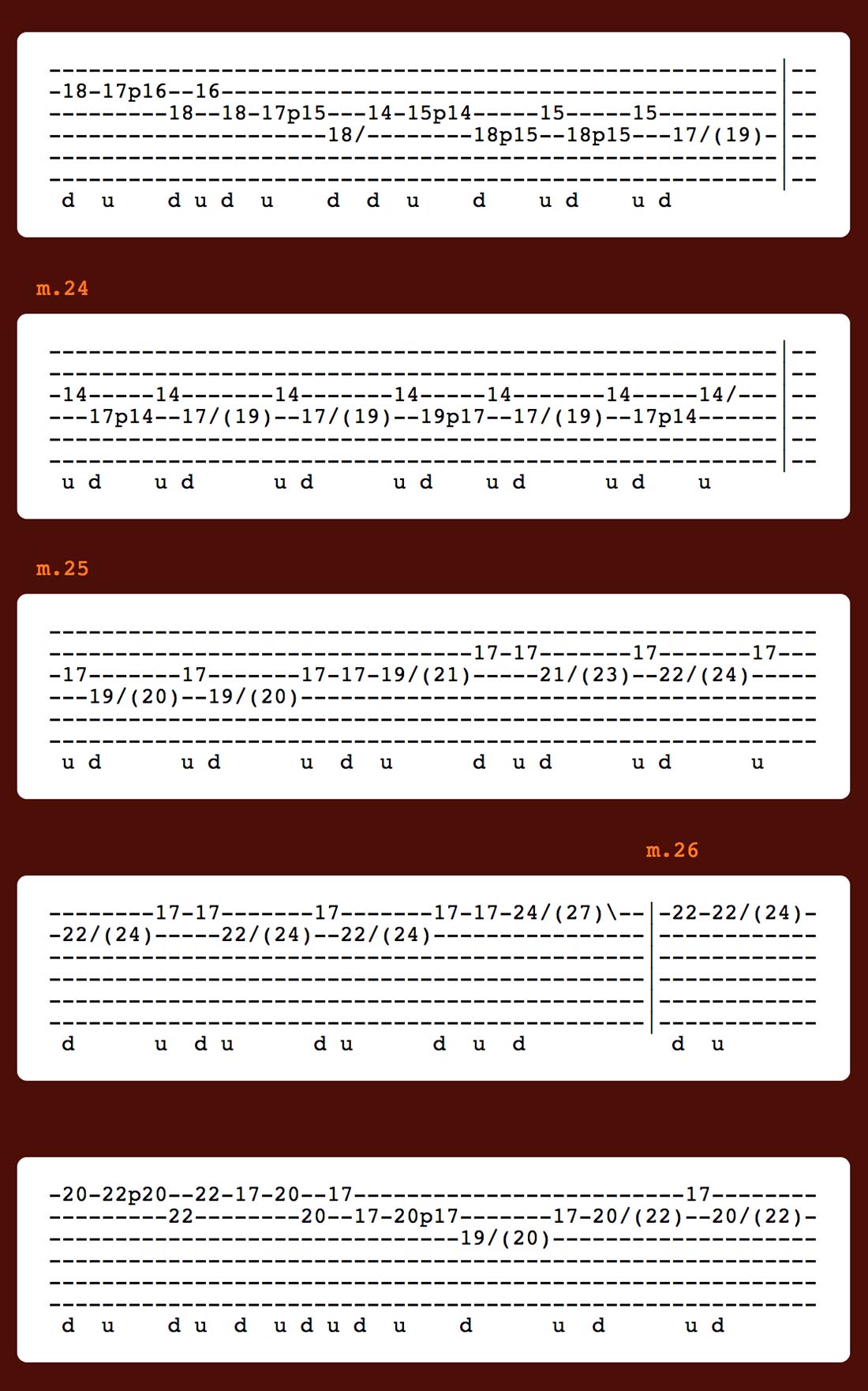 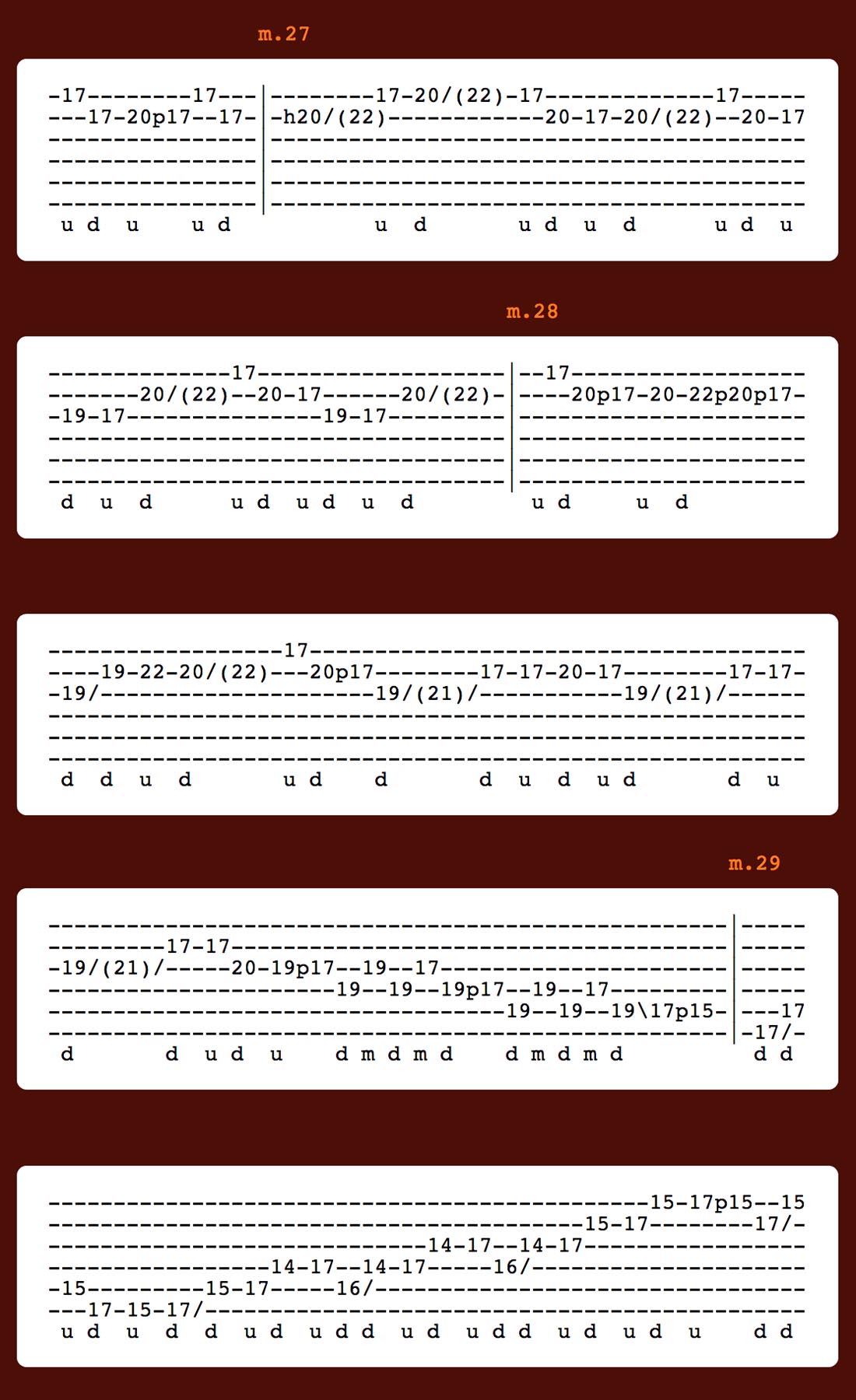 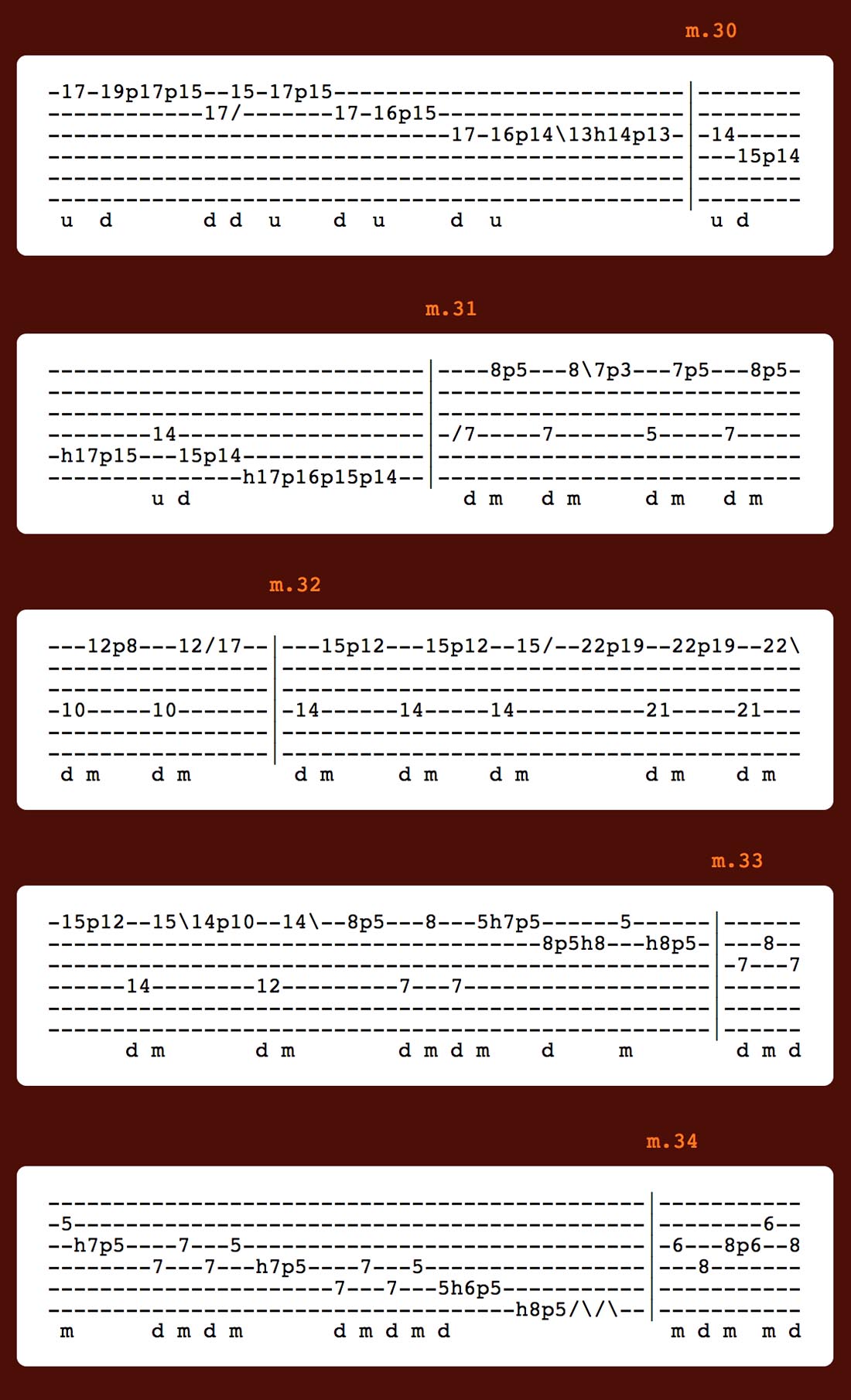 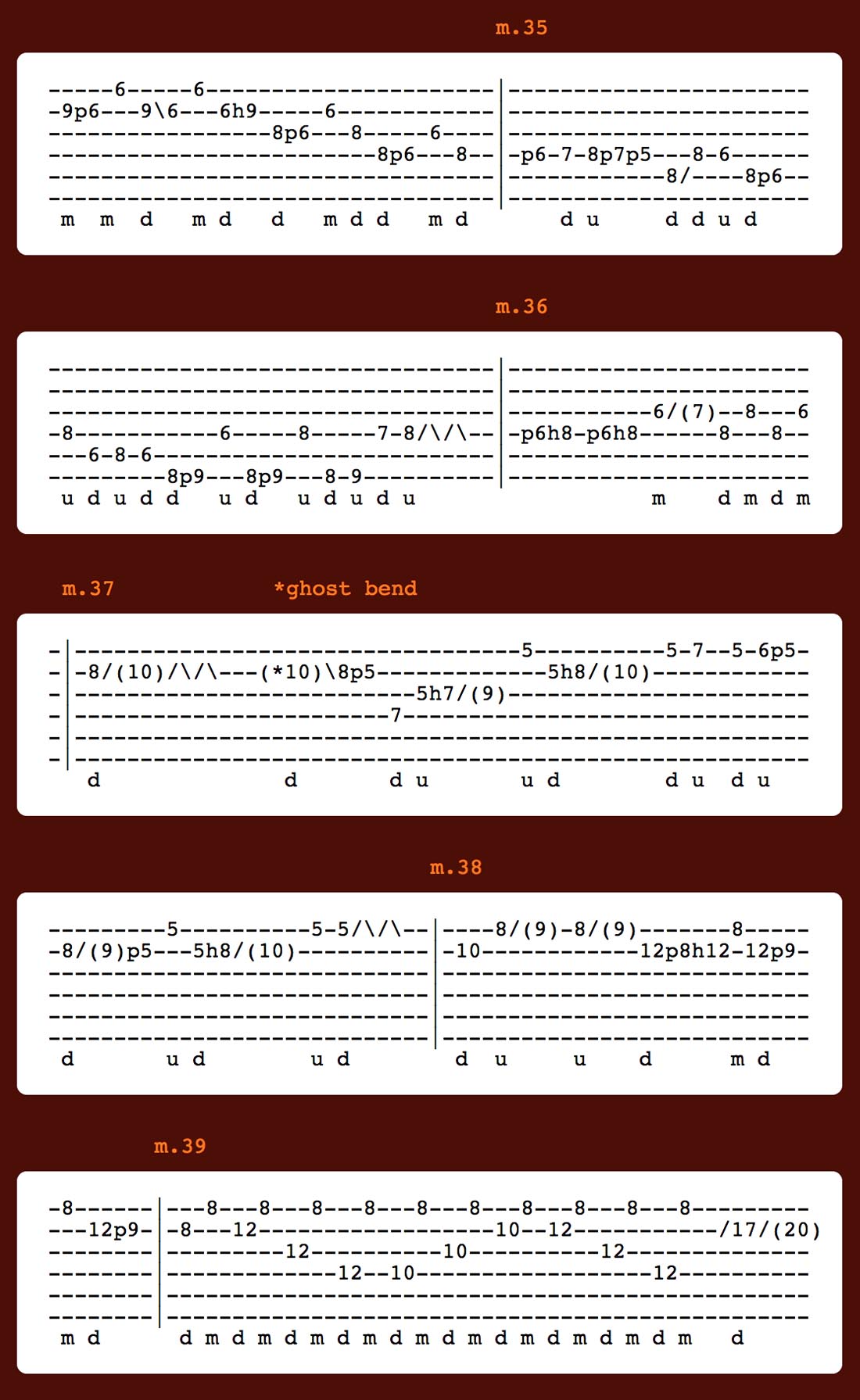 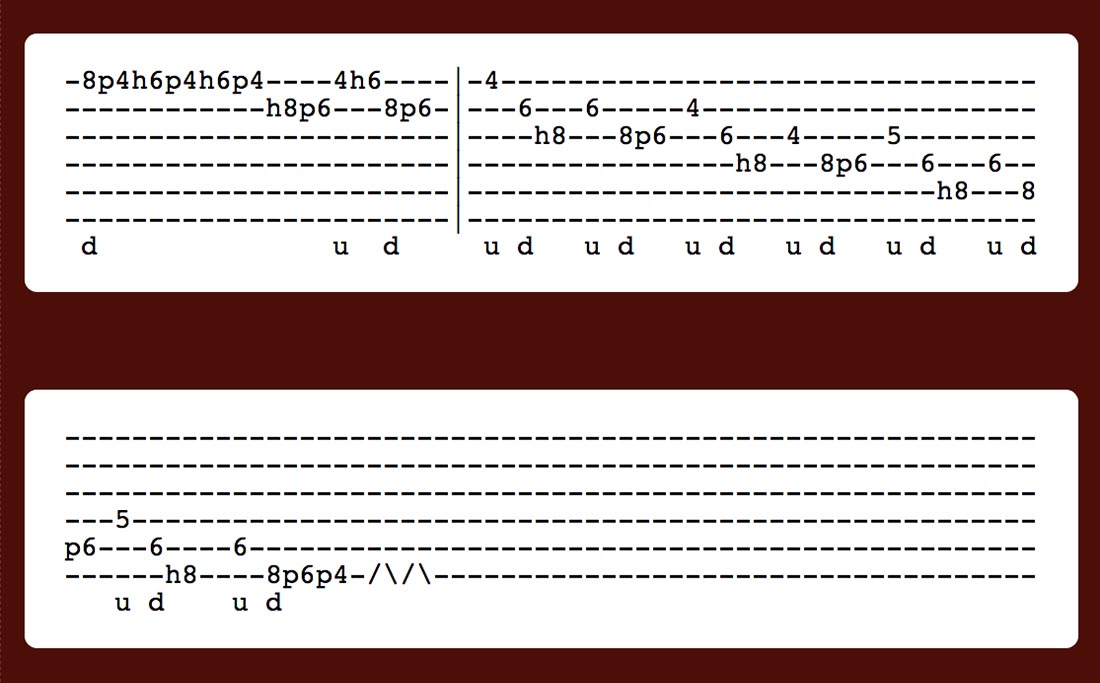 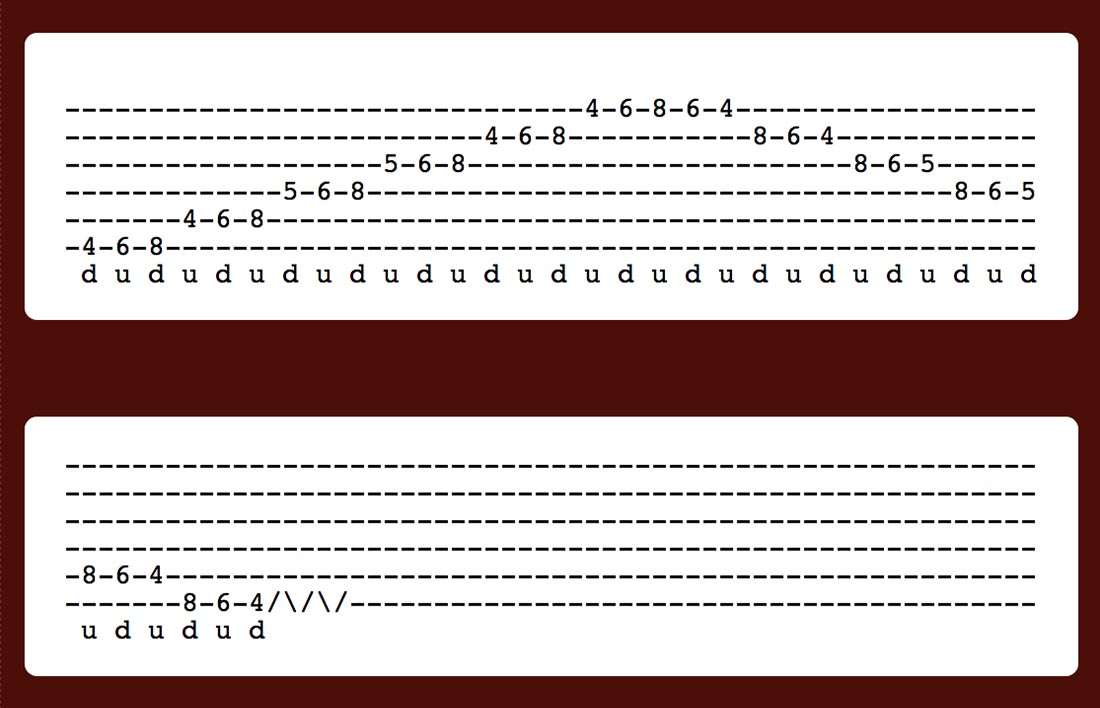 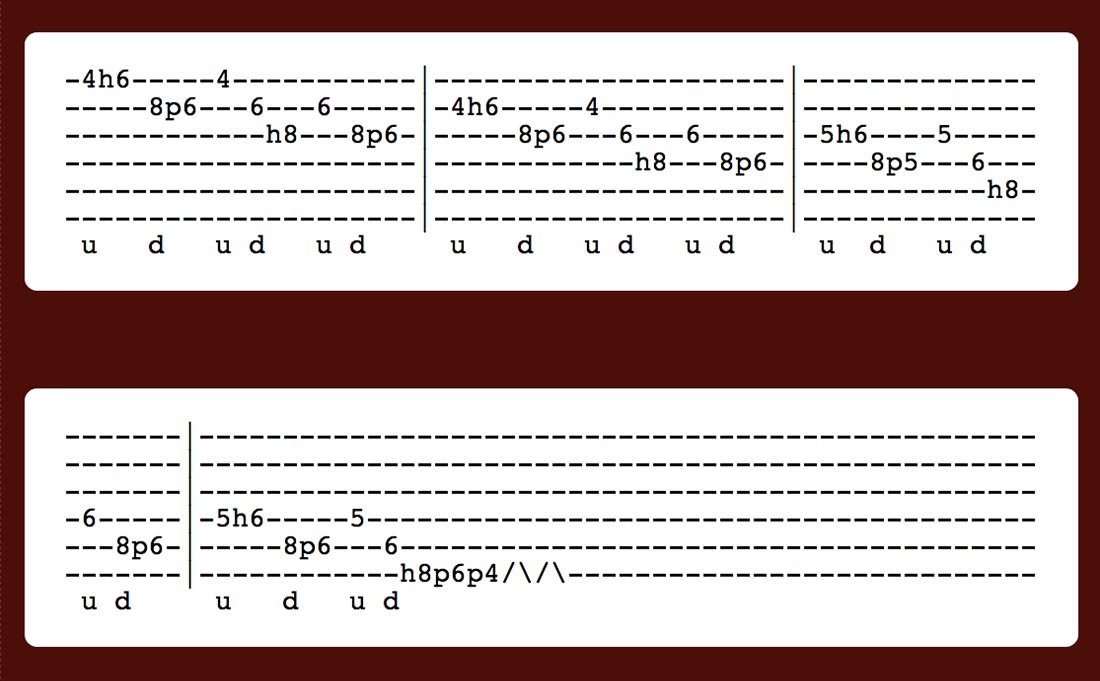 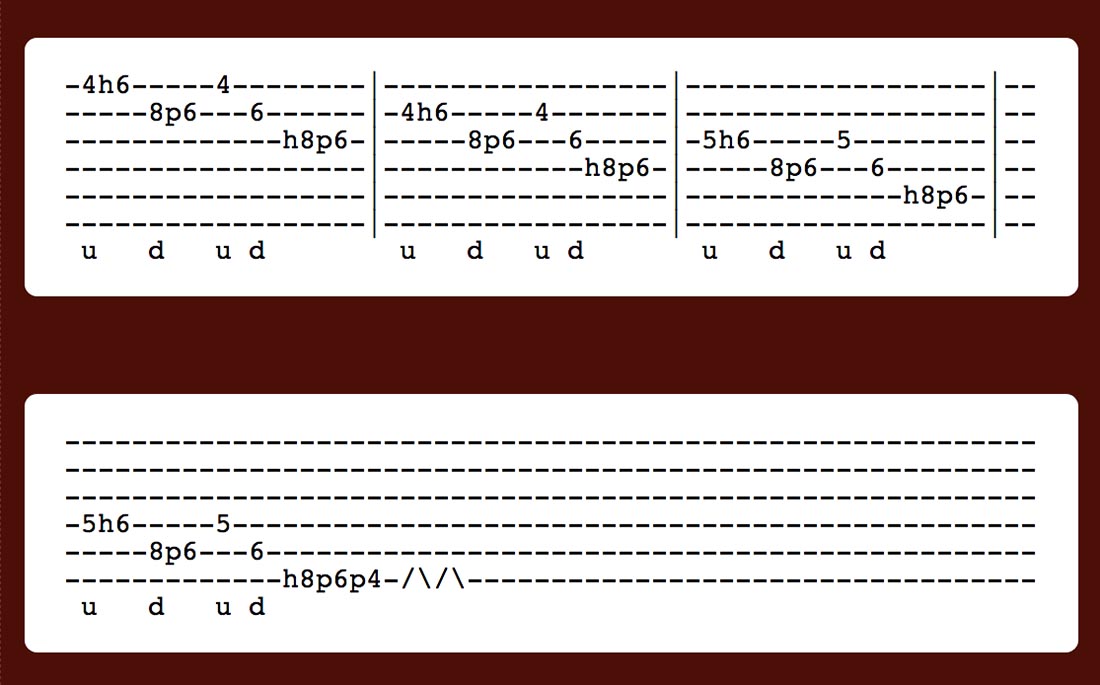