In a single escape picking style, you use either USX or DSX motion exclusively, and structure phrases so that string changes occur only during the escape pickstroke.

Single escape motions like USX and DSX are diagonal picking motions where only one of the pickstrokes — either the upstroke or the downstroke — is an escape pickstroke. In other words, only every other pickstroke can switch strings. So in the most straightforward form of a single escape phrase, string changes only occur during that pickstroke. 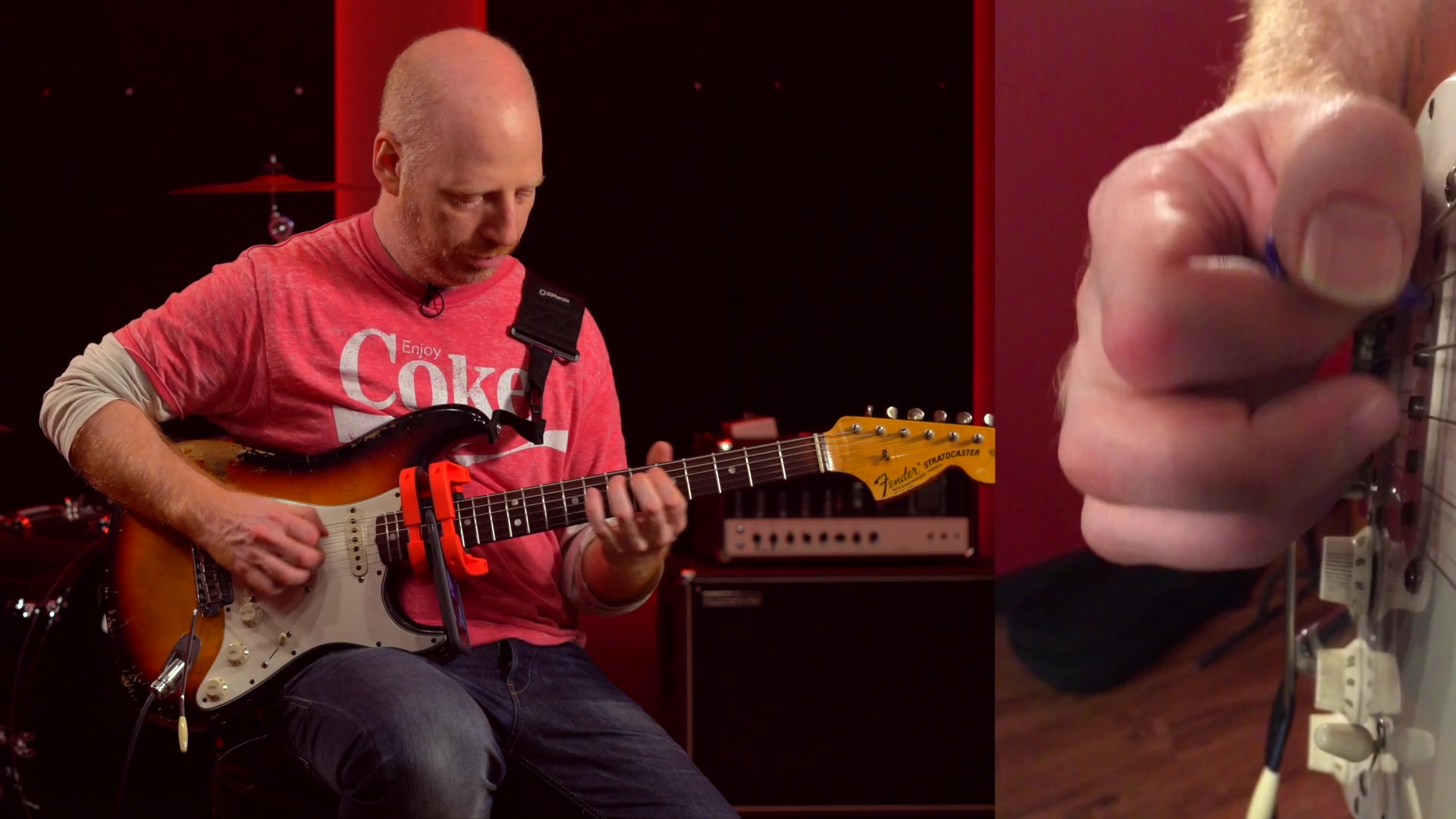 On the surface this seems unremarkable enough. It’s only when we slow down and look closely at what’s going on in the picking hand that the uniqueness of Oz’s single escape approach becomes apparent:

Oz is using a downstroke escape, or DSX motion. This is a diagonal picking motion where downstrokes go up in the air, and thus have string switching capability. When you use a DSX motion, you can only move to a new string when you play a downstroke.

So this motion is a perfect match for this phrase, because that’s exactly how its string changes work. Each string contains four notes, starting on an upstroke and ending on a downstroke. Thanks to its diagonal escape trajectory, the final downstroke clears the next string, and Oz can begin the pattern again one string higher.

The Rule of Evens

The synergy between the motion Oz is using and the phrase he’s playing makes good mechanical sense. Alternate picking is a system of twos — down and up. In a DSX motion like Oz’s, the string-switching pickstrokes are downstrokes, and they only occur every second note. So it follows that when you use a single escape motion, and you’re picking every note, you’re going to have to pick an even number of notes on every string.

And it turns out that this is a pretty natural thing to do, because a lot of guitar licks actually work this way. Think about the common one-finger-per-fret coordination exercise: 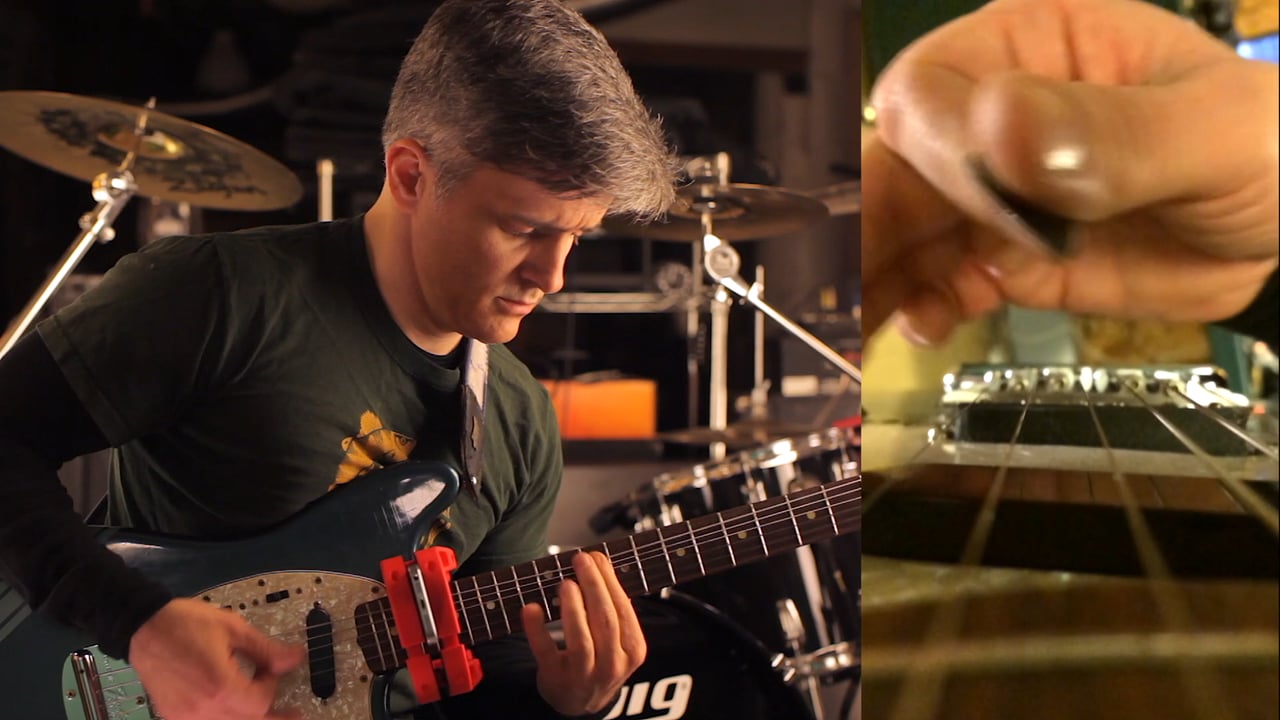 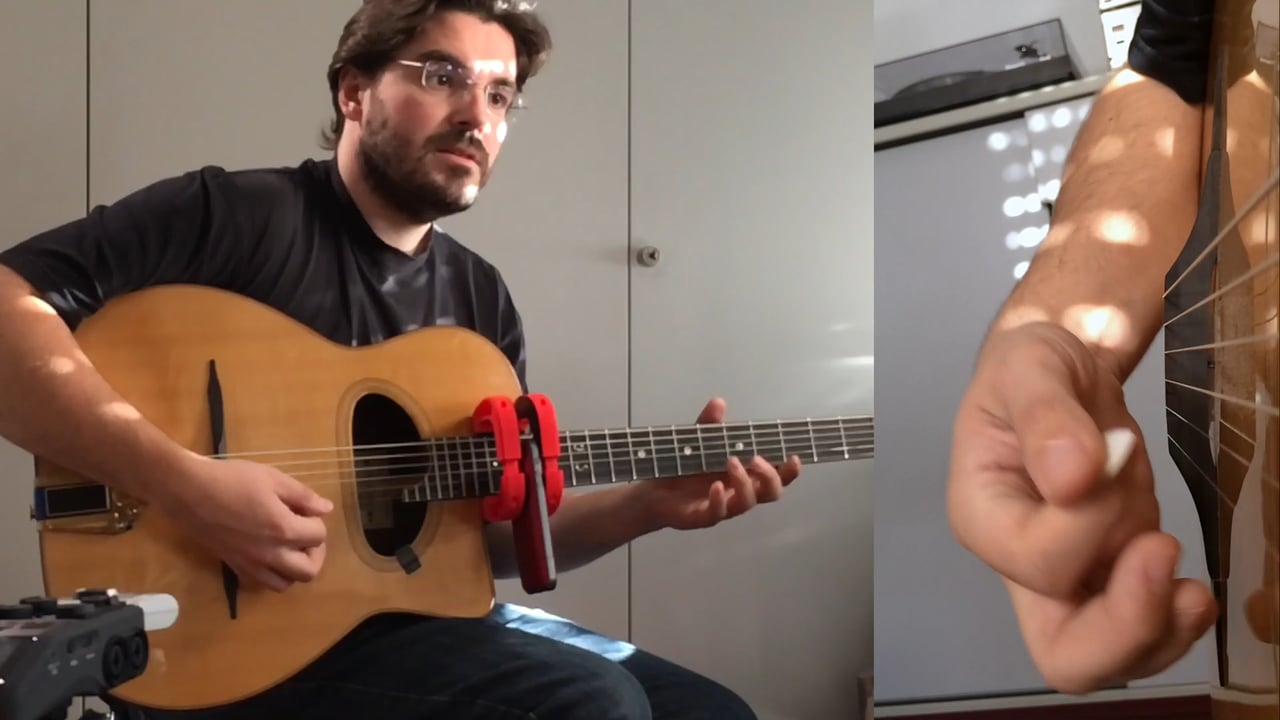 The Gypsy picking style is based around USX alternate picking motion, specifically using a distinctive blend of forearm and wrist joint action, and an immediately recognizable flexed wrist posture. So phrases like this one, with four notes per string, starting on downstrokes, are a perfect fit for this type of picking motion, and very common in Gypsy vocabulary.

One of the most striking examples of a player who chooses phrases for single escape motion is fusion pioneer John McLaughlin. John’s primary motion mechanic is DSX wrist, using the same arm position, and performed with the same “2 o’clock” motion we saw when we looked at Andy Wood. Here’s a great shot of John’s motion from a 1976 performance with the group Shakti:

In this fortuitous down-the-strings camera angle, it’s super easy to see the way John’s DSX alternate picking motion follows a diagonal path with respect to the guitar, shooting way up into the air above the E string. He’s also holding the pick with an upward pickslant, to correct the pick attack, which is what we’d expect when this type of escape path is used.

John’s use of downstroke escape motion is why many of his signature phrases are arranged so that downstrokes are the final note on each string. A classic McLaughlin pattern is this one, which is four notes long: 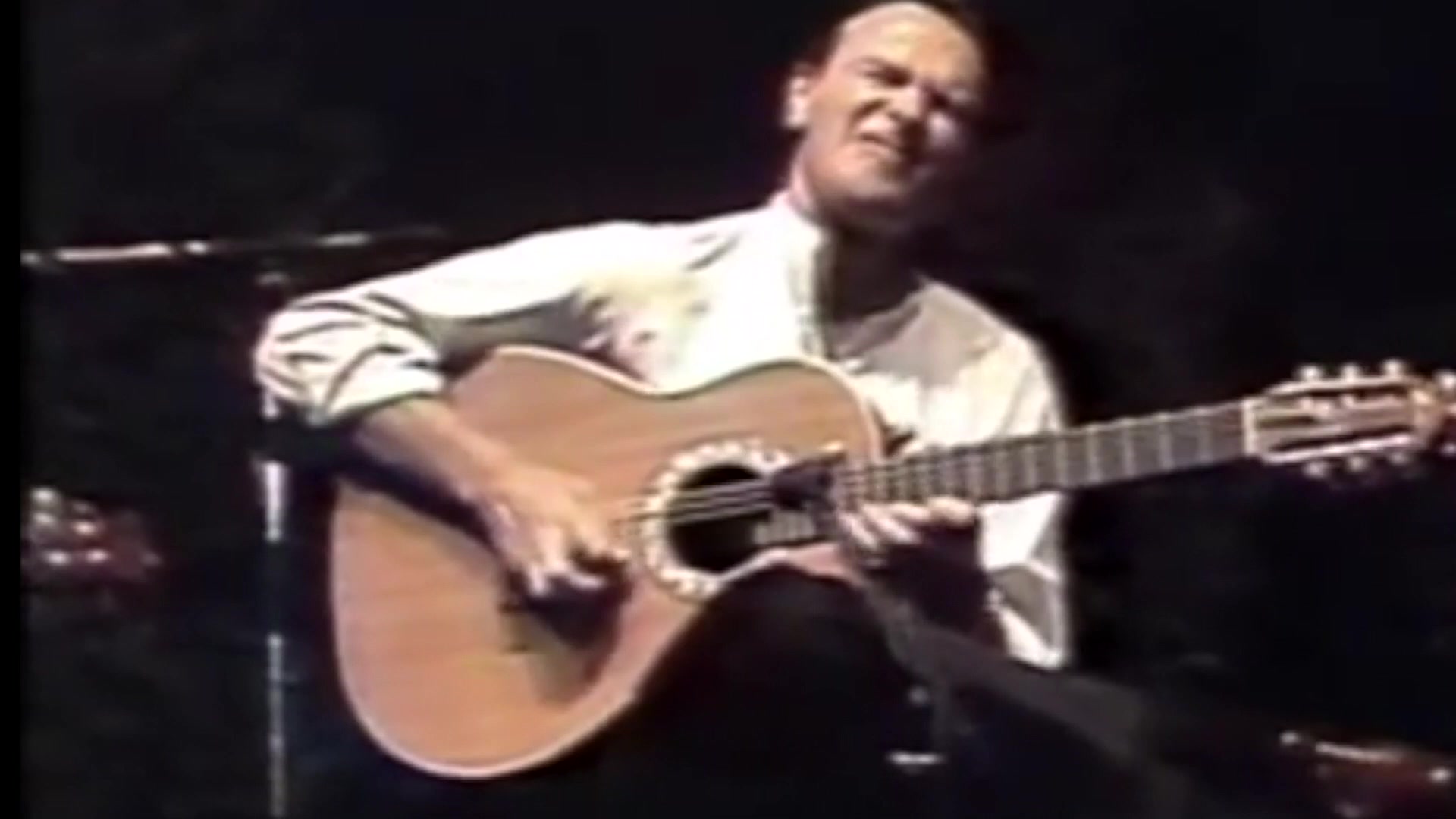 If you’ve ever transcribed any McLaughlin solos, you’ve no doubt encountered this pattern many times. Although it’s not obvious here from this camera angle, when we film down the strings in slow motion, the single escape construction of this phrase becomes evident: 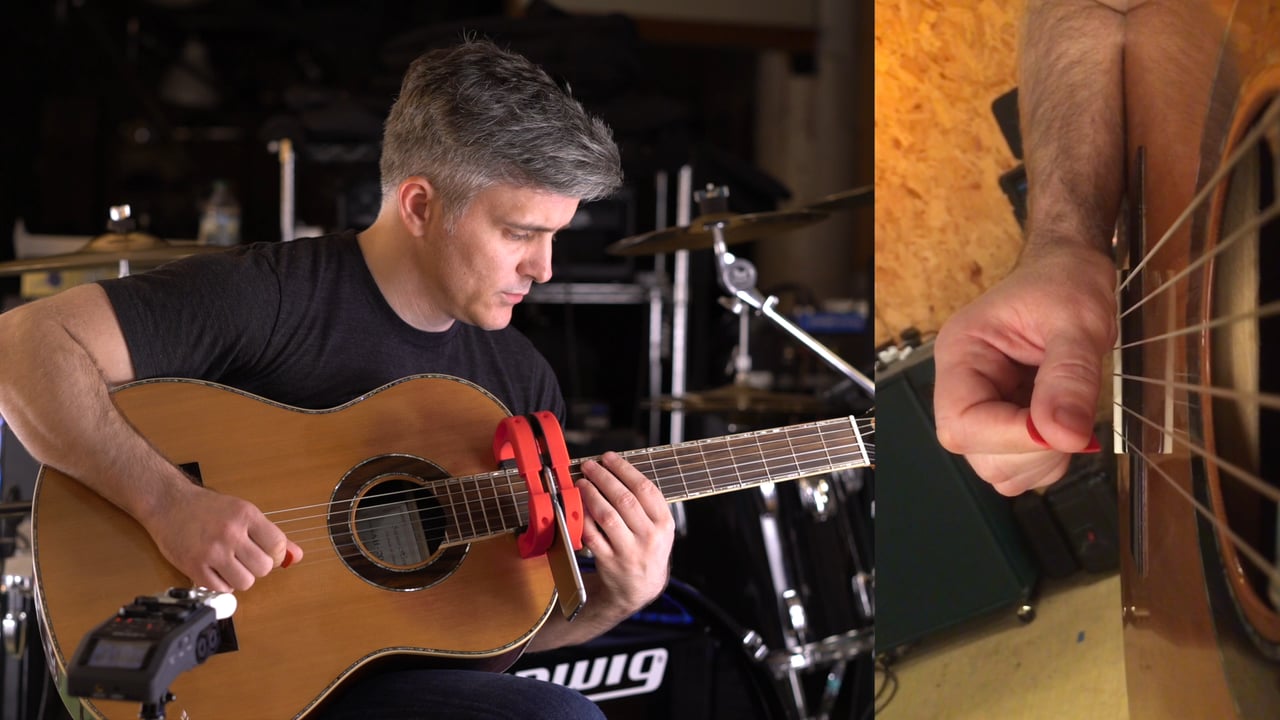 Just like Oz’s scale, every string of this pattern contains four notes, starting on an upstroke, and ending on a downstroke. Because of its escape trajectory, that final downstroke moves over the top of the next higher string, allowing us to transition with no mechanical penalty.

A large percentage of John’s fastest playing is organized just like his four-note pattern, with even numbers of notes per string terminating with downstrokes, to match up with his DSX alternate picking motion. This includes not just specific pattern-based phrases like the four-note lick, but also more melodic soloing where the even-numbered construction is less obvious.

A fantastic example of this is John’s blazing take on the Ray Noble classic “Cherokee” with the Tonight Show band in 1986: 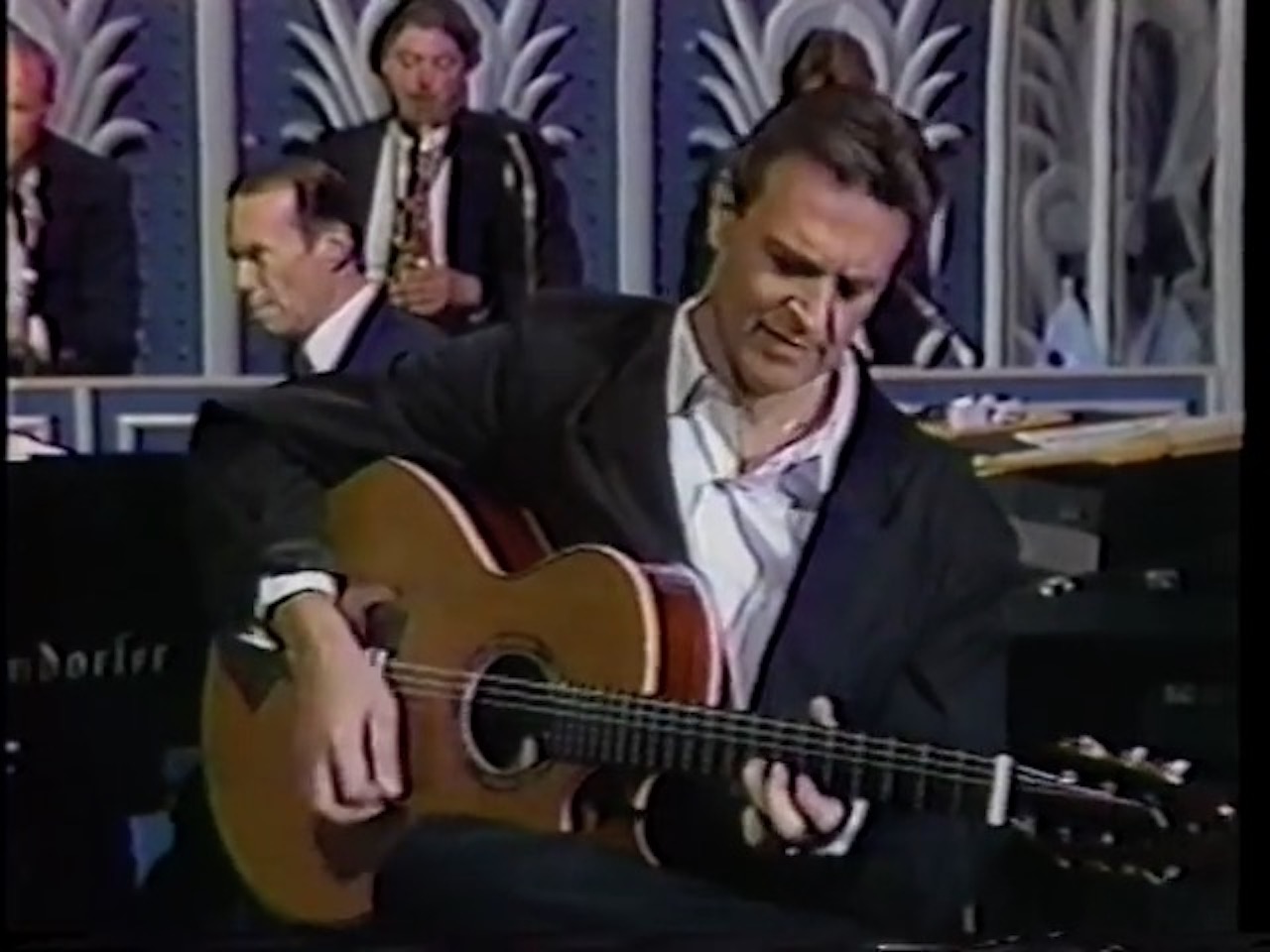 Watching John’s performance, it’s hard to imagine that the lines he’s playing might have been engineered down to the level of assigning specific pickstrokes to specific string changes. But indeed that is the case. Examining the transcription of even a short section of his solo reveals the hidden support structure of John’s ingenious, downstroke-powered string changes:

In this two-bar section, nearly every single high-speed string change occurs when the final note on the string is a downstroke. And that’s not unusual. In the first 33 measures of the solo — the entire verse, before the bridge kicks in — there are 49 string changes that occur during fast single-note playing. Only 4 of them are upstroke string changes. The remaining 45, representing a staggering 92% of the fast string changes, are downstroke escapes.

To be clear, the process through which great players like John organize their vocabularies to fit particular picking motions is largely subconscious. We know this because the players we’ve interviewed are mostly unaware of the motions they are making, even when those motions are pointed out to them.

For example, Andy Wood’s DSX motion is very similar to John’s even down to the specific type of wrist motion he uses. For this reason, Andy typically chooses to start pentatonic phrases on an upstroke, ensuring that the final note on each string is a downstroke, to capitalize on the escape: 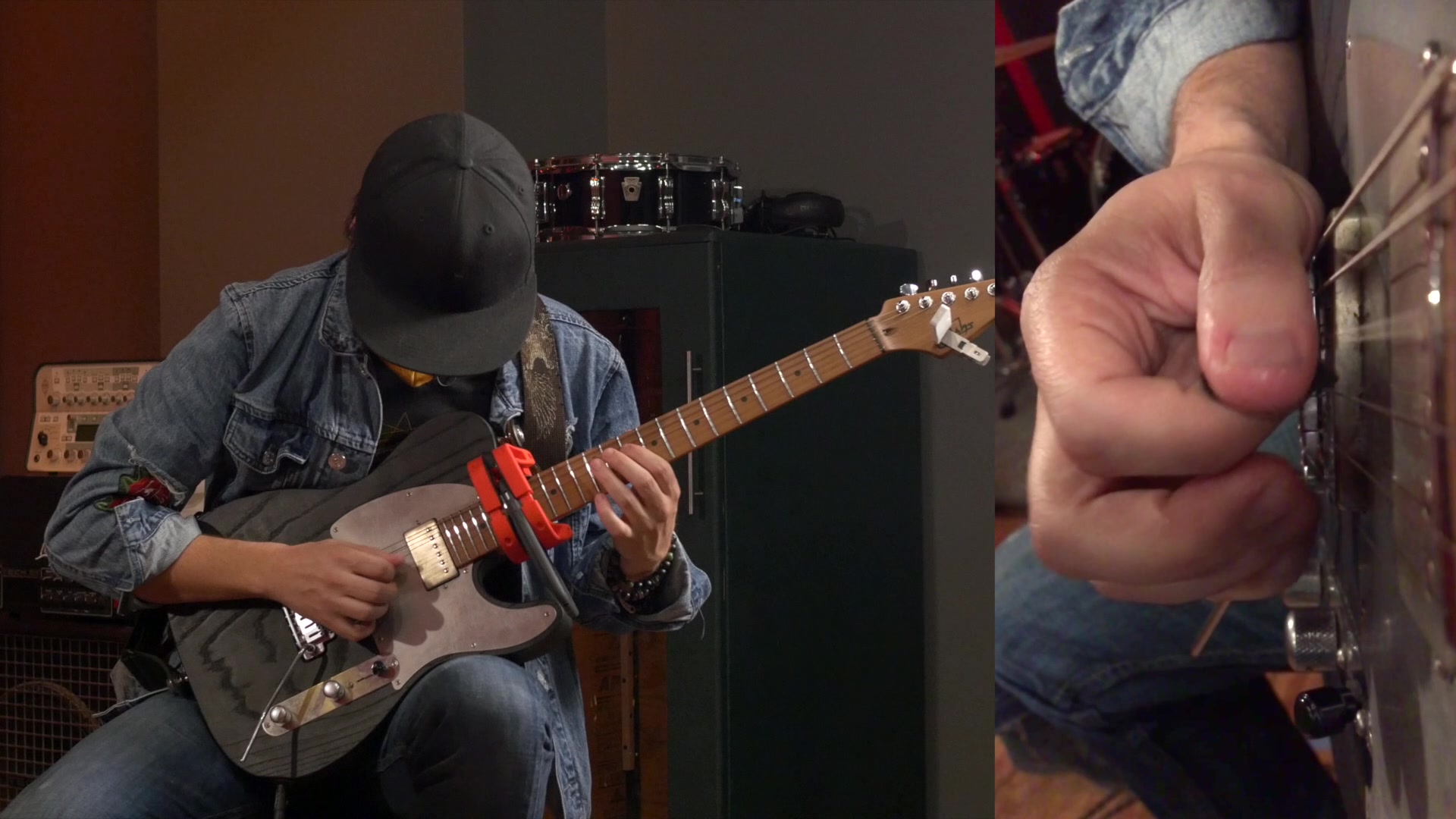 In one fun moment in our Electric Workshop interview, Andy tried playing these basic sequences starting on different pickstrokes. It wasn’t apparent until reviewing the slow motion video later on that the faster takes were always upstroke, even when we thought during the interview that they were downstrokes.

So the tendency toward primary motion appears to be wired deeply, below the level of conscious awareness. This is not a negative — it’s a big win. This allows players to make sophisticated choices like John’s and Andy’s without nerding out on individual pickstrokes, and instead paying attention to bigger-picture physical feedback. Phrases that feel and sound smooth are kept, while those that sound sloppy and feel awkward are avoided. Over time, vocabulary evolves to contain only phrases that can be played with a certain degree of physical ease and reliability.

At the time of John’s Tonight Show performance, the fact that he was using an escaped picking motion was simply not common knowledge, if it was known at all. The link between this motion and the mechanics of switching strings was probably lesser known still. The idea that one of the most purely capable picking technicians of all time might be subconsciously tailoring his vocabulary to the capabilities of his picking motion would have sounded a little crazy, if not maybe even outright insulting to some of his fans. But to be clear, John’s ability to do this isn’t a detriment, it’s an enabler. More importantly, this iterative process where motor skill interacts with musical vocabulary appears to be the way all complex picking technique is learned, regardless of the specific picking motions or vocabularly involved.

Multi-axis joints like the wrist can theoretically make lots of different motions, but as John and Andy demonstrate, the wrist is still perfectly suitable for single escape playing when you rely on just one of its axes for an entire phrase. The result of this single-axis operation is that single escape motions are the mechanically simplest picking motions you can make. In fact, joints like the elbow only have one axis of motion, so when you’re using that joint exclusively, single escape motion is pretty much what you get.

Because of this mechanical simplicity, single escape motions are easy to do fast. Many of the commonly played “fast” licks in different musical styles are single-escape phrases that feature a simplified structure with even numbers of notes per string. In rock and metal, one of the most common is this six-note pattern: 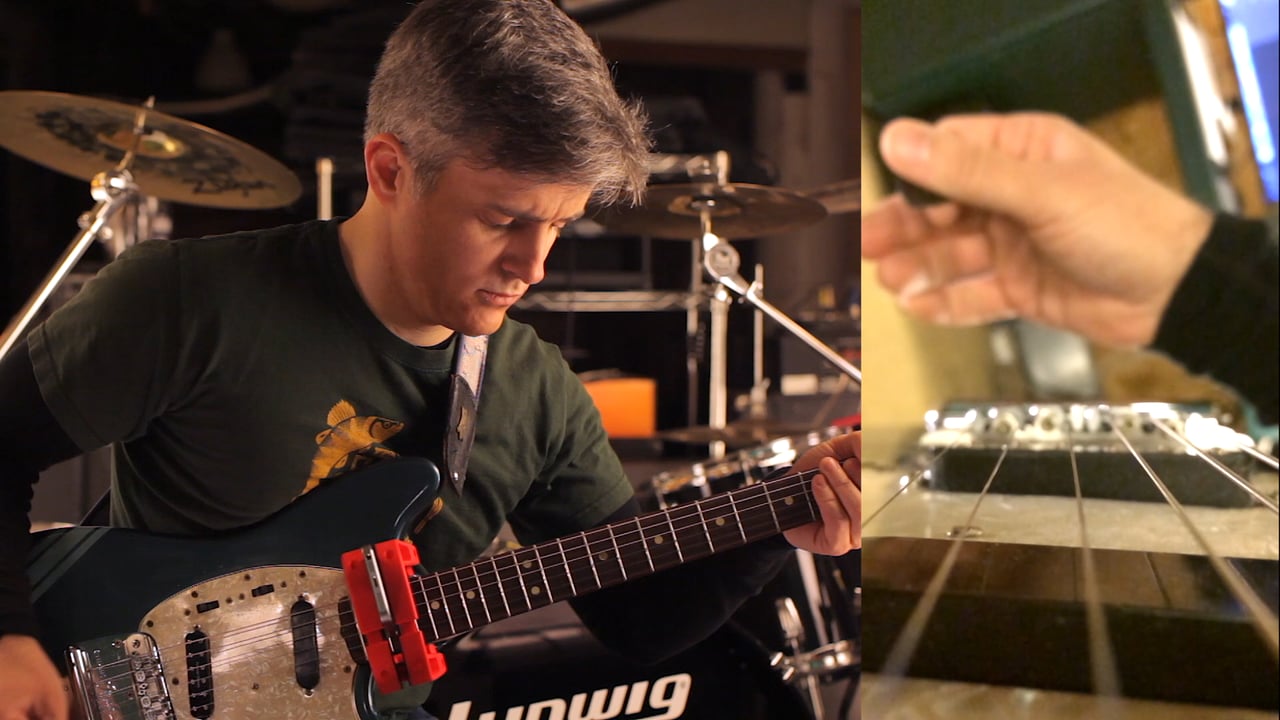 Made famous by Yngwie Malmsteen, this simple, repeating phrase consists of six notes and always starts on a downstroke. This initial downstroke is easy to anticipate by feel, and many players, including Paul Gilbert, have spoken about using this pattern specifically as a way to develop high-speed hand synchronization through chunking.

In this case, we’re using a combination of wrist and forearm motion similar to what Teemu Mäntysaari uses as his primary motion: 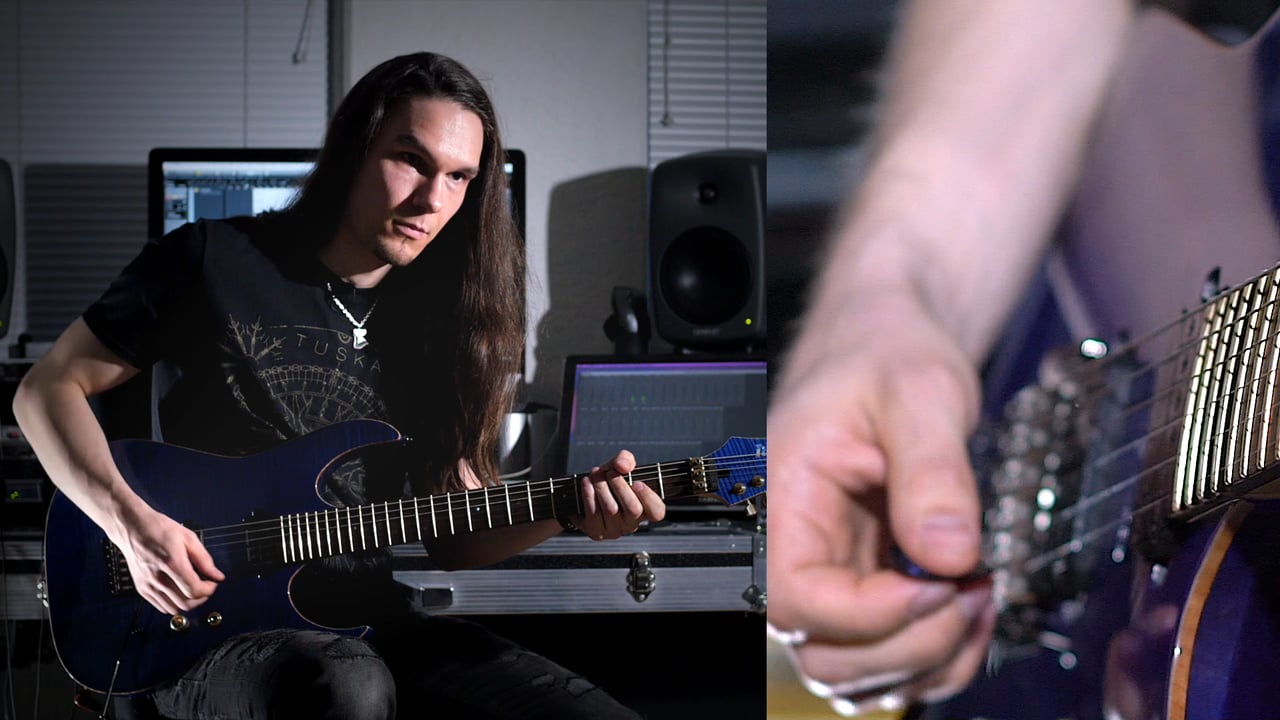 Teemu is playing the pattern on a single string, but because this is a USX motion, upstrokes are still escaping. Even though he’s not switching strings, this isn’t redundant or mechanically costly. It’s just a wrist motion, and switching to any other wrist motion wouldn’t make it any more or less mechanically efficient — it would just make it less suitable for moving from one string to another. By using the escaped version as his primary motion, Teemu gains the advantage of not having to change the motion when moving the pattern across the strings: 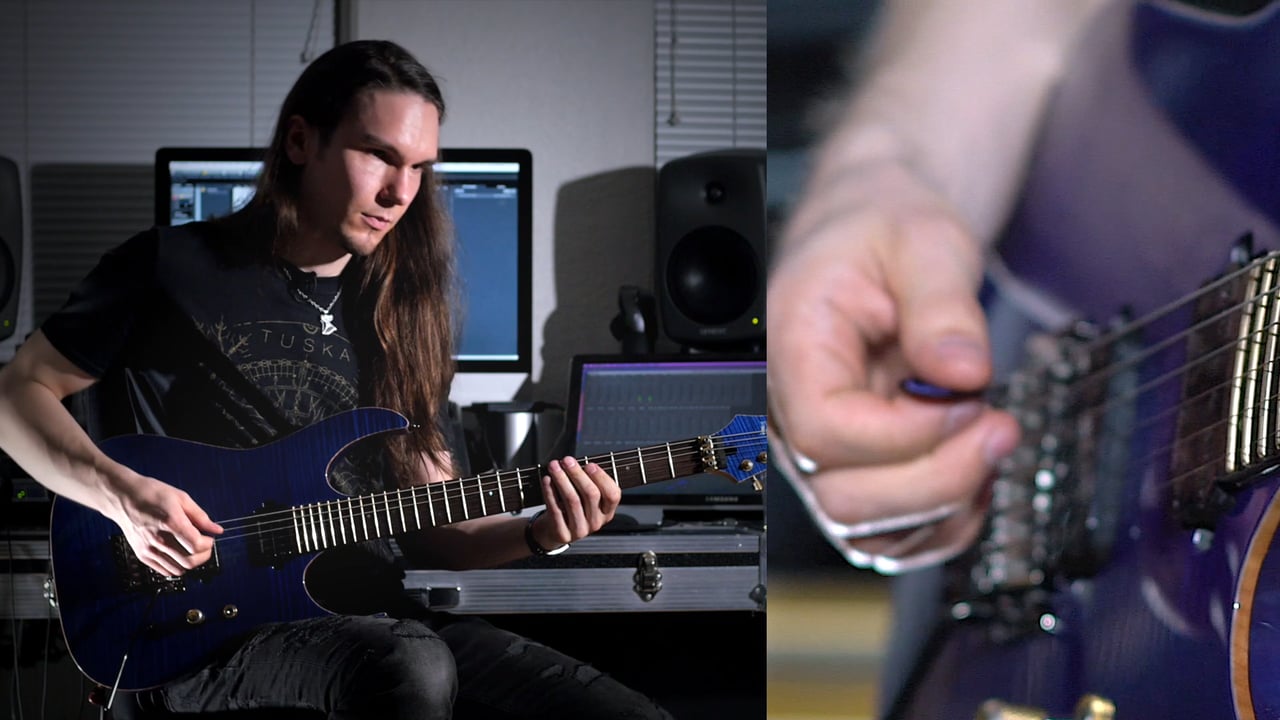 Each six-note unit of the pattern is a self-contained chunk, starting on a downstroke and ending on an upstroke. Because of the final upstroke, Teemu can play this pattern on any sequence of strings, in any direction, either ascending or descending. The direction of the phrase doesn’t matter. As long as the final note is an upstroke, he can move to a higher or lower string smoothly.

< PREV: Primary Motion
|
NEXT: Single Escape Plus Swiping >
Return to: