In the primary DBX style, double escape motion is used as the starting point for most phrases, often with subtle modifications at higher speed, or for phrases were two escapes are not necessary.

A great example of player whose technique fits this style is Molly Tuttle, who maintains her primary double escape wrist motion across a wide range of phrases, like this blazing five-string fill: 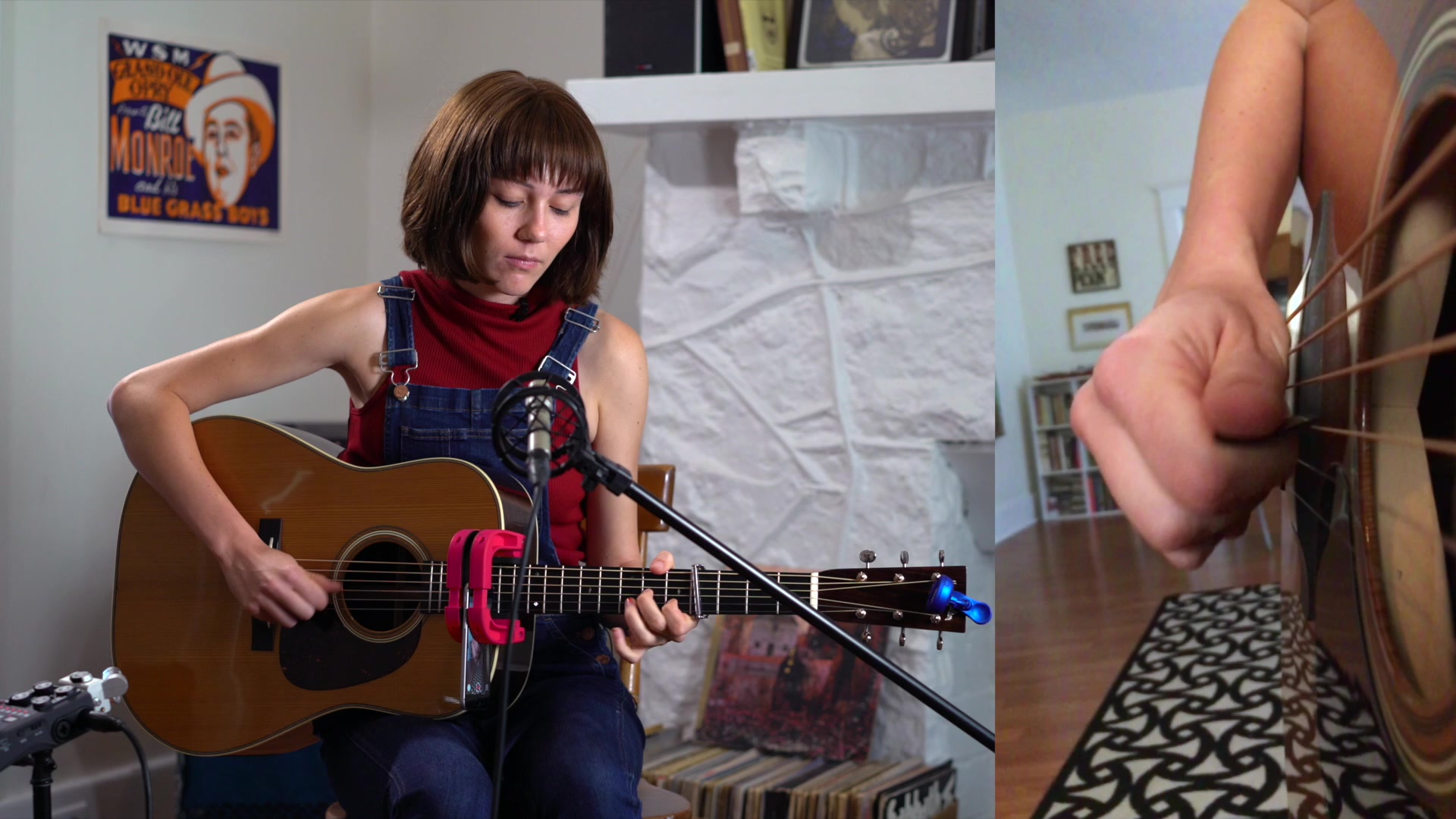 The phrase ends with a four-string sequence where every string change is an upstroke, which could technically be played with a USX technique. But in slow motion it’s clear that Molly executes the entire phrase with DBX:

As we saw when we looked at primary motion, the subconscious tendency to standardize on a specific picking motion even when others might also work is probably one of economy, reducing the amount of time and effort it takes to master and memorize complicated motor skills like picking technique.

When it comes to phrases that require alternate picking only one note on a string, there’s no choice to make, since a curved picking motion is the only way to play a single note and escape again. One such phrase, the ragtime-inspired arpeggio section from the bluegrass standard “Beaumont Rag”, has become a benchmark of double escape proficiency: 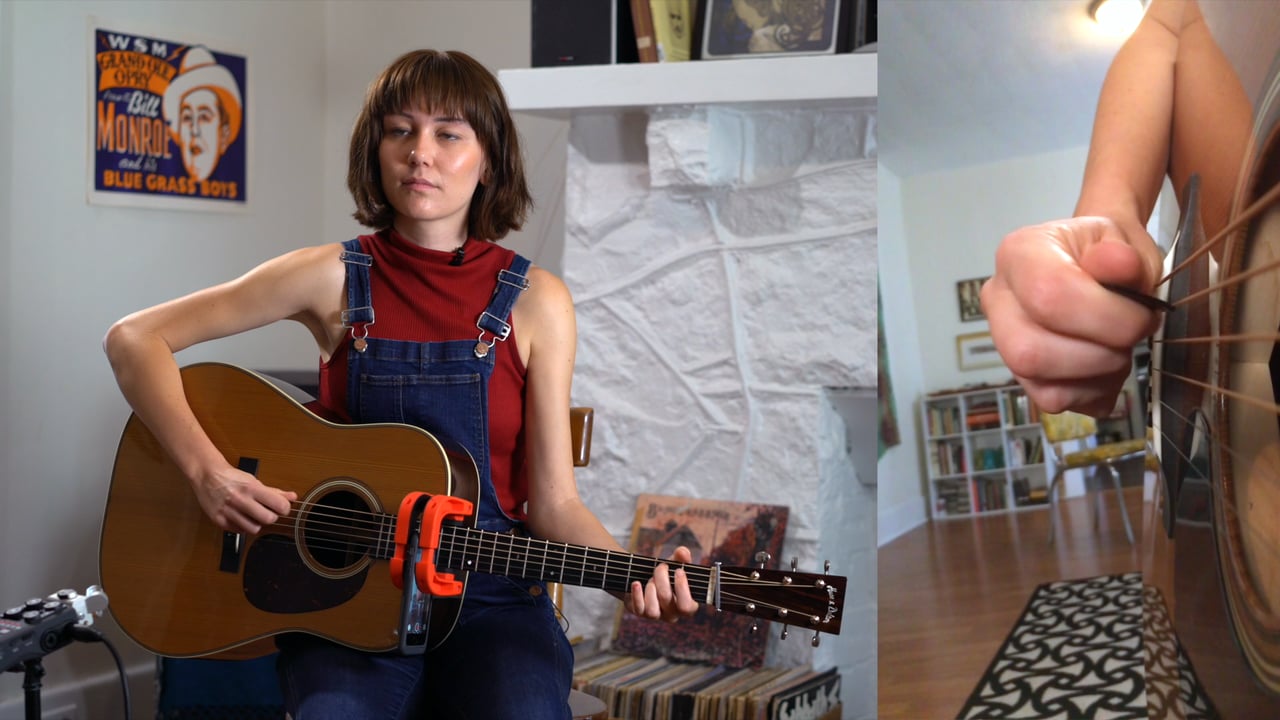 In this pattern, known generically as a forward roll, a three-note arpeggio is played ascending across three strings with one note on each of them. Because the pattern has an odd number of notes — three — each successive iteration starts on a different pickstroke. This generates repeated string skips with both inside and outside picking:

Even though primary DBX players like Molly may use a broadly similar motion much of the time, they still make changes to that motion based on the phrase they’re playing, and these changes can be surprisingly complex.

A really interesting example of this is the double escape technique of Olli Soikkeli, whose motion is based on a blend of wrist and forearm joint action:

Slowed down, the curvature of Olli’s picking motion in this moderate-speed swing line is consistent across the length of the phrase:

What’s surprising about this is that Olli actually built his technique playing Gypsy jazz, which is a style essentially designed for USX motion. In fact, Gypsy swing is among the most standardized picking techniques in guitar, where Django’s particular flexed-wrist form and blend of forearm and wrist motion are taught systematically to new players.

As a result, Gypsy vocabulary features an array of standard phrases arranged to make upstroke escape possible. Diminished arpeggios are a great example of this type of fretboard organization: 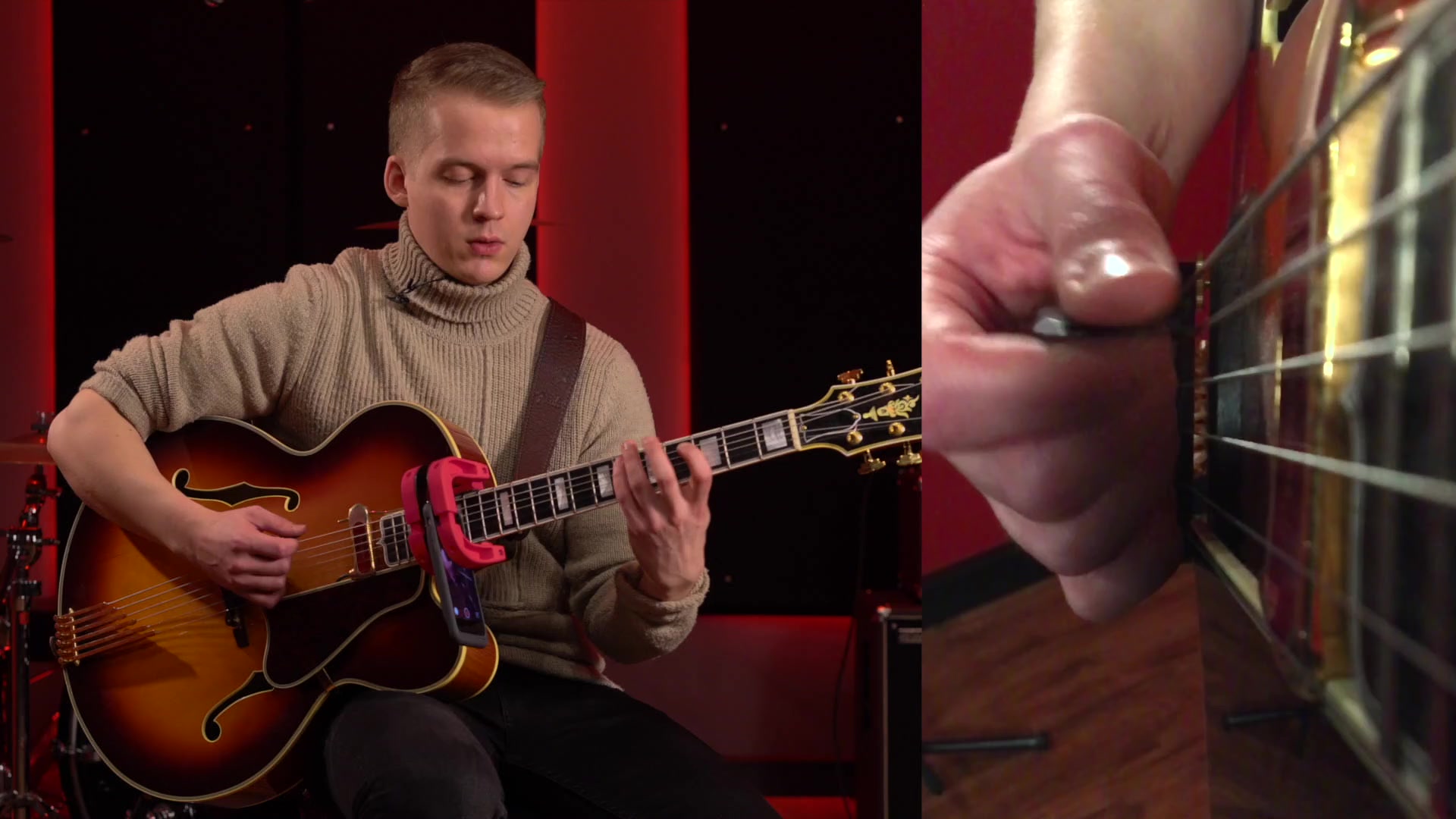 When fretted two notes per string and played starting on a downstroke, each string ends with an upstroke, making diminished arpeggios a perfect candidate for Gypsy-style USX technique. But when Olli plays them, his motion doesn’t look like USX:

In Gypsy-style USX motion, upstrokes escape with help from the forearm joint, and downstrokes trap, frequently rest stroking against the next higher string in the process. But when Olli plays this phrase, the downstrokes don’t trap or rest. Instead, the downstroke starts out high above the strings for a loud attack, but immediately upon striking the string it reverses trajectory, escaping above the plane of the strings a small amount as the motion finishes:

This observation is really interesting because in our interview Olli explains that he uses Gypsy technique for phrases like this one to deliver the downstroke attack called for in that musical style. But upon viewing the footage, it became clear that he wasn’t actually using Gypsy technique at all. Instead, when Olli plays “Gypsy”, he simply tweaks his double escape technique so that downstrokes are bigger and louder than upstrokes, but the motion still escapes at both ends. This is another testament to the stickyness of primary motion, where a player may find it subconsciously less work to modify a motion they already know than to learn a completely new one.

Sometimes this modification of primary double escape motion is taken even further to where it actually becomes single escape motion. There are lots of examples of this in the technique of picking pioneer Steve Morse: 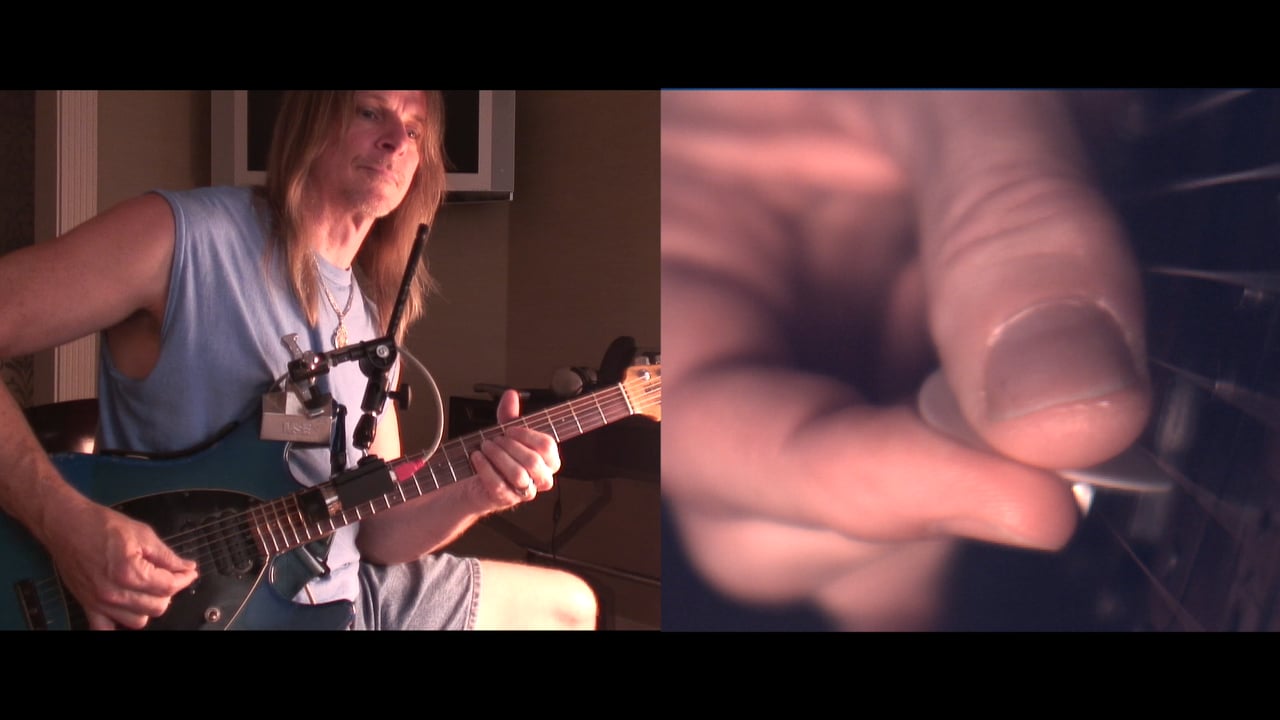 This familiar one-finger-per-fret coordination exercise is a classic single escape phrase because it contains four notes on each string. Depending on the pickstroke you start with, it can be played with either USX or DSX motion. In this example Steve is starting on an upstroke, so the final note on each string is a downstroke, requiring DSX motion. And when viewed up close, that’s almost what Steve’s motion looks like:

Steve has modified the symmetry of his technique similar to the way Olli did, except in reverse. In Steve’s modification, downstrokes are now the escape strokes, and upstrokes now trap, effectively becoming DSX motion:

What’s interesting about this is that Steve’s pickstroke still curves upward upon hitting the string, just as we would expect of a double escape motion. But it just doesn’t go far enough to actually escape. In fact, if you watch the full phrase in slow motion, you can see that Steve occasionally executes a rest stroke on upstrokes, where the pick cannot phsyically escape because the string is in the way.

The appearance of this is really quite unique. Common DSX mechanics like elbow motion and even other wrist motions like Andy Wood’s DSX technique appear to move in a straight line when viewed down the strings. But when double escape players like Steve modify their motion to be single escape, it often retains aspects of its double escape shape.

In essence, when confronted with phrases that don’t actually require both escapes, players like Steve and Olli are subconsciously converging on the same solution to simplify their techniques: single escape motion. 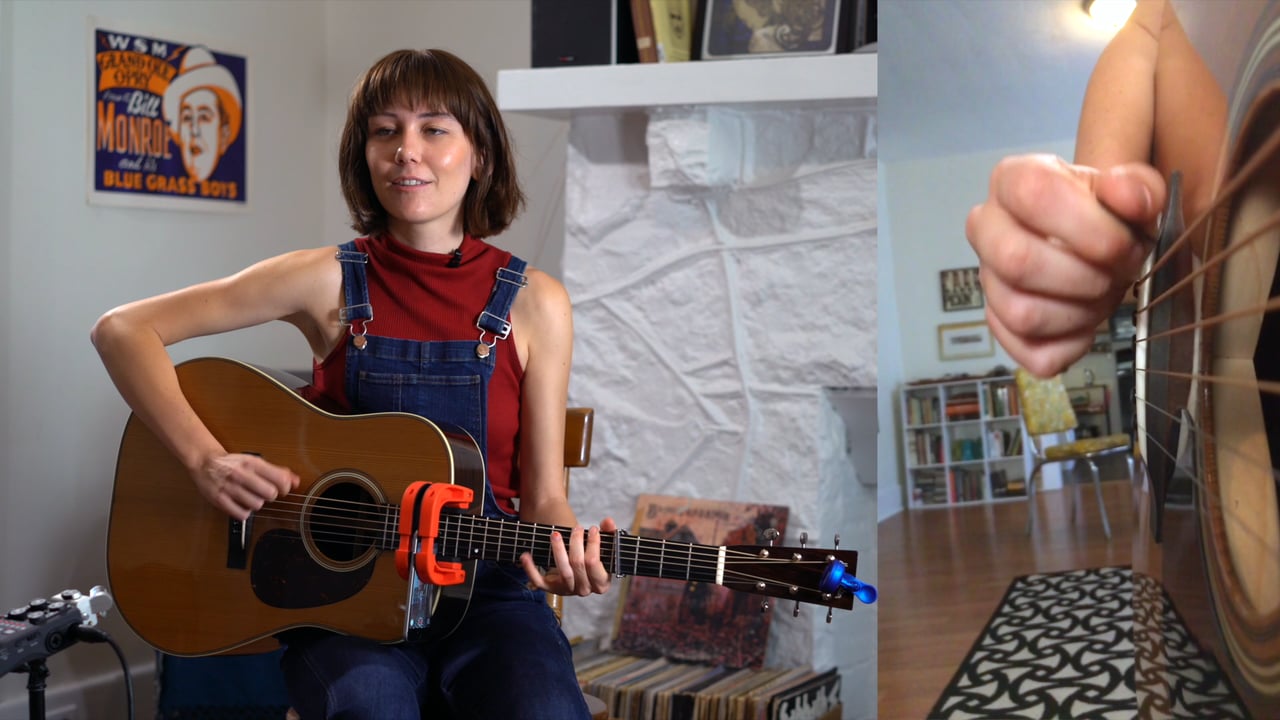 The first three notes of this phrase occur on the low E string, starting and ending on a downstroke. And in slow motion we can see that Molly plays this with DSX motion, where only the downstrokes actually rise above the E string and escape:

Just as with Steve’s approach, the three notes on the E string still bear some curvature, as the portion of the pickstroke to the right of the string in this landscape example appears flatter than the escape portion to the left of the string. Once Molly reaches the A string, she reverts to her U-shaped double escape motion again.

This unique hybrid approach, where the low E string uses DSX and the A string uses DBX looks almost exactly like what Brendon Small does when playing six-note patterns on the two lowest strings: 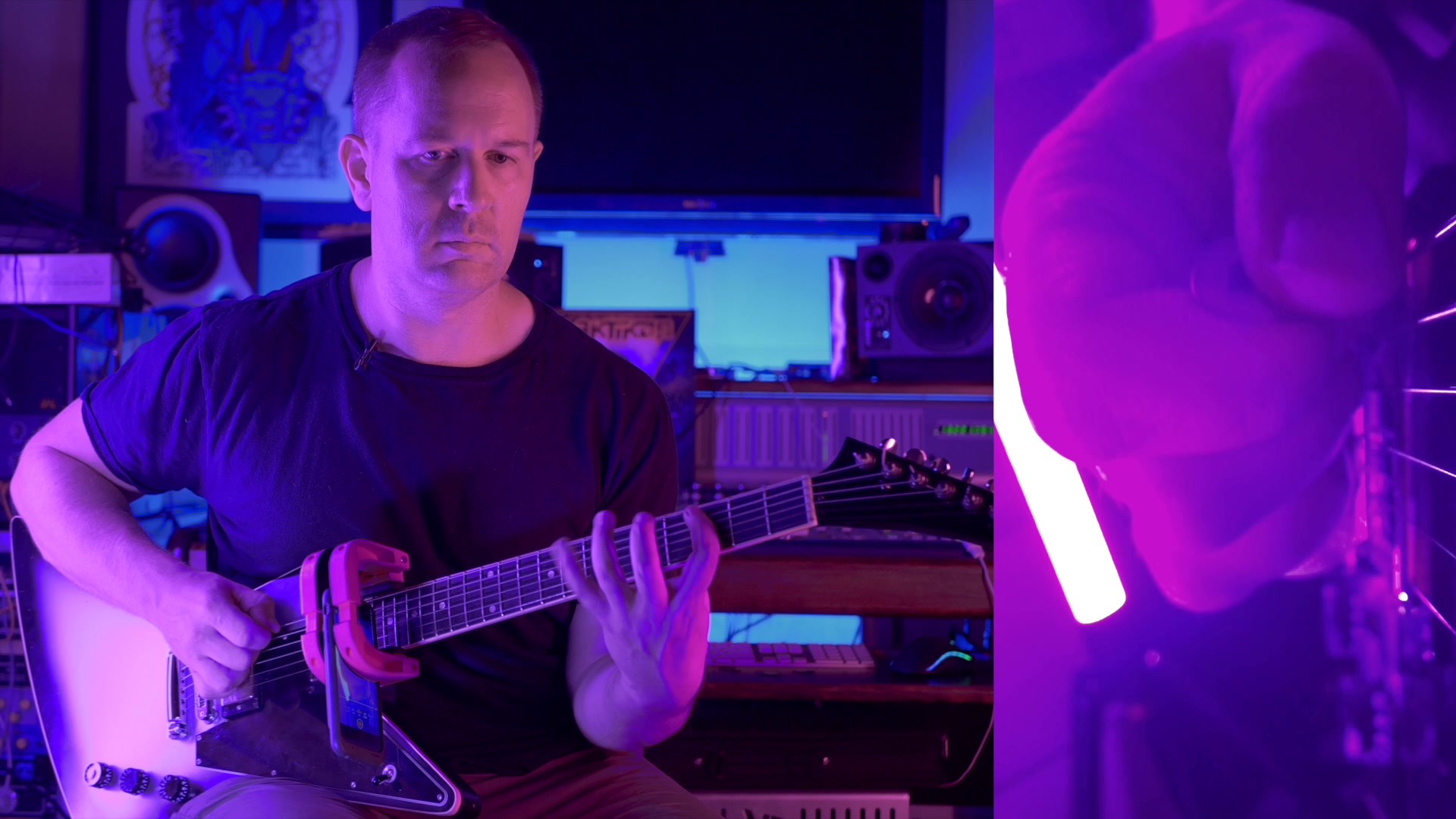 Like many rock players, Brendon’s slower speed primary motion is actually DBX, transitioning smoothly to DSX as he speeds up. In this example he’s got one foot in both techniques as he executes the E string notes with DSX and the A string notes with DBX.

Steve Morse offers an especially sophisticated example of mixing escape types in his scale playing, where his motion can appear to be double, upstroke, or downstroke escape at different points in the phrase:

As Steve navigates the mixed two- and three-note-per-string fingerings of this scale sequence, the occasional upstroke rest strokes are the clue that something about the motion is changing from string to string:

Close up, the B string offers an interesting example of the adjustments Steve is making. The first note starts out with the downstroke escaped, the second note looks trapped but with Steve’s usual curvature, and the third note escapes on the upstroke, so he can switch strings. Here’s the entire sequence:

Steve’s not playing at shred-level speeds here, but what he’s doing is still pretty fast for the complexity of the line that he’s picking, and the kind of fine adjustments he’s making while he does this. This type of fine motor adjustment at a relatively high rate of speed would have to be memorized to be done with any kind of accuracy, and this would take time and practice.

On paper, an appeal of double escape playing is that it would seem like less work to learn since it is one motion that can switch strings in any direction. But as these examples show us, it’s not always one motion in actual use.

Instead, using double escape as a primary motion really appears to be a starting point for lots of subconscious tailoring on a phrase-by-phrase basis. At slower speeds, players like Molly, Olli, and Steve make consistently double escaped motions throughout entire phrases. But as tempos increase, or when confronted with fingerings that could be done with single escape motions, these players tweak the primary motion accordingly.

Why do they do this? We’re not sure, but we can only assume that there is some benefit in terms of efficiency, simplicity, or accuracy. Either way, what this tells us is that developing double escape technique doesn’t necessarily offer a learning short cut compared to an approach that requires mixing and matching other motions, since mixing and matching is precisely where many of these great players appear to end up eventually. They’re just doing it from a double escape starting point.

Figuring out and memorizing slightly different joint motions for different phrases in your vocabularly can only occur with lots of playing time. And this is really no different from the amount of work that players of any other technique have to do to build out a wide-ranging vocabulary.

Another appeal of primary double escape as a picking style is that it would seem to be ideal for improvisation. If the motion can execute both upstroke and downstroke string changes, then in theory the technique has fewer restrictions or “rules” than a style like single escape picking, which requires a certain number of notes per string that won’t fit with every phrase.

But viewing great improvisers like Steve Morse in slow motion makes the case that double escape playing is in fact just as structured and memorized as any other picking style. Playing guitar with a pick requires executing complex sequences of motions at high speed with high accuracy. And such tasks are generally memorized at the level of the motions themselves. And somewhat ironically in the case of double escape players, those motions are very often reduced to simpler strategies like single escape when possible.

Ultimately, building out wide-ranging improvisational vocabulary entails a certain amount of mechanical memorization, and double escape players are as bound to this as players of any other style. Their choices are also apt to be just as arbitrary, where even world-class pure alternate pickers rarely seem to play lines like Eric Johnson’s famous pattern of fives, even though this pattern is very common among economy players in lots of different musical styles.

Whatever the reason, it is clear that picking technique exerts a strong subconscious influence on the lines you choose to play. The net effect is that double escape players don’t necessarily have bigger or more creative vocabularies than players with other picking techniques, just different vocabularies.

< PREV: Primary Plus Secondary Motion
|
NEXT: DWPS Economy >
Return to: