The forearm joint generates a curved picking motion by spinning the forearm on its axis.

Elbow motion moves the entire forearm and hand back and forth, but it’s not the only motion mechanic to do so. The forearm joint also does this, just in a different plane, through a process of rotational motion:

Even though joints like the elbow trace a curved path when they move, we reserve the term “rotation” for forearm motion because it actually causes the arm to spin along its axis.

One of the most famous examples of a purely rotational forearm motion mechanic is Eddie Van Halen’s famous tremolo technique: 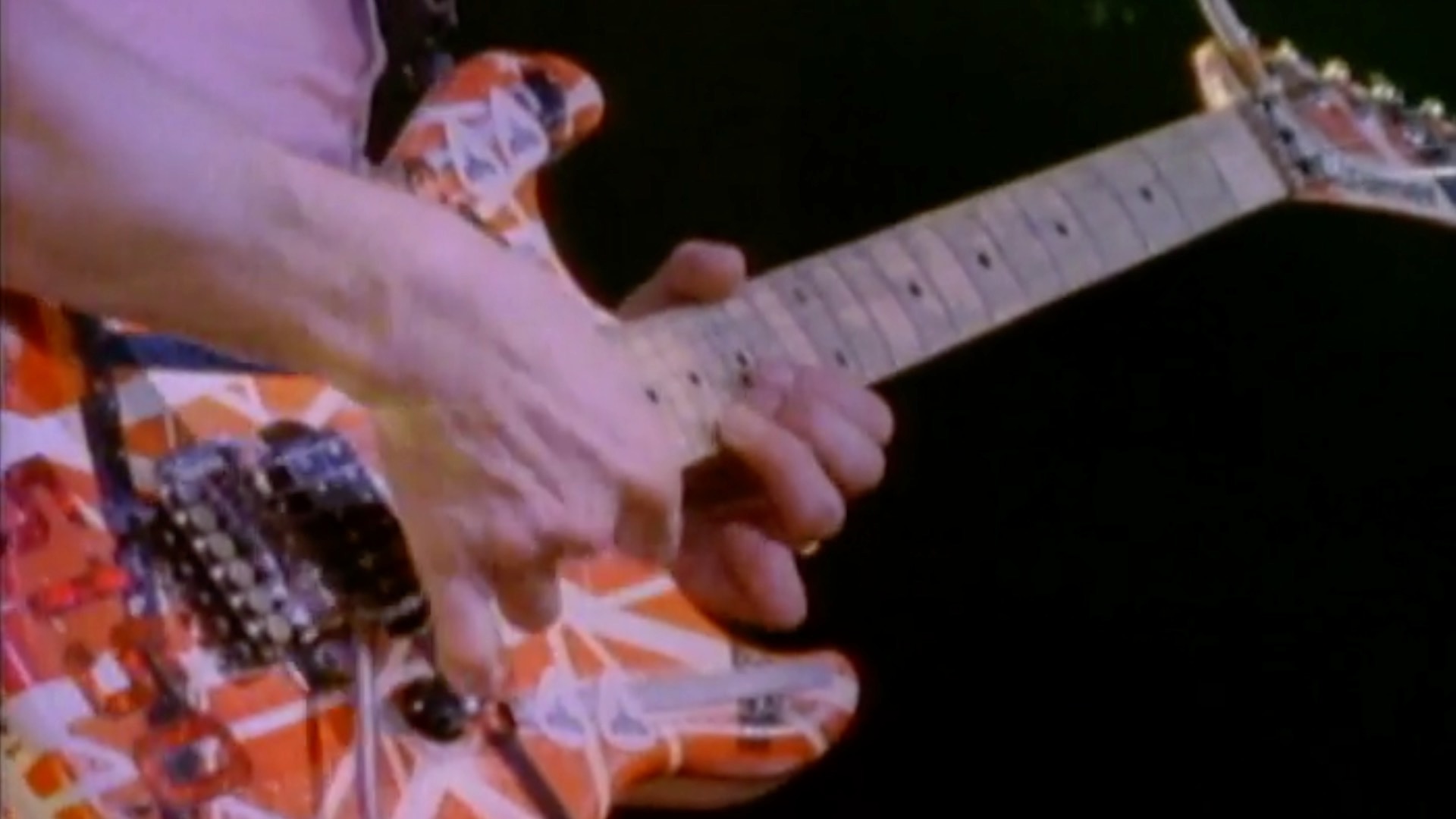 In Eddie’s technique, the arm and hand are seemingly fused together, spinning in space as one unit. This is a textbook depiction of forearm joint rotation.

It’s hard to see from this perspective, but Eddie’s forearm rotation is actually a USX motion, where downstrokes move toward the body of the guitar, and upstrokes move away from it, into the escape zone. If we switch the camera angle, this becomes much clearer:

The escape trajectory of Eddie’s forearm motion is super obvious here, with upstrokes pulling way up into the air above the strings. So is the downward pickslant this motion requires:

Eddie’s forearm motion is curved, but it’s not DBX because only the upstroke actually escapes the strings. When it does this, the escape angle is more vertical, making it easy to see. So is the downward pickslant, which is greatest at the top of the upstroke thanks to the fact that the arm is rotating.

This curved motion path, which lifts up and out of the strings in almost vertical fashion, is maintained even when we straighten out the wrist and perform the motion while resting on the bridge. Here’s metal professor Joe Stump’s forearm-driven picking motion:

Technically, there may be a way to orient the forearm so that it produces a motion other than USX. But even if it’s possible, it’s not common. In this respect, the forearm joint is similar to the elbow in that, when it operates on its own, it is mainly capable of only one type of escape motion — in this case, USX.

Eddie Van Halen’s flying tremolo is a textbook example of the forearm operating independently, but some of the most common forearm mechanics in picking are actually blends that include the forearm and wrist working together.

The most famous of these is the Gypsy picking technique, which utilizes a flexed or bent wrist orientation with a 35-degree downward pickslant. Here’s what Joscho Stephan’s form looks like up close:

Because the wrist flex positions the pick farther away from the point of rotation, Joscho’s technique generates a wide gently curved motion path:

Although this motion path still exhibits the characteristic curvature of USX forearm motion, that curvature is now flatter thanks to the introduction of wrist motion. The overall path is closer to a straight line, just on a tilt:

Specifically, in forearm-wrist blended motion, the forearm joint is responsible for the picking motion from the top of the upstroke until the moment when the pick hits string. That’s why this portion of the motion path is curved. If you look at at the forearm during this part of the motion, you can actually see it turning:

But once the pick hits the string, it’s a different story. The motion flattens out, and the pick simply travels forward until it hits, or rest strokes against the next string. If you look at the forearm while this happens, you’ll notice that it’s no longer moving. So the forearm joint isn’t responsible for this part of the motion path — the wrist is. This cooperation, or coupling between the two joints is seamless, and hard to feel, even when you’re the one doing it.

When you view a motion down the strings, and you can see the forearm moving sometimes and not others, and part of the motion path looks curved while another part looks straight, those are good clues that you may be looking at a blend of forearm and wrist motion.